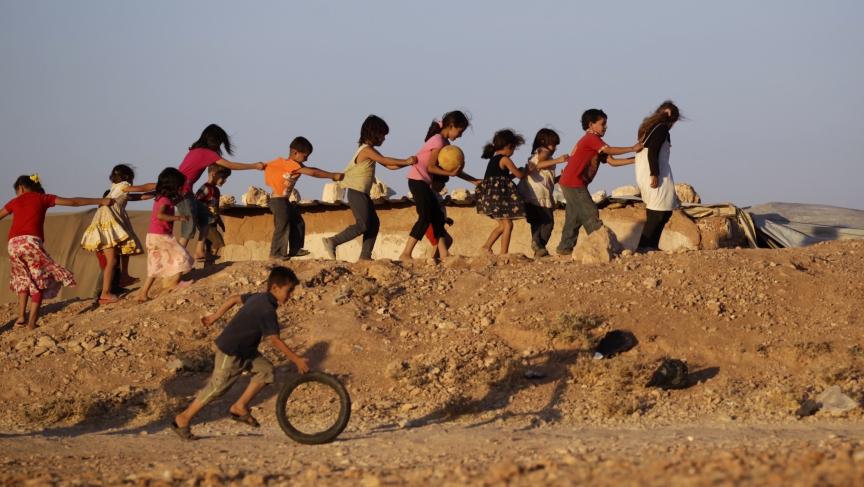 Children, who are internally displaced due to the fighting between rebels and the forces of Syrian President Bashar al-Assad, play inside Al-Tah camp in the southern Idlib countryside July 4, 2014.
Credit:

Living through a war is difficult for any human being, but it's even harder for children.

“When you see it on TV, it’s not like it is in real life.” That’s what one 12-year-old told the BBC’s Lyse Doucet when she was on a recent trip in Gaza.

Doucet has been reporting from Syria and Gaza for years. As she reflected on her trips, she realized that children were not just details in the stories — they themselves had stories to tell.

"Children often make their way into our coverage partly by sheer force of personality," Doucet says. "Some of the most compelling stories that I was hearing during the years of covering Syria's war were coming from the youngest Syrians."

She decided to capture their lives in a documentary called "Children of Syria," which is scheduled to broadcast on BBC2 in the UK.

Some of the worst stories Doucet heard during the war came from children. One girl, freshly escaped from the besieged city of Homs, told Doucet how she ate rats and cats because residents couldn't find food.

"Even my own cat was killed by a sniper," she said. She then had to watch as the cat was picked up from the street by a passerby and taken away to be eaten. Her own father served her cat meat one day — but couldn't bring himself to tell her what she'd eaten until the next day.

Doucet believes that so long as children understand that, there is still hope they may someday be able to recover some of the childhood they've lost.

For now, though, things are not looking good for children in Syria — or in Gaza, another place where children have become victims of war. UNICEF announced on Sunday that 218 children had been killed in Gaza since the start of hostilities.

"A 4-year-old in Gaza has lived through two wars," one father told Doucet in Gaza, referring to the previous Israeli invasion in Gaza in 2012.

For many of the children in Gaza, normal life was when they were living under blockade. "It's the saddest of indictments that children should be describing a situation of a war or a blockade as anything approaching normal, Doucet says. "It's not."