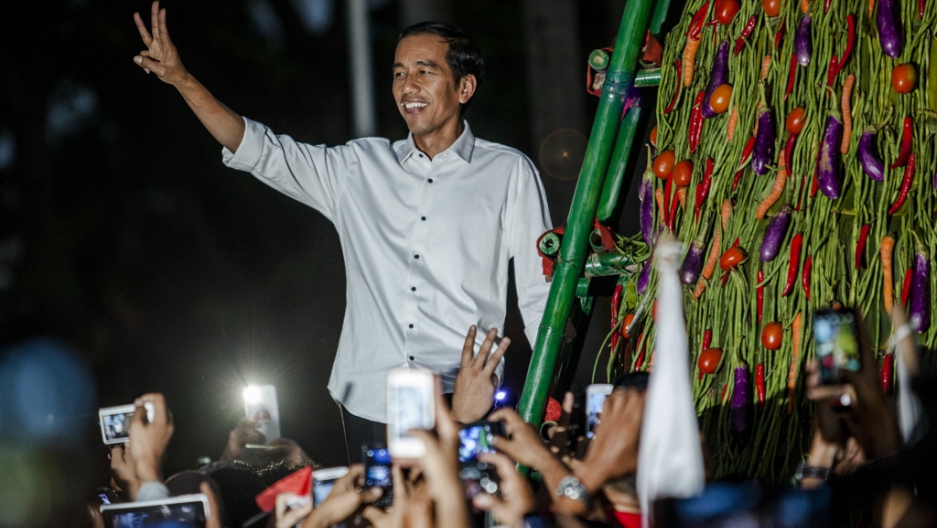 It's been a horrible couple of weeks in the world. If you're still following the news, you're doing it with your head in your hands, peaking through your fingers every now and again to see what terrible thing just happened. We've got the horror in Gaza. The shooting down of MH17. Eastern Ukraine. Syria. Islamic State. Boko Haram. Ebola. And on and on.

When there's so much bad news, it's easy to miss the good news. Here are 13 recent good news stories you may have missed. I know! How did you miss this one?

Turns out, while the world was paying attention to other things, Iran completed the process of converting its 200 kilograms of 20 percent-enriched uranium — enough uranium enriched at high enough level to produce a single nuclear warhead in a short amount of time — into a form that's less of a weapon threat but still viable for producing nuclear energy.

In exchange, the United States is unfreezing a couple billion dollars of Iranian assets.

It's just a start, of course. Negotiations will continue between Iran and US, France, Germany, Russia, China and Britain toward a long term agreement on Iran's nuclear capabilities.

2. There was a ceasefire in the Central African Republic. Warring factions in the Central African Republic signed a ceasefire agreement on July 23. Thousands have died and more than a million displaced in the conflict between Muslim Seleka rebels and Christian "anti-balaka" forces. It's an important first step toward disarmament and peace. We'll have to wait and see whether it holds.

3. The Church of England voted to allow women bishops For the first time, women will be ordained as bishops in the Church of England. After years of movement in this direction, the General Synod passed the necessary legislation with a two-thirds majority on July 14. So it's official.

4. China shut down the first of four coal-fired power plants Beijing has been a smoggy disaster for some time now, and China has plans to close four of the coal-fired power plants that are partly responsible. Officials shuttered the Gaojing Thermal Power Plant on July 23. The other three plants will close by 2016. Natural gas and electricity will make up for the coal, which Beijing hopes to cut to an annual consumption of less than 10 million tonnes by 2017.

5. Meriam Ibrahim, sentenced to death for apostasy in Sudan, arrived safely in Italy In May, Meriuam Yahia Ibrahim Ishag, 27, was sentenced to death by hanging after she refused to renounce Christianity. Making the situation worse was the fact that she was pregnant when the sentence was handed down. She gave birth in a prison in Khartoum, reportedly while shackled. The Sudanese government released her after an intense global outcry but, when she tried to leave Sudan last month, she was arrested again at Khartoum airport and accused of traveling with false papers.

She and her family finally landed safely today at Rome's Ciampino airport. Italian Prime Minister Matteo Renzi met them there.

"Today we are happy, this is a day of celebration," he said.

Later that day, she met with Pope Francis.

Not a bad welcome, you've got to admit. The Finnish capital is dramatically changing how its residents get around. It plans to replace its current public transportation with a system it's calling "mobility on demand," which will integrate a variety of technologies — driverless cars, minibuses, shared bicycles, and a smartphone application — to make private cars totally unnecessary in the city by 2025. It'll be operated as a public utility, offering the kind of point-to-point public transit that every urbanite in the world dreams of. The world's third largest democracy had a very democratic presidential election in which 130 million people voted to elect Joko "Jokowi" Widodo, a reform-minded candidate with a geniue rags-to-riches life story. He defeated former general accused of widespread human rights abuses, Prabowo Subianto. It's the first time in Indonesia's history that a democratically-elected president handed over power to another democratically-elected president.

It's a win for Indonesia and a win for the world. Players for the German national team got bonuses worth between $400,000 and $600,000 (depending whom you ask) for winning the World Cup in Brazil. Superstar midfielder Mesut Özil, who plays for Arsenal in the English Premier League, used that money to pay for the surgeries of 23 sick Brazilian kids."This is my personal thank-you for the hospitality of the people of Brazil. #Bigshoe #Brasil2014," he tweeted.

9. Cambodia reached a political compromise that ended a year of deadlock I know, what a crazy notion — opposition politicians compromising in order to end political and legislative deadlock! It might never happen in the United States, but it happened this week in Cambodia. The opposition Cambodia National Rescue Party (CNRP) agreed to drop a parliamentary boycott after its leader, Sam Rainsy, brokered a deal with Prime Minister Hun Sen. In return, the CNRP got a bit more power — seats on the National Elections Committee and a new deputy speaker position in the parliament.

"From now on, there's a balance of power between the ruling party and the other party that has seats in parliament," a CNRP lawmaker said after the agreement.

10. Crime in England and Wales dropped to its lowest level in 33 years Crime dropped 14 percent in the last year, including 20 percent for violent offenses. The worst year on record was 1995. Crime is down 65 percent from that terrible year. An international team of researchers has designed a vaccine that shows great promise for preventing the mosquito-borne disease dengue fever. Researchers gave the vaccine to 6,000 children between the ages of two and 14 years old. After two years, 56 percent of the children were still protected from virus. That number will have to improve for the drug to be approved and manufactured, but the team is running a second study in Latin America and the Caribbean. They'll know more once those results are in.

12. Shinzo Abe announced that he wants robots to compete at the Tokyo Olympics If Prime Minister Shinzo Abe has his way, the Tokyo Olympics will feature robots.

Abe was visiting a robotics factory last week when he told reporters, "In 2020 I would like to gather all the world's robots and aim to hold an Olympics where they compete in technical skill."

He didn't elaborate. Sounds both awesome and terrifying.

13. A paralyzed porcupine in Sao Paolo got a wheelchair!

Last but certainly not least: clearly the most uplifting AND most important news item of the past few weeks — at a zoo in Sao Paolo, a paraplegic porcupine slated to be euthanized is now zipping around in his new wheelchair. Zookeepers said the wheelchair only cost five dollars to make using plumbing pipes.

Sure, you've seen a million videos of pet dogs scooting around with similar contraptions. But this is a porcupine. In a zoo. In Brazil.

If that's not special enough for you, consider this information from KTVU:

"The porcupine has been at the zoo in Sao Paolo since May after being rescued from a nightclub."

Any questions? Didn't think so.