You must have read or listened to tons of stories about William Shakespeare, and how he’s still relevant.

Stories about kids performing his plays. Prisoners performing them. Who knows, maybe even astronauts have recited bits from Hamlet on the International Space Station. If they haven’t yet, they will one day.

Shakespeare is bigger than this world; he’s universal. But at the same time he’s local too.

“Shakespeare’s language is full of resonances of Latin, Spanish or Germanic terms,” she says. “I think it was Borges who talked about him as the most Spanish of writers. The Irish have often said it’s a myth he’s English, he’s actually Irish.”

Shakespeare sounds good in just about any language. He translates well because he’s, well, Shakespeare. But it can’t hurt the language he wrote was — and is — such a hybrid tongue. German, French, Latin, Old Norse, Celtic languages — they all had a say in how English evolved.

That’s reflected in how Shakespeare’s Globe presents his plays today. The Globe is a reconstruction of an Elizabethan playhouse in London. It was founded in 1997 by American actor and director Sam Wanamaker. It’s an open air theater — always a hazard in the British climate.

South African actors from the 'Umabatha: the Zulu Macbeth' production perform a mock fight in a rehearsal at Shakespeare's Globe. The play was performed at the Globe entirely in Zulu.
Credit:

Two years ago, the Globe staged performances of Shakespeare plays in 37 different languages, to coincide with the London Olympics. Right now it has a production of Hamlet touring the world — every single country, even North Korea. That’s the plan anyway.

The Globe has also performed Shakespeare in what’s called original pronunciation, or OP.  When the Globe first did it a decade ago, OP hadn’t been heard for 400 years.

You may think that OP would make Shakespeare more difficult to understand, but it doesn’t really. (Listen to the audio above to hear an example.)

David and Hilary Crystal have collaborated on a book about places in Britain that shaped the English language. I asked David Crystal, Britain’s best-known linguist, how he figures out what Shakespeare’s English sounded back then. How does know, for example, that the word heath was pronounced “heth.”

For one thing, he says, he looks at the rhymes.

Heath comes right at the start of Macbeth. 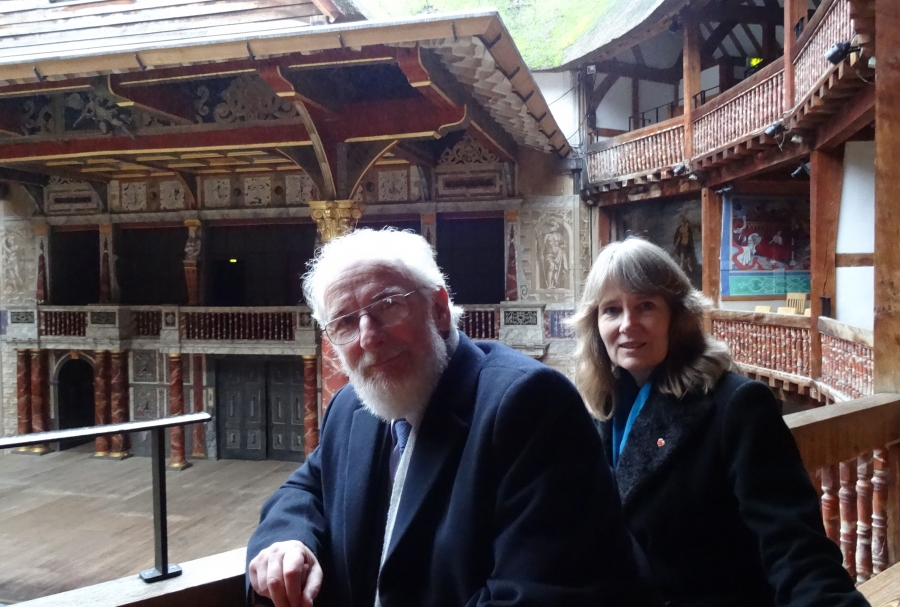 David and Hilary Crystal at Shakespeare’s Globe in London. The Crystals are the authors of “Wordsmiths and Warriors: The English-Language Tourist’s Guide to Britain.”
Credit:

First Witch: When shall we three meet again?

In thunder, lightning, or in rain?

Second Witch: When the hurlyburly's done,

When the battle's lost and won.

Third Witch: That will be ere the set of sun.

First Witch: Where the place?

Second Witch: Upon the heath.

Third Witch: There to meet with Macbeth.

There are other clues too.

“You look at the puns that don’t work in modern English that worked in Shakespeare’s time,” says Crystal. “The spellings are a good guide, that’s evidence as well.”

Historians and linguists have been putting the evidence together—and finding audiences who want to hear actors using OP.

“About a dozen plays have been done in OP,” says Crystal, who is a big proponent of the style. “It’s become a bit of a movement now.”

But however the words are pronounced, it’s the words themselves that have made Shakespeare so pivotal in the story of the English language. There are, of course, the words he’s said to have invented. There was a time when lexicographers attributed as many as 2,500 English words to him.

It’s currently about one thousand. Still, “if I introduced one word into the English language, I’d be delighted,” says Crystal

That’s probably how the person felt who came up with selfie. (Shakespeare might have liked that word.)  Which brings up another point about how words come into being:  we’re not sure who coined selfie. We just know of its first recorded use, in Australia twelve years ago. It’s the same with Shakespeare—his plays were often the first recorded use of many English words.

“Definitely Shakespearean are all the words beginning with un-,” says Crystal. “Like Lady Macbeth asks the gods to unsex her, because she wants her feminine qualities removed. Now words like unsex and unshout and uncurse are dramatic literary coinages.”

Coinages that set a pattern we still follow. Unamerican. Uncool. (though these un-adjectives aren’t as playful as Shakespeare’s un-verbs.) Who can forget Don Johnson’s immortal words in Miami Vice? “That was uncool, lady. That was major uncool.”

Just as lasting are Shakespeare’s idioms: My Lord and Master; piece of work; as good luck would have it; kill with kindness.

“With language, you should be the master and not the servant,” says Crystal. “Shakespeare teaches us to dare to be creative, to push the rules a little bit. If the word isn’t there, make one up.”

Make a word up, or change its meaning, or steal one from another language. English is full of that, thanks in large part to Shakespeare.