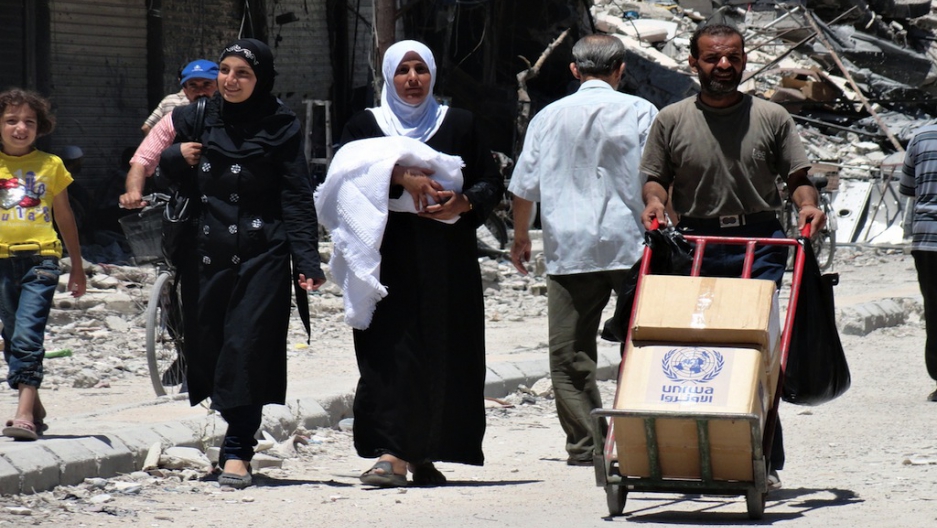 A resident of Syria's Yarmuk Palestinian refugee camp, south of Damascus, pushes a trolley loaded with a box of goods distributed by the United Nations Relief and Works Agency (UNRWA) on July 17, 2014. Forces loyal to President Bashar al-Assad have been laying siege to Yarmuk since last year.
Credit: RAMI AL-SAYED
Share

BEIRUIT — The United Nations Security Council finally adopted a resolution authorizing UN agencies and their implementing partners to deliver aid across the Syrian border without requiring the government’s consent. The government had completely ignored a February resolution calling for it to let aid reach all parts of Syria, including areas controlled by armed groups.

That’s a step in the right direction, if aid finally starts flowing. But it shouldn’t distract attention from another crucial demand the Security Council made back in February: for the warring parties to end indiscriminate attacks against civilians.

I recently visited three hospitals in Turkey and two camps for internally displaced people across the border in Syria. Sitting in his hospital bed, 15-year-old Omar told me how his life changed forever on June 26. He had been on his way to visit his grandfather in the besieged Syrian city of Aleppo when an airstrike hit just a few meters away from his taxi, far from the front lines. “I was covered with dust,” he told me, “I could not feel my body. I looked around and all I remember seeing was people on the ground not moving.” Omar, who lost his left leg, said his biggest agony was that he won’t get to play football anymore.

The bomb that took away Omar’s leg was a barrel bomb, a weapon that has become a particularly nasty hallmark of the government’s military campaign in Aleppo. Made of an oil drum filled with explosives and sharp metal pieces, a barrel bomb is a crude, unguided, high-explosive bomb that is usually dropped from a helicopter, often from high altitude. Notoriously inaccurate, the bombs have frequently hit populated residential neighborhoods, killing and wounding thousands of civilians and striking terror among the local population.

Since late last year, the Syrian government has intensified attacks on Aleppo and its surrounding areas in an effort to retake opposition-controlled parts of the city. Using satellite imagery, Human Rights Watch documented 340 sites damaged between October 31 and last February 20 as evidence of government shelling and bombardment, including barrel bombs.

The Violations Documentation Center, a local monitoring group, has collected the names of 3,766 civilians killed in aerial attacks in Aleppo since November, over 1,500 of them since the UN Security Council’s February resolution.

The attacks have forced thousands to flee, compounding an already disastrous humanitarian situation. The camps and hospitals on the Turkish-Syrian border were packed with people who had fled Aleppo and its surroundings since the government intensified its military campaign.

Armed opposition groups have also failed to abide by the Security Council’s February resolution, killing civilians through indiscriminate use of car bombs, mortars and rockets on government-held parts of Aleppo.

A 45-year-old plumber fled to the Bab al-Salama camp in Syria when a barrel bomb fell on the mini bus he was in, killing his wife, and leaving him with their seven children. A family from the Sheikh Maqsoud district of Aleppo fled to the same camp when a bomb destroyed five or six houses on their street a few weeks ago, causing shrapnel injuries to a neighbor that cost him a leg.

A woman had come to Turkey to give birth after a bomb fell a few meters away from her outside her doctor’s clinic. The details differ, but the main story is the same: people were getting killed and injured in the government’s bombing campaign in areas far from the front lines and without military targets in the vicinity.

While thousands had fled Aleppo, many remained, particularly the poor that had nowhere to go. In Bab al-Salama camp a man said that even though a barrel bomb had killed several of his relatives, he would have to return. “I have a family to feed,” he told me.

The Security Council threatened “further steps” if its February resolution went unheeded. Over 1,500 civilian deaths later in Aleppo alone, it’s crucial for the Security Council to act. It should impose an arms embargo and targeted sanctions on the government and non-state armed groups committing these attacks, and refer the situation in Syria to the International Criminal Court.

Diana Semaan is a research assistant at Human Rights Watch in Beirut.