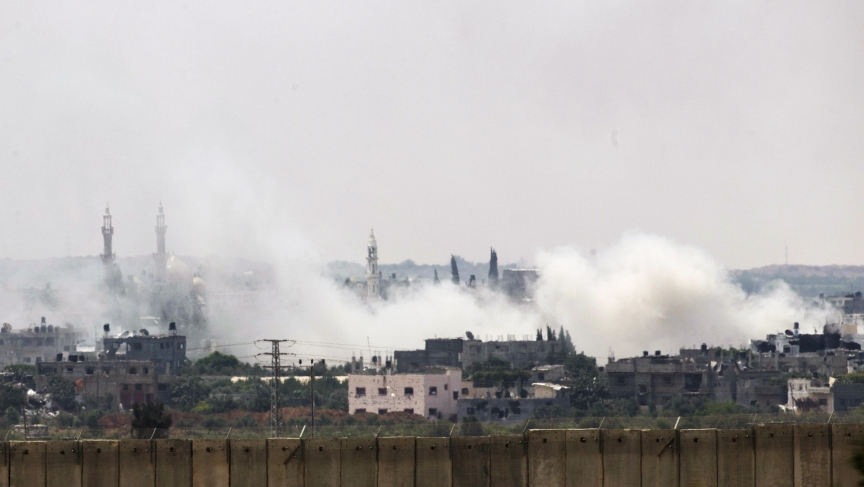 Smoke rises after an Israeli strike over the northern Gaza Strip Tuesday. Military and civilian casualties are mounting as Israeli forces push into urban areas like this.
Credit:

The incursion into Gaza is exacting a price on the Israeli military. The Israeli Defense Forces said Tuesday that 27 of its soldiers have been killed, and more than 120 wounded. Another soldier is missing in action.

That might not sound like a lot compared to the death toll among the Palestinians, which now exceeds 600 — including many civilians and dozens of children. But 27 dead makes this conflict one of Israel's bloodiest in recent years. In fact, the toll is greater than the combined number that the IDF has suffered in all of its other conflicts in Gaza since 2005, when Israel ended its occupation of the Palestinian territory.

For one, they're actually fighting. Several IDF officers in Gaza have told the media they’re surprised at how Hamas fighters are standing their ground instead of using their usual shoot-and-scoot tactics.

That's because Hamas has been able to draw the IDF into areas of Hamas' choosing. Positions are heavily fortified, allowing Hamas fighters the ability to shoot at Israeli troops from many angles. There are Iraq-style improvised explosive devices and booby traps on streets where Israelis are likely to move. Tunnels also allow ammunition and replacements to move easily from place to place.

And because this is all happening in urban terrain, the IDF loses its edge in terms of technology and firepower.

The Israeli military knows all of this. In the past, they've largely avoided entering areas like the ones Hamas has been able to set up. But Hamas isn't just on defense. Because of its rocket attacks and infiltrations into Israel — their version of a ground offensive — they've forced Israel into acting.

The raids do little damage and fighters rarely survive. But the Israeli government has decided it has to destroy them, and that means pushing into the urban centers of the Gaza Strip to find their points of origin. Israel has also indicated it wants to destroy another network of tunnels that connect command centers and many of the rocket launching sites.

The downside, of course, is that civilians are put at risk. The IDF says Hamas has deliberately placed its military assets and positions in densely populated areas, often next to — or under — schools, mosques and hospitals. They also say Hamas has not invested in shelters for the civilian population. Palestinian activists argue that Gaza is simply so small that there's nowhere else to go.

Hamas appears to have been preparing for a conflict like this for years. It has invested huge resources in building its underground tunnels and fortified defense lines. It has painstakingly accumulated reserves of rockets and missiles. And it has recruited and trained brigades of men and women willing to go on raids into Israel despite the likelihood of death.

These are all tactics similar to the ones Hezbollah used when Israel invaded Lebanon in 2006, and Hamas may hope to emulate Hezbollah’s perceived success in that war. The goal would be to fight the IDF to a stalemate and deny them the ability to say it they've achieved their objectives.

Israel is unlikely to hand Hamas such a propaganda coup. That suggests that — despite US and international pressure for a ceasefire — the fighting is likely to continue.