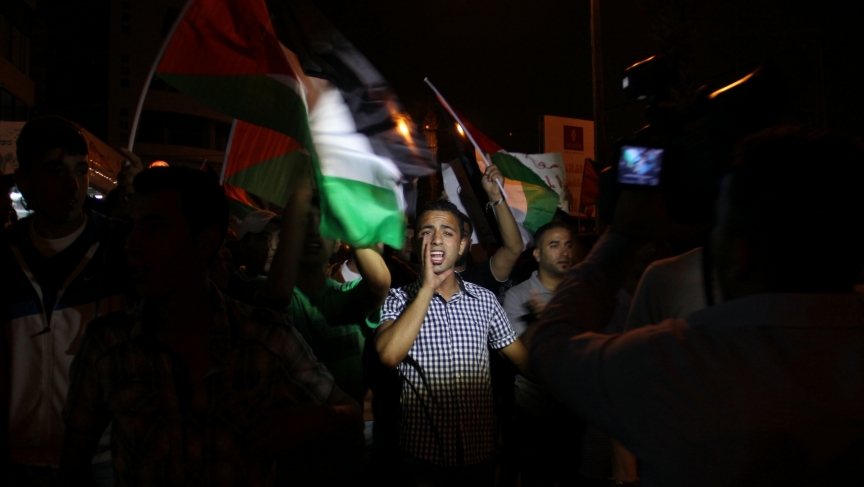 A young Palestinian man chants against Israel’s offensive in the Gaza Strip as he marches from Ramallah toward the Israeli settlement and military base at Beit El.
Credit:

After almost two weeks of rockets and air strikes, more than 500 Palestinians are dead in Gaza.

Many in the Palestinian West Bank are angry and some have taken to the streets to protest. But these protests are usually quickly shut down — often by Palestinian's own security forces.

A week ago, a few hundred Palestinians marched though the street of Ramallah chanting against Israel’s offensive in the Gaza Strip. Draped in traditional Palestinian Keffiyeh they hoisted placards reading: “It’s not war on Gaza, it’s genocide.”

Their destination was Beit El, an Israeli settlement and military installation in the heart of the West Bank near Ramallah.

But they were stopped before they could reach their destination. Not by the Israeli army, but instead by Palestinian security forces. A row of about 40 Palestinian police officers with riot shields and batons blocked their path.

The crowd chanted for them to open the road, but the police held their position. Now, the crowd's anger is not just directed at Israel and its assault on Gaza, but also at the Palestinian government.

“We couldn’t make it, because as you can see we have the Palestinian security forces and they blocked the way in front of us to reach there,” says Bassma who asked to use only her first name.

Under the Oslo Accords, American-trained Palestinian security forces are required to cooperate with Israel. This cooperation includes controlling protests, arresting activists and militants and even planning the assassination of a shared Hamas political foe.

And when the Israeli army wants to enter a Palestinian administered area, Palestinian forces stand down. Bassma is appalled by the deal.

In the last two decades, security cooperation has remained intact, though often covertly. Only at the height of the second intifada, for a few years, did the agreement break down, with some in the Palestinian security forces turning against the Israeli army. But even during Israel’s Operation Cast Lead in 2008, which killed more than 1,300 Palestinians in Gahza, the Palestinian Authority forces in the West Bank continued cooperating.

“One of the most effective cards is stopping the security cooperation with Israel. Because Israel should know there is a price for its continuous policies,” he says.

Many at the protest are asking the Palestinian leadership to use their bargaining chips now, as a way to help end the offensive in Gaza and save Palestinian lives.

“They are standing still. ... They have not taken any measures to alleviate the pain people are living in,” says Bassil Abed, a 22-year-old student.

For him, cooperation with the Israeli army, particularly while that army attacks Gaza, is unacceptable.

As Israel escalates its offensive in Gaza, it’s unlikely there’ll be any disruption in cooperation. And for many, like Bassil, this feels doubly oppressive.