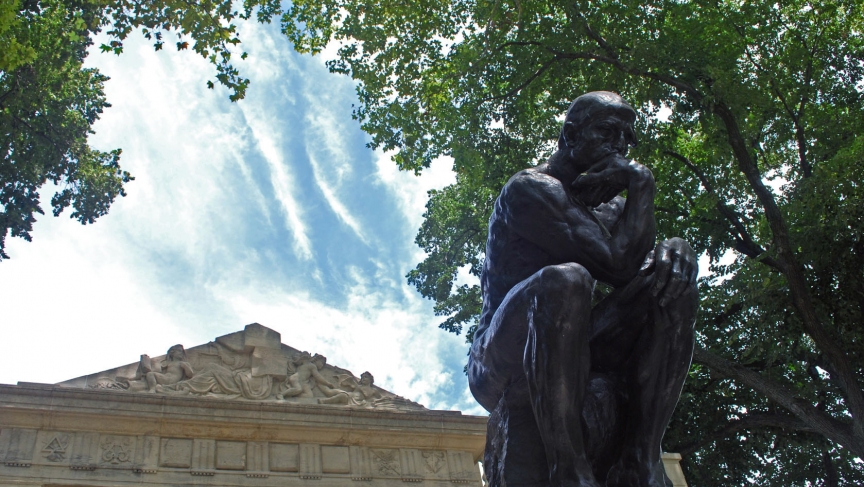 "The Thinker," by Rodin, in front of the Rodin Museum, Philadelphia, PA
Credit:

In 1654, scientist and philosopher Blaise Pascal wrote: “All of humanity's problems stem from man's inability to sit quietly in a room alone.” Now, there's some science behind that statement.

A recent study in the journal Science found that many people choose to self-administer an electrical shock rather than sit quietly in a room alone with their thoughts.

Erin Westgate, a PhD student in psychology at the University of Virginia, says she hadn’t seen Pascal’s quote before she and her colleagues conducted the study. But when she first heard it, she laughed hysterically.

Our inability to be alone with our thoughts may not be the root of all of our problems, but one thing is certain: we are really bad at it, Westgate says — at least under the circumstances the researchers tested.

The researchers brought people into their lab and told them they were going to be asked to sit alone in an empty room for ten to twenty minutes. They took everything away from them — cell phones, watches, iPods, whatever. Next, they showed the participants some random pictures. Finally, they pointed out a nearby button, which, when pressed, would give them an electrical shock.

The researchers then asked the test subjects to sit and entertain themselves with their own thoughts for ten to twenty minutes. There were only two rules: they weren’t allowed to get out of the chair and they couldn't fall asleep. They encouraged the participants to enjoy themselves with pleasant thoughts. And oh, yes: if you’d like to receive an electric shock again, go ahead and press the button.

Westgate says the research team had debated this aspect of the study. It was ridiculous, some thought, to think that people would choose to shock themselves. They were astounded by the results.

“They’d already told us they didn’t like the shock. They’d already told us they’d pay not to receive a shock again,” says Westgate, with bemusement. “So we weren't really expecting that people would do that. But at the end of the study, we found that about 70 percent of the men and 25 percent of the women chose to shock themselves during that twelve minutes, instead of just sitting there and entertaining themselves with their thoughts.”

“Now the big question is, ‘Why would someone do this?’” she says. “Why is it so hard to entertain ourselves with our thoughts that we’re willing to turn to almost anything, it seems, to avoid it?”

Studies at universities often start with college students, so the researchers wondered if their young subjects were just overly fidgety, not being allowed to tweet or text or check their e-mail. So they reached out to the wider community for volunteers — and they got pretty much the same results.

“These were adults, far past college age,” Westgate says, “and we had them [sit] in their home — without the shock, since we weren’t there to supervise them — and asked them to do the same thing: just sit there at a time of their own choosing, when they were alone, and entertain themselves with their thoughts for ten to fifteen minutes — and again they were terrible at it!”

Over half of the participants confessed to cheating. They weren't supposed to get on their phones or talk to other people, but over half said they had. “And those were just the ones who were honest with us,” Westgate says.

"This line of research started with a whole different question, which was, ‘How can we help people think better?’" Westgate explains. "What we found, to our surprise, is that people really can’t do this very well at all. Our question changed to, ‘What's going on here?’"

Perhaps it is an issue of mental control, she speculates. Most people often get lost in thought — while walking down the street, taking a shower or remembering a recent vacation. “So it's not that we can never enjoy thinking,” she says. “But something about doing it on command, at a certain time — and deliberately — is really, really hard, which suggests that it may be an issue of mental control.”

They did find a “very, very small correlation” between people who had experience with meditation and the ability to do the kind of thinking tested in the study, but Westgate says that didn't explain the results. It wasn’t the key they were looking for. Maybe if they focused specifically on people with more meditation experience they would get different results, she wonders.

So, how hard is this, really? It must vary a great deal, based on temperament and life experience, right?

So, try it out at home. All you need is a timer and an empty room. Let us know how you do.

This story is based on an interview that originally aired on PRI's Science Friday with Ira Flatow.