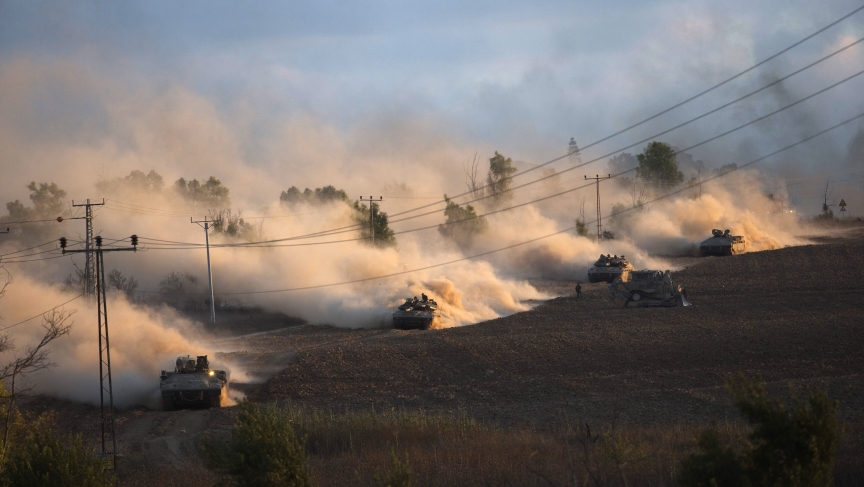 Israeli tanks maneuver outside the northern Gaza Strip on July 18, 2014. Israel intensified its land offensive in Gaza with artillery, tanks and gunboats on Friday and warned it could "significantly widen" an operation Palestinian officials said was killing ever greater numbers of civilians.
Credit:

After days of Israeli airstrikes and Hamas rocket attacks, the Israeli military moved into Gaza on Thursday for what it called a limited mission to close off tunnels used by Hamas to infiltrate Israel.

It is Israel's third ground assault into the Hamas-controlled Palestinian territory since it launched a large-scale operation into Gaza in 2008. A second followed in 2012. So why might this operation succeed where the past two didn't?

"This time it's certainly the diplomatic context," says Michael Oren, an American-Israeli historian and former Israeli ambassador to the US. "Egypt is under a government that is deeply hostile to Hamas. Hamas is very isolated in the world."

When Israel made its last incursion into Gaza in late 2012, Egypt was led by then-President Mohammed Morsi, a member of the Muslim Brotherhood. That government enjoyed friendly relations with Hamas, which is an offshoot of the Brotherhood.

But now, under the stridently anti-Brotherhood presidency of Abdel Fattah al-Sisi, Egypt is openly hostile to Hamas. The Rafah border crossing between Gaza and Egypt has remained closed throughout the latest conflict, and Israeli officials have even praised Egypt in the media.

"So Israel today enjoys advantages that it did not enjoy in the past," Oren says. But he cautions that even with the aid of a sympathetic neighbor, success in this latest round of fighting is far from guaranteed.

"As with so many military conflicts, you know how they start, but you don't know how they end," Oren says. "One of the lessons of the past is that it only takes one errant tank shell that kills a great number of civilians in the course of the battle, and the diplomacy surrounding the battle can change and give rise to tremendous shifts in public opinion."

One of those moments may possibly have come on Wednesday, when four young children were killed while playing on a beach in Gaza City. The strike took place near a hotel where many foreign correspondents are based — some helped administer first aid to the victims — leading to widespread coverage of the incident.

Oren places the blame for such mistakes at the feet of Hamas, though. While he believes casualties are lighter compared to past fighting, the proximity of civilians and combatants is the real reason for civilian deaths.

"Does that mean that civilians won't continue to suffer? They probably will," Oren says. "But again, it's because Israel is fighting an enemy that is using this population as a human shield. It's dug in deep beneath this population."

As a former ambassador, Oren says he is well aware of how the conflict is often viewed: overwhelming Israeli firepower vs. a penned-in population in Gaza. Because of that, he believes, Israel does need to try to explain its decisions to the world. But, he admits, "It's very difficult to translate our surreal situation here."