It's not everyday you get an invitation to a state dinner at the White House. And 12-year-old Kinnan Dowie earned his. The homeschooled sixth-grader from Rhode Island submitted a winning recipe for the 2014 Healthy Lunchtime Challenge.

The Challenge is a nationwide recipe contest designed to promote healthy eating among America's youth. And the 54 winners from around the country end up at a Kids' State Dinner at the White House, hosted by Michelle Obama.

Dowie and his family traveled to DC for this year's dinner, being held tomorrow, where some of the winning dishes will be served. Dowie says he always loved cooking with his mom and grandmother, so he was excited to when he heard about the healthy recipe contest for kids ages 8 to 12.

He put on his apron and got to work in the kitchen. He took out pots and pans, all kinds of traditional spices, and experimented for hours. He came up with something he calls "Mediterranean kebab wraps with cilantro tabbouleh."

"I enjoy cooking with my grandmother, who is of Middle Eastern heritage,” says Dowie. “I like to experiment with our family recipes and try to make them healthier and still delicious. I decided to make the kebabs out of ground turkey rather than the traditional lamb. Since ground turkey can sometimes be bland, I tried adding some healthy herbs to boost the flavor. I serve this meal with a refreshing cucumber salad. Yummy!"

And now you can serve it, too, if you want. Here's Kinnan Dowie's recipe.

For the Cilantro Tabbouleh:

For the Refreshing Cucumber Salad: 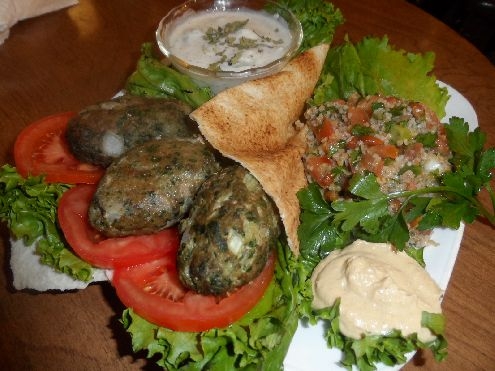 To make the Mediterranean Kebab Wraps: In a large bowl, mix ground turkey, parsley, cilantro, and onion. In separate bowl, mix the spices and garlic. Add to the turkey and mix well.

Form the kebabs by hand. Each should be about 4 inches long and about 1½ to 2 inches wide. Place on lightly greased tray. Lightly brush the kebabs with olive oil. Place in preheated broiler on low (or grill) and cook for 15 minutes, flip them over, and cook an additional 15 minutes. Place in pita-wrap with lettuce, tomatoes, and hummus.

To make the Cilantro Tabbouleh: In a large pot, bring 1½ cups water and pinch of salt to boil over moderate heat. Add the bulgur, stir, remove from heat, and let cool. Add cilantro, scallions, tomatoes, lemon juice, ¼ cup olive oil, and mint to bulgur and stir.

In a small sauté pan over moderate heat, warm the remaining tablespoon of olive oil. Add the pine nuts and toast until lightly brown, about 2 minutes. Let cool, then toss into salad. Season with salt and pepper.

To make Refreshing Cucumber Salad: In a large bowl, add all of the ingredients and mix thoroughly. Chill before serving.

Here's a video of the judging of the 2014 Healthy Lunchtime Challenge: