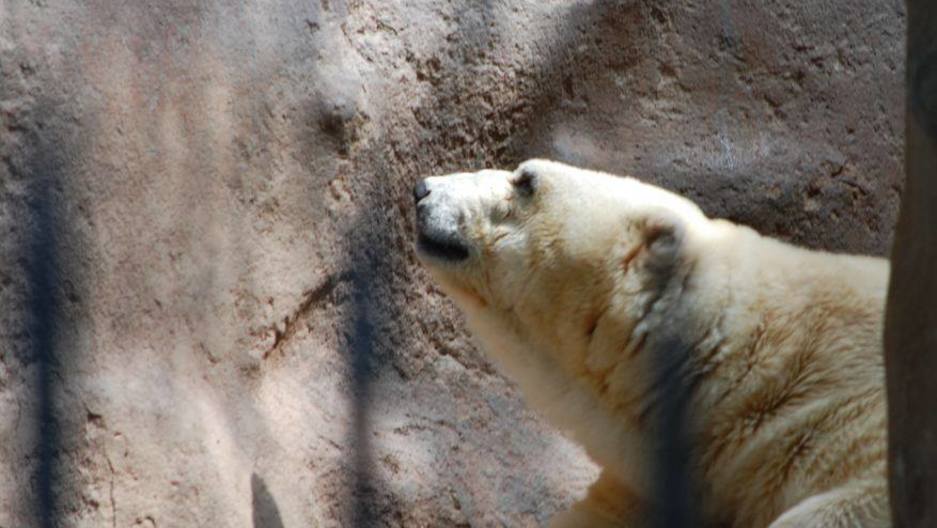 Arturo the polar bear is said to be in bad shape.
Credit:

Arturo the polar bear makes his home far from his native territory. Arturo lives in Argentina, in a zoo, where he's described as "the saddest animal" in the world.

Arturo's plight, and concerns that he might quite literally be going crazy in his small and overly warm enclosure, came to light internationally this past weekend. Now there's an effort to get Arturo moved from the zoo in Argentina to a special polar bear rehabilitation facility in Canada.

But, unsurprisingly, permits — and politics — are getting in the way of moving the polar bear. The Independent has the latest.

Why Hamas and Netanyahu need each other

Israel says it's attacking Hamas because of Hamas rocket attacks. Hamas says it is launching rockets because of Israel's blockade. Israel says it blockades Gaza because of Hamas terrorists. Hamas says they can't give up their arms unless Israel gives up its occupation of Palestinian territories. It's all very circular and neither Israeli Prime Minister Benjamin Netanyahu nor Hamas officials are being entirely honest.

So the fighting continues. And that seems to be OK with the power players. If Israel were to leave the Palestinian territories, the raison d'etre for Hamas would cease to exist. At the same time, if Netanyahu gave up Palestinian territories to a Palestinian government, he could very likely be out of office. The New Yorker looks at the roots and inconsistencies of the current Israeli-Palestinian conflict.

India spent $2.2 billion giving school kids free lunches last year. And while that may seem a huge sum, the country is getting tremendous bang for its buck.

First off, Indian is feeding 120 million children. By comparison, the US spends over $15 billion a year to feed just one quarter that number of kids. And there's more. PRI’s The World reports, in a two-part story, that school attendance has gone way up since establishing the free lunch program in 1995. There’s also research showing that the lunches can help malnourished children “catch up” in their physical growth, and that the kids do better in school.

Most surprising, though, is the anecdotal evidence that communal lunches can actually help break down the discrimination inherent in India’s caste system.

Gil Kerlikowske, head of US Customs and Border Protection, has announced a million-dollar campaign of radio, TV and billboard ads. The goal? To stop the flow of migrants, especially children, into the US.

In one radio ad, an upbeat jingle speaks of La Bestia, the nickname for the train many Central Americans ride through Mexico and across the border. The lyrics describe it as "the damn train of death.” It was produced in New York and plays on the air in Guatemala, Honduras and El Salvador. In a TV ad, people see a teenager kissing his mother goodbye and thanking his uncle for funding his trip north. In the next scene, the boy is dead in the desert.

But even the stark ads, say some, won't counter the desperation that drives people north. PRI's The World has the details of the campaign, some of the ads, and a graphic showing just where the migrant children are coming from.

The victims of the Costa Concordia are still suffering

Salvagers righted the Costa Concordia this week — that's the cruise ship that ran aground off Italy more than two years ago. But for survivors, the difficulties continue.

Rose Metcalf is a dancer who waited to abandon the ship to help others. She says she has PTSD now and her career is in ruins. She still feels guilty about those who didn't survive and those who received greater physical injuries than she did.

Metcalf talked to The Telegraph about the obstacles she's encountered on her road to normalcy. With the ship afloat again, Metcalf says she would like to get the rest of her possessions back, especially a pearl necklace and diamond ring that got left behind. At least that would be a small comfort.

A quick look on @flightradar24 and you can see the move away from Ukraine airspace pic.twitter.com/lS3OI5O8Ug

Residents of the UK are being urged to stay inside and stay hydrated as a heat wave moves into the country for two days. Temperatures are supposed to get as warm as 32 degrees Celsius (89 Fahrenheit) and not drop below 15 Celsius (59 Fahrenheit). If that doesn't sound like much of a heatwave to you, you're in good company. The Sydney Morning Herald reports that Australians aren't impressed either.