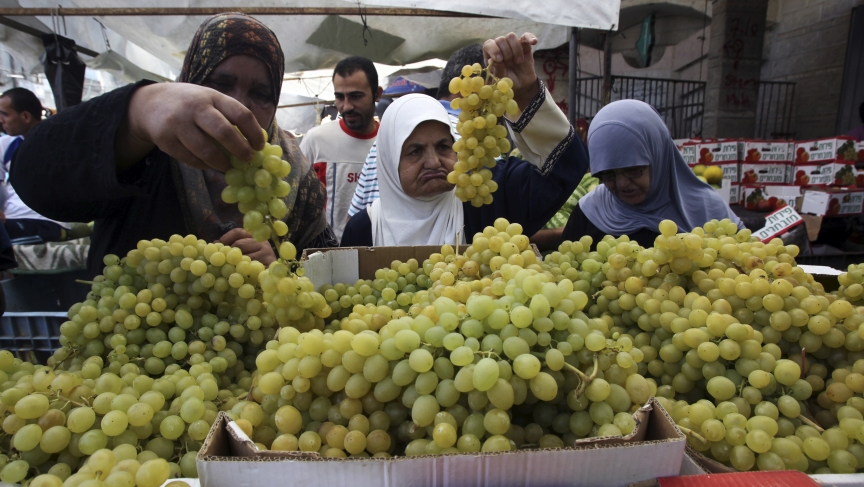 Palestinians shop at a market in Gaza City July 17, 2014. Palestinians rushed to shops and banks on Thursday as a five-hour humanitarian truce agreed to by Israel and Hamas came into force.
Credit:

A temporary truce Thursday gave Gaza residents a chance to get out of their houses and shelters to do a bit of shopping.

The humanitarian truce took place between 10 a.m. and 3 p.m. local time, immediately preceding Israel's launch of ground operations in Gaza. It was requested by the United Nations and other international organizations to provide emergency aid and distribute water and food.

The violence between Hamas and Israel has been taking place during Ramadan, and Gaza residents had found it difficult to get out and shop. Nalan Sarraj, a young blogger living in Gaza, said the truce was a breath of fresh air.

“It’s a new day for all the Gazans. We had a chance to go out for a couple of hours. Some were running around to buy some groceries or go to the bank to get some money or check on family members,” she said, before Israel launched its ground invasion in the final hours of Thursday night.

Sarraj says since the operation began, it’s been very difficult for people to leave their house because, at any moment, they could be targeted. It’s not safe.

“Our daily life has been on pause for days and just to have five hours to breath all over again, it’s overwhelming," she said.

But knowing that it would all end again, she said everyone went about getting errands done as fast as possible.

Sarraj said she helped her mom with grocery shopping. In addition to shopping, Sarraj also used the few hours of truce to check on some of the people who were injured.

“I wanted to check on my brothers and sisters and so I went to the local hospital. I wanted to give them my support," she explained.

Sarraj said she finds it difficult to go to sleep at night. Just recently, a building next to hers was targeted.

"I thought my building was hit. I thought I had lost my family," she recalled.

Sarraj said she gets nightmares and sometimes she wakes up thinking that what has been happening was all a dream.

"But it's not and you face the reality and you have to go through this all over again," she said.