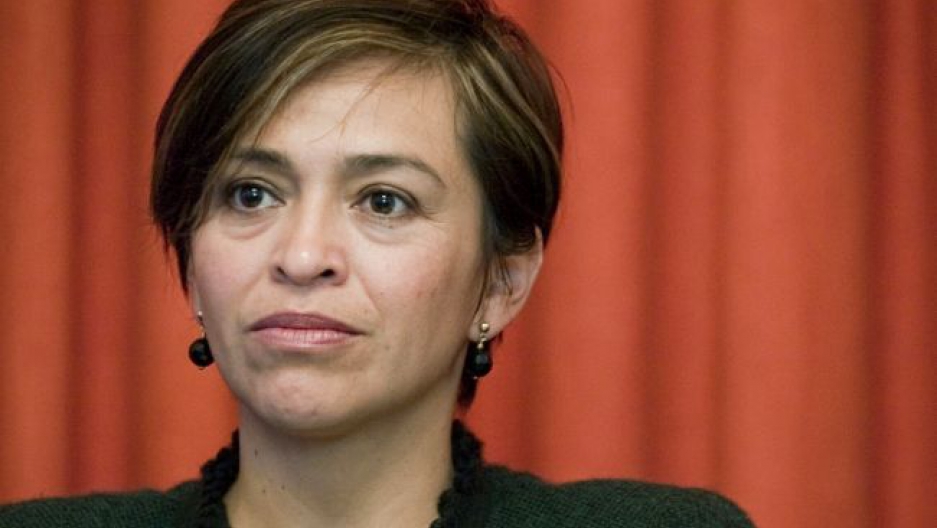 MEXICO CITY — It is not easy for any reporter to cover drug trafficking in Mexico, a country where more than 80 journalists have been shot, stabbed, bludgeoned to death or decapitated since 2006.

But despite the risks, journalist and author Anabel Hernandez not only covers the issue, but also levels accusations of narco corruption in the country’s most powerful institution: the presidency.

In articles and books, she has alleged links between kingpins such as Joaquin “Chapo” Guzman and a series of Mexican presidents, including Vicente Fox, who ruled from 2000 to 2006, and Felipe Calderon, in power from 2006 to 2012.

According to Hernandez, these leaders’ war on drugs was a farce in which they used soldiers and police to help out Guzman’s Sinaloa cartel.

And despite Guzman’s dramatic arrest in February by Mexican marines, Hernandez suspects the Sinaloa Cartel is only growing in power under current President Enrique Peña Nieto.

These accusations have major implications for Mexico, where more than 70,000 have died in cartel-related violence since 2006. But they also impact the United States, which has supported Mexico’s fight against drug gangs with billions of dollars, while the US Drug Enforcement Administration and others have worked closely with the Mexican security forces under the command of these presidents.

Such controversial investigations have come at a high personal cost. Hernandez, a mother of two, has faced relentless threats and intimidation, including Kalashnikov-wielding thugs breaking into her home.

Hernandez has been particularly concerned about her country’s federal police, drawing alleged links between them and the drug cartels.

In contrast, Mexico City’s police have provided her with protection against gunmen who might want her dead.

But while sacrificing so much of her personal freedom, Hernandez has made a huge impact on coverage of drug trafficking. Her book “Los Señores del Narco,” translated into English as “Narcoland,” has sold more than 200,000 copies, making it one of Mexico’s best-selling nonfiction works in recent years.

While the former presidents and other officials have denied Hernandez’s accusations, they have not sued her over them. Hernandez says this is because they cannot disprove her assertions, or in many cases show where their mysterious wealth came from.

As she launched a new edition of her book this summer, GlobalPost spoke with Hernandez about her investigations and what drives her on.

GlobalPost: How did you make the journey to find yourself investigating drug cartels?

Hernandez: I really started investigative journalism after the death of my father. My father was kidnapped and murdered in December 2000. … It is difficult for me to say this, but my father was abducted, beaten, put in a car trunk, and tied up in such a way that he suffocated. The case was never solved. The authorities asked for money to continue the investigation, which we refused to pay. It is very frustrating. What are you as an individual going to do against a corrupt system? This issue of my father made me change my outlook on life. For me, investigative journalism was a refuge.

Are you sure corruption in Mexico reaches the highest levels and it's not just lower-ranking officials who work for drug cartels?

Since President Luis Echeverria (1970-1976) the links with drug trafficking have been at a presidential level. Corruption in Mexico is pyramidal and from the presidency it permeates other institutions. … The principal public officials and politicians that have been part of this system are still in power. They are deputies, senators, governors and others.

Chapo Guzman escaped from a Mexican prison in 2001. How can you be sure that then-President Fox was complicit in this?

The escape happened under his government, and it involved public officials that worked under his orders. There is no doubt … Fox started his administration with just $1,000 in the bank. His companies were all bankrupt. … Chapo Guzman escaped on Jan. 19, 2001. In February, Fox started to spend money, to buy property and remodel his ranch. Where did he get this money? It is completely inexplicable. … He has never been able to sue me because he cannot justify this wealth.

Do you believe that President Felipe Calderon would personally meet with drug traffickers?

I am convinced that this war on drug trafficking was never real. Its only intention was to protect the Sinaloa cartel and attack others.

What is current President Peña Nieto’s policy toward drug trafficking?

I believe that Enrique Peña Nieto is trying to make an old-style pact with drug traffickers. The issue is that he won’t be able to because organized crime is so pulverized and there are so many loose criminal cells that don’t take orders from anybody. What I can say is that the Sinaloa cartel is achieving under this administration what it didn’t achieve in its best years under Fox and Calderon.

What do you think about legalizing drugs to stop billions of dollars that fund corruption?

What do you hope to achieve with your investigations? What should Mexico do, put former presidents in prison?

What I have learned in nine years of investigation into drug trafficking is that a general, a public security secretary or a governor is more dangerous than Chapo Guzman himself. They are the ones that betray the country, that sell the state to organized crime and they should face exemplary punishments. … If there are no exemplary punishments against the Mexican political and business class who permit people like Chapo Guzman to exist, then nothing is going to change and we are just going to be repeating this story of death, sometimes with more violence, sometimes with less, but always with the Mexican state under control of drug traffickers. We have to break this cycle.