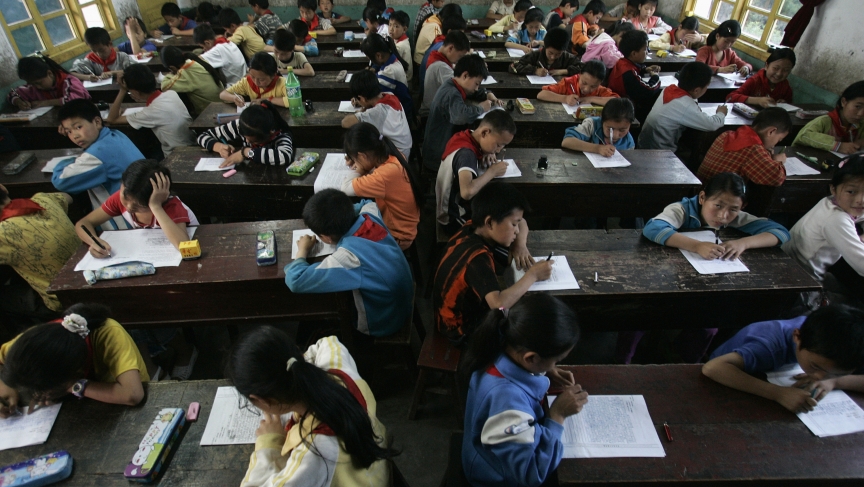 In China, the education system puts great emphasis on rote memorization. And Chinese students of all ages take lots and lots of exams.
Credit:

When elementary students from Barrowford elementary school in the English town of Nelson received end-of-year test results in the mail, they also got a letter from the principal. It reminded children not to get too hung up over the exams, because “these tests do not always assess all of what it is that make each of you special and unique."

“It did take us by surprise a little bit,” says Rachel Tomlinson, who wrote the letter along with another staff member. Tomlinson is the headmaster at the school and she spoke with PRI's The World on Wednesday. “It was one piece of paper and we expected 50 ten- and eleven-year-old children to read it. And now, people are tweeting us from Hong Kong.”

The letter said the teaching staff was “very proud” of all the sixth-grade students preparing to move on to middle school. And it went on to say, "The people who create these tests and score them do not know each of you — the way your teachers do, the way I hope to, and certainly not the way your families do.

Tomlinson says she's not entirely sure why the letter hit such a nerve with the public. “I can only assume that it's because it just does appeal to that need in all of us to feel very special,” she says.

The main ideas in the message to Barrowford students actually came from the blog of an American school teacher, Kimberley Hurd. In a post from October of last year, Hurd wrote, “The current testing culture personally drives me absolutely crazy. It does not tell students that they matter. It does not reflect their true genius."

Hurd continued with language that Barrowford mostly borrowed: "Tests do not always assess all of what it is that make each student special and unique. The people who create these tests and score them do not know each student the way I do, the way I hope to, and certainly not the way the families do. They do not know that some of my students speak two languages or more. They do not know that they can play a musical instrument or that they can dance or paint a picture. Doesn't that matter more?”

Tomlinson says she came across Hurd's post in November and thought, “Wow, that just really fits our philosophy. Because our philosophy here at our school is about educating the whole child.

“While math and English and those basic skills are very, very important, actually it's the whole child that's more important,” Tomlinson says. “The ability to apply those skills in different settings ... with confidence, to be determined, to overcome obstacles.”

“All of those things, as well, are as important as academic success,” she says.