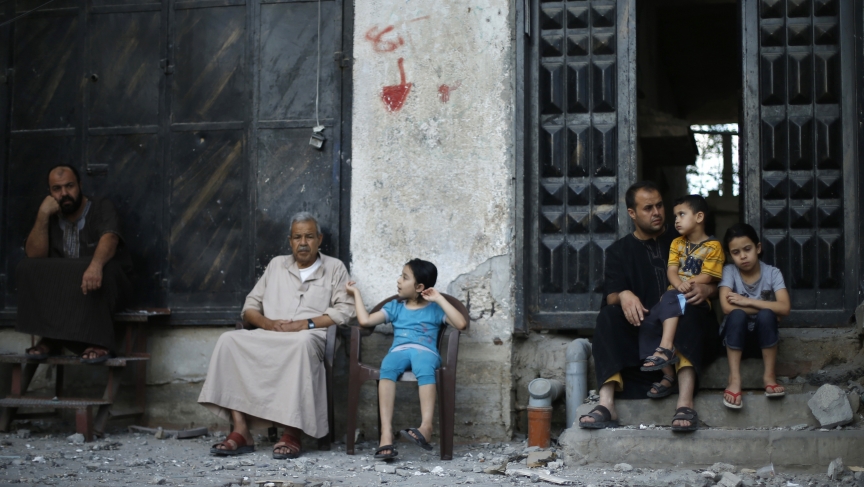 Palestinians sit outside their home across the street from the house of top Hamas political leader, Mahmoud Zahar. Zahar's home, police said, was targeted in an Israeli air strike in Gaza City.
Credit:

Given the scale of suffering, it's hard to appreciate just how small the Gaza Strip is. The arid sliver of land stretches about 32 miles long and between three and seven miles wide — that makes it about twice the size of Washington, DC.

The capital, Gaza City, is teeming with people and built low to the ground. It's dominated by a long stretch of beach that was, for many decades, a resort area for Arab rulers seeking an escape from the summer heat. That past as a holiday paradise seems long ago.

Now Gaza is defined by disputes rooted in a long, tangled history.

The 1948-1949 war that created Israel displaced about 700,000 Palestinians, according to Robert Blecher, the acting director of the Middle East and North Africa program at the International Crisis Group. That war concluded with the Gaza Strip under the control of Egypt, and the West Bank governed by Jordon.

In 1967, when Israel conquered both the Gaza Strip and the West Bank, the two territories were reunited again under Israeli occupation, Blecher says. At that point, there was relatively free movement for Palestinians between Gaza and the West Bank.

"That state of play lasted until the early 90s, when, as a result of the first Intifada, Israel started imposing restrictions on the movement of Palestinians between the West Bank and Gaza for security reasons," Blecher says. "In 2007, Hamas took over Gaza, sparking a formal split between Palestinian governance in Gaza and the West Bank."

And, Blecher says, "That is how it has remained ever since."

Leaving Gaza through the border with Egypt has been all but impossible for most Palestinians since the Egyptian military deposed the government of Mohammed Morsi about a year ago. The border crossing at Rafah opens approximately every 50 days so that Palestinians with extreme medical emergencies can seek outside help.

It all adds up to a state of deprivation that Blecher says he can't ignore — "to be in a war right now, where such enormous amounts of ordinance are being dropped on Gaza, people feeling like death is around the corner at any moment.

"To see that those people largely also support what Hamas is doing, support the firing of rockets, indiscriminate rockets into Israel, that could land anywhere on civilians and kill God knows how many people there," he says makes him think of "the amount of desperation that people feel, that they have no other choice, that they are not willing to go back to a situation where they're deprived of all the basic necessities of life, and that they are willing to cower in their kitchens as their houses are raked by gunfire from offshore navy boats — I just talked to somebody last night who was speaking to me from his kitchen as his building was being hit by gunfire — it's very difficult to connect to that sense of desperation."

He adds, "We hear so many stories from all around the world of people who are truly desperate that we all become inured to that. And I think, by virtue of my time there, I've developed a set of relationships, which has broken through my own sense of cynicism about this, and it's just made it very difficult for me to ignore."

Do you have more questions about Gaza? Join Rob Blecher in a Facebook chat: