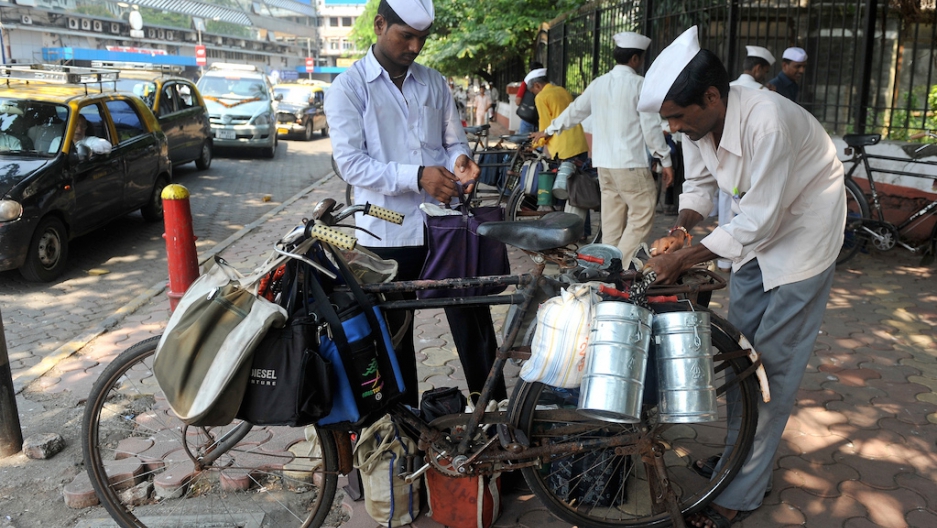 It's an everyday miracle: Dabbawalas deliver home-cooked lunches to workers all over the sprawling, crowded city of Mumbai. And they (almost) never get it wrong.
Credit: Indranil Mukherjee
Share

MUMBAI — In Lower Manhattan, a busy banker stuffs herself with overly rich restaurant fare ordered off Seemless.com. In Frankfurt, a manager slops generous portions of the canteen’s stew onto his lunch plate.

In Mumbai, an insurance analyst sits down to a healthy home-cooked meal, still warm from the stove where it was prepared by his wife or mother.

Remarkably, its age-old tradition of home-cooked meals — delivered on wheels — has resisted the momentum of change.

The dabbawalas, as they’re known, are the men who make it possible.

They have cemented their place in Mumbai’s colorful tapestry. They deliver lunch from home to the office or school every day, monsoon or shine.

“We take great pride in ensuring delivery even against great odds: We worked through the floods in 2005 and the terrorist attack on Mumbai in November 2008 when most of the city had come to a standstill,” said Vitthal Sawant, a 34-year-old dabbawala who has delivered lunches for more than 15 years.

The dabbawalas are a common sight in Mumbai: men clad in white kurtas, weaving their bikes through impossible traffic and swarming throngs, juggling multiple tiffins — circular silver tins with four to five compartments, each packed with food — that are destined for office buildings and school courtyards.

Transporting lunches may sound simple but what the dabbawalas do every day is a remarkable feat — one so impressive, in fact, that professors from Harvard Business School have traveled to India to study it.

Some 5,000 men dole out over 200,000 meals a day, picking up the tiffins in the morning from women, typically, who have packed steaming, spicy dishes into each compartment: a curry, vegetables, dal (lentils), and flatbread (with some variations).

For many Mumbai residents, this is the only way to lunch — on a feast, made with the love of a mother or wife.

"It's expensive to eat outside every day, besides it's not healthy,” said 36-year-old Naina Bhonsle in Mumbai’s Versova neighborhood. “I know what my husband likes eating, and so I prefer to send him a tiffin every day.”

The dabbawalas sort the various lunches according to where they came from, and where they are intended to go, labeling each tiffin with an alpha numeric code. The tins are then loaded onto city trains, transported through the city’s maze and handed off to local dabbawalas who complete the last leg of the route.

At lunchtime, the sharp aromas of turmeric, cumin and chili fill the office as workers deftly mop up their curries with bread. After the food is eaten and the tiffins packed back in their bags, the dabbawalas return the boxes to their respective homes, their loads a bit lighter.

“It’s hard work, no doubt about it,” said Pawan Agarwal, who heads an association called The Mumbai Dabbawala, noting that the crates of tiffins often weigh 100 lbs or more. “But they feel that serving food is serving God so they feel happy to do this business.”

Adding to the physical demands and challenge of precision, the large majority of the dabbawalas are semi-literate or illiterate, mostly hailing from small villages near the city of Pune in Maharashtra state. Their trade first started 125 years ago, in much simpler times. But as Mumbai has grown and transformed rapidly, adding new districts and train lines, the dabbawalas have adapted.

“Even though many of us are only semi-literate, we have learned to read the code,” said Vitthal Sawant. “We don’t have any need for computers — the code is imprinted in our minds.”

So deeply imprinted that the dabbawalas rarely, if ever, make a mistake. Their delivery system has been awarded a six sigma level of efficiency. That means they make around one mistake in every six million deliveries.

“A hundred things can go wrong along the way — tiffins delivered to the wrong destination, tiffins lost, tiffins broken — but they rarely do,” said Sawant. “Our motto is ‘error is horror.’”

Their delivery system has garnered international fame as a highly specialized trade, attracting Prince Charles and Richard Branson and warranting a case-study at Harvard Business School, visits from global delivery giant FedEx, and a series of documentaries.

The dabbawalas' lore even spawned a critically-acclaimed movie last year. In "The Lunchbox," a mistaken dabbawala delivery sparks an unlikely romance between a young housewife and an office worker nearing retirement.

“My dabba went to someone else, someone else liked it and finished it,” the astonished housewife tells her neighbor as the mistake dawns on her.

“But they never deliver it wrong, that’s impossible!” goes the response.

Still, the dabbawalas are facing unprecedented hurdles in a rapidly changing Mumbai. The brand new Navi Mumbai Metro, a much-anticipated rapid transit system, went online in early June, but the dabbawalas will not be allowed to use the new infrastructure.

But with only 12 stations covering around 7 kilometers of the city right now, the metro has little use at the moment for the dabbawalas, and its wagons are too small, says Gangaram Talekar, general secretary of the Mumbai Tiffin Box Suppliers Association.

“It will not be possible to carry hundreds of tiffins into those compartments, I imagine it will be a huge inconvenience to other passengers as well,” said Talekar. “Of course, we too would like to travel in greater comfort but we are not going to appeal this decision right now because for the moment, it’s impractical.”

The biggest challenges, says Pawan Agarwal, are cultural ones, like changing family roles. As women shed their aprons and head to their own workplaces, nobody is left behind to cook lunch at home. His solution is to have the dabbawalas’ wives take over the cooking, closing the catering circle.

“The customers will take cooked food also if husband and wife are working,” he said.

Others have lamented the growing taste for Western standards, for business lunches and quick fast food fixes. Yet the dabbawalas say nothing, not even McDonald's, has managed to put a dent in their business.

“Many people in this city prefer their lunch fresh, prepared lovingly by their wives or mothers,” said Vitthal Sawant. “This is why despite so many restaurants cropping up all over the city, our business still sees a 5-10 percent growth each year.”

What’s more, the dabbawalas are part of the city’s identity, says Agarwal.

“Mumbai is recognized, identified by the dabbawalas — all over India, all over the world they feel proud,” he said. “They are learning from this business, the values, the culture.”