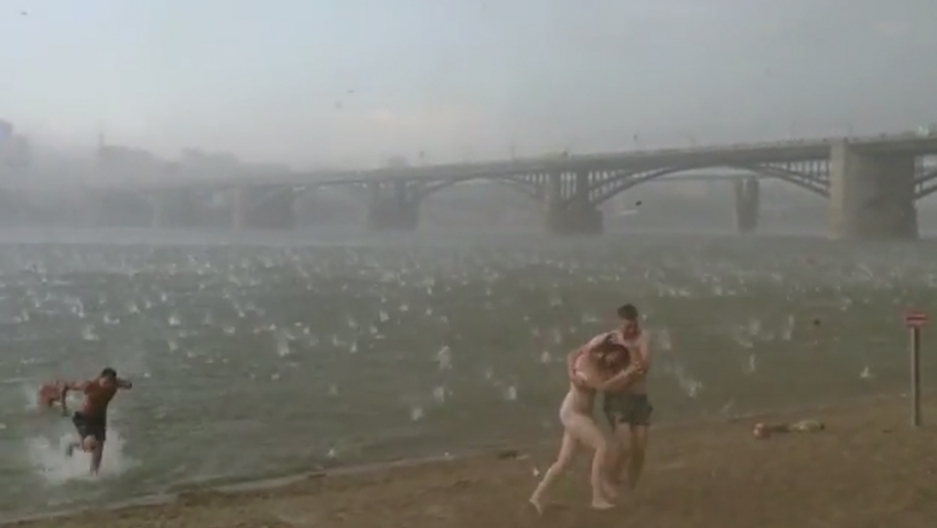 An idyllic day at the beach turned crazy for swimmers in Siberia who were pummeled by golf ball-sized hail during a freak storm.

The apocolyptic scene was captured on video along a river in Novosibirsk on Saturday.

Temperatures reached 99 degrees in Siberia's largest city over the weekend, driving residents to any source of water they could find.

But on Saturday, high winds suddenly hit along the Ob River and, the next thing you know, it's literally raining huge pellets of ice.

While Siberia is known around the world for its snow and ice, hail storms are rare here in the summer. Stunned swimmers can be seen running with their hands over their heads, taking shelter under umbrellas and anything else they could find.

At one point, a woman is even heard screaming, "If we die, I love you!"

A bit much? Maybe. But if you looked out and saw this, what would you think?

Grassy areas were covered in white following the storm, which lasted only a few minutes. No one was seriously injured at the beach, although two young children were killed when a tree fell on their tent while taking shelter from the storm with their parents in nearby Bredsk.