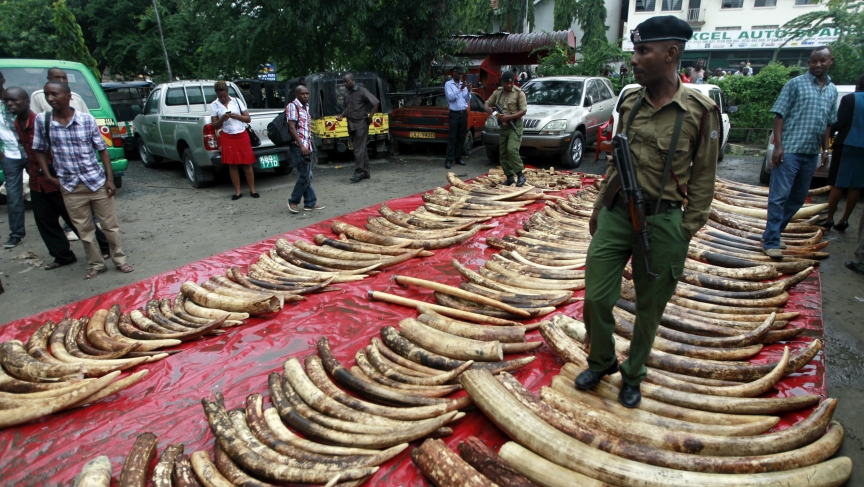 A policeman stands on seized elephant tusks at Makupa police station in Mombasa June 5, 2014. Kenyan authorities seized 228 whole elephant tusks and 74 others in pieces as they were being packed for export in the port city of Mombasa, police and wildlife officials said.
Credit:

One of the biggest obstacles to deterring poaching is a lack of reliable information. Now there's a new website aiming to help.

A conservation group called the Elephant Action League has created WildLeaks — a WikiLeaks-style site for the anti-poaching crowd. It's billed as the first secure online platform that allows whistleblowers and the public to post anonymous information about illegal poaching.

Wildlife crime is a huge, global enterprise — one of the largest illegal markets in the world after drugs, weapons and human trafficking. At the same time, it is one of the most lightly punished crimes, according Andrea Crosta, the executive director of the Elephant Action League.

“It’s a very low-risk, dirty business,” Crosta says. “If they get you with a load of drugs — cocaine or heroin— in most countries you go to jail for a long time. In some countries, you get executed. If they find you with a rhino horn, which can fetch up to $250,000 ... you get a slap on the wrist.”

Crosta has been involved with conservation issues for more than 20 years, but he has also been a security consultant for law enforcement. He says he realized that many people had good information about wildlife crime — they just don't know what to do with it. He created WildLeaks to fill the gap between those people and others who have the tools to cut down on poaching.

Crosta says the goal of the site is "to facilitate the identification, arrest and prosecution of anybody — criminals, traffickers, businessmen, corrupt government officials — behind wildlife crime." In addition to the information, he says the group is building ties with law enforcement agencies to make sure poachers end up in jail.

And, like its inspiration, WildLeaks also wants to use another tactic: public shaming. Crosta hopes the information the site collects will end up making news and outing poachers in the media.

In addition to its secure online platform, WildLeaks has teams in the field so people can contact the group personally. “In this way,” Crosta says, “you slowly build a relationship with potential whistleblowers, potential sources, in the hope that they will provide critical information which we can act on.”

With billions of dollars at stake, WildLeaks has already been targeted by criminals unhappy with their work. Crosta is unfazed.

“First of all, we’re not the only ones who fight this battle; we are many," he says. "We take a lot of precautions to protect our data ... We don’t have permanent personnel in target countries like Africa or Asia, because the moment you have people there, they become a liability."

Though the group is just four-months-old, they have already received “dozens and dozens of tips and leaks and different kinds of information,” Crosta says. “All in all we came up with 24 leaks that [we] assessed as good and reliable. We are about to investigate three of them already.”

“We are very happy with the reaction of the public,” he says. “It looks like we kind of fill a gap.”