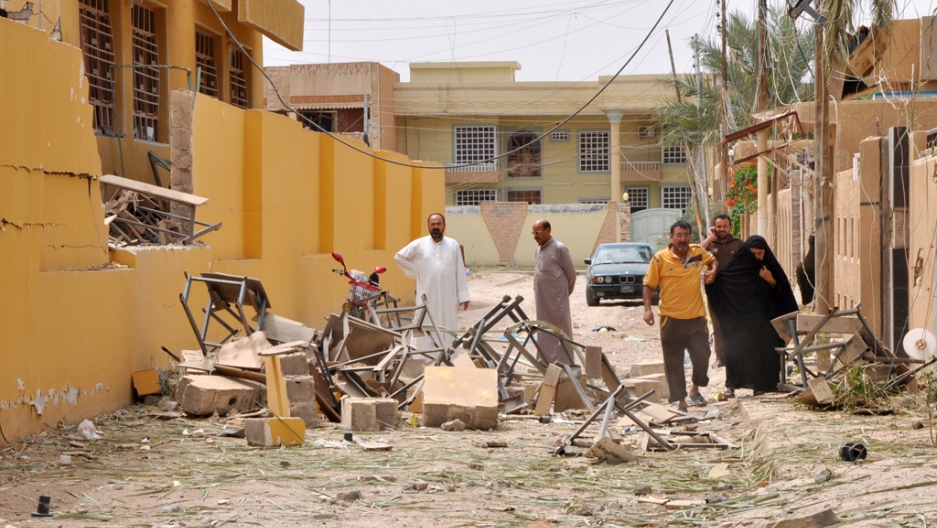 BEIRUT, Lebanon — As the Iraqi government struggles to contain a Sunni militant advance on Baghdad and hold the country together, more and more Iraqis are blaming Prime Minister Nouri al Maliki for their country’s increasing resemblance to neighboring Syria.

Maliki isn't just responsible for the Iraqi army's poor showing against the Islamic State, critics say: Like Syria’s Bashar al-Assad, he’s responsible for the violence itself, for having ordered a military crackdown on a public demonstration, triggering the recent wave of unrest. And now, he’s relying on a military strategy that guarantees high civilian casualties.

In January of this year, Iraqi Prime Minister Nouri al Maliki dispatched his military to quell a protest in Ramadi, triggering a months-long bloody confrontation where Sunni militants, including the Islamic State under its earlier name of ISIL, took control of parts of Falluja and Ramadi while the Iraqi military heavily shelled what it said were militant targets. The violence killed hundreds and displaced more than a hundred thousand.

The Ramadi protest was the product of a nearly year-long, largely peaceful Sunni demonstration against the Iraqi government's perceived preferential treatment of the country's Shia. Maliki's heavy-handed response alienated Sunni populations further, deepended the country's sectarian fault lines, and set the stage for the Islamic State to make an unprecedented sweep across the country’s north just five months later, joining Iraq territories to conquered regions in Syria and plunging Iraq into one of the country’s worst security and political crises since the US-led invasion in 2003.

"Maliki was using aircraft against normal civilian people. He bombarded the entire city," says a man from Fallujah who asked to be called Ali. He said the indiscriminate, sustained violence eventually forced him and his family to flee to the relative safety of Iraq's Kurdistan region. But he said after watching the news from Syria unfold over the last three years, he wasn't surprised by Maliki's response.

"All dictators, they all do the same things," he said referring to Maliki and Syrian President Bashar al Assad.

"The Assad approach" is how Maliki's detractors, both rival politicians in Baghdad and civilians caught up in the government's fight against Sunni militants, describe the Iraqi leader’s military strategy, comparing the men’s use of military force to address internal social and political problems. In Syria, Assad's use of military force in response to popular protests, some argue, was partially to blame for how the originally peaceful protests morphed into an armed uprising that eventually created a security vacuum in which Al Qaeda-inspired militants flourished. Some Iraqis say the same is true of Maliki’s decision to clear the Ramadi protest.

Some Syrians say so, too. "Sometimes I laugh when I see this Iraqi dictator following Assad's footsteps," said Omar Abu Leila, a spokesman for the Free Syrian Army's Eastern Front.

To Leila, there is a second similarity: deploying the air force to face an insurgent threat.

After Sunni militants led by the Islamic State seized Mosul and Tikrit last month, Maliki dug in, rejecting the possibility of political concessions and using his military in an attempt to claw back lost territory. In Tikrit, ground troops have so far been unable to advance further than the city's outskirts. In Mosul, Iraq's second largest city, government airstrikes have become a common occurrence. Residents there report the strikes have hit residential areas, destroying homes and killing civilians.

Leila says Maliki is following the Assad playbook in his uncompromising stance and heavy reliance on aerial bombardment — a strategy which increases the potential for civilian casualties — to respond to an insurgent threat.

But military analysts suggest the similarities are more a function of available resources rather than a coordinated game plan — particularly in the case of Iraq, where the army has proven unequal to the task at hand.

"Both [Assad and Maliki] are using whatever assets they have," explains Yezid Sayigh a senior associate at the Carnegie Middle East Center.

"The air force is something [Maliki’'s] got," said Sayigh. "His ground forces were crumbling and now his air force is holding the line." Sayigh says Maliki isn't using ground troops as much because it’s not an option, his regular army is fragmented, fractured and unreliable.

Unlike in Syria, where the Assad family built the Syrian military over 40 years into a ultra-loyal fighting force, the military Maliki inherited had been gutted by de-Baathification following the US-led invasion in 2003. The military eventually rebuilt by the US was designed to be nationalist first rather than loyal to one particular leader.

While Assad did weather some desertions in the early days of the Syrian uprising, it was nothing on the scale of Iraq's mass defections in the face of last month's unprecedented Sunni militant advance. In Iraq, two whole divisions of troops and the military's entire northern command were effectively dissolved within days, setbacks the army is still struggling to recover from.

Joshua Landis, a Syria scholar and director of the Center for Middle East Studies at the University of Oklahoma, says he sees evidence that Maliki is beginning to create a loyal, sectarian fighting force out of what remains of his military. "He's copying the Assad model because its the only one in the region that works."

But the temporary stopgap measures aren’t as effective in Iraq as they have been in Syria. In Syria, Shia militias from Lebanon and Iraq, have been one of the most important factors keeping Assad in power. But former Iraqi military commanders say they lack the discipline and training to fully shore up the country's armed forces.

"These guys are not Hezbollah," concedes a former pilot in the Iraqi air force, referring to the highly trained Lebanese militant group that is aiding the Syrian military and in many places leading operations against rebel forces in Syria. "They just don't have that level of training," he said.

Regardless of the medium-term effectiveness of Assad’s military playbook, the similarities, analysts say, don’t bode well for the future. While Assad, partially through sheer military might, has managed to outlast even the rosiest initial predictions of his longevity, Sayigh warns his response to the Syrian uprising and ensuing insurgent threat is far from a winning strategy.

"[Assad has] been effective in that he's in a better position now than the opposition, but he's done so at a heavy cost to the county and to himself." Sayigh explains in addition to the death toll from the crisis that is now upwards of 170,000 according to monitoring group reports, Syria has lost massive sources of revenue, expensive infrastructure has been damaged or destroyed and Assad’s once firm grip on centralized power is now weakened and fragmented.

"So that even if the regime wins,” Sayig said, “it won’t be able to call itself master in its own house."