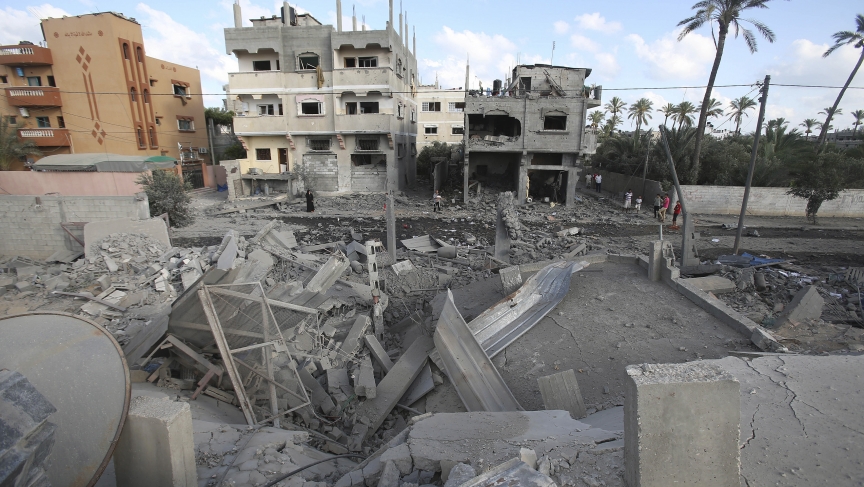 Palestinians look at the rubble of a house which police said was destroyed in an Israeli air strike in Deir El-Balah in the central Gaza Strip July 14, 2014.
Credit:

Gaza is a densely populated area — almost two million people live in just 139 square miles. That means, on normal days, the streets are packed with people going about their daily lives.

"The streets are empty," says William Booth, the Jerusalem bureau chief for the Washington Post. He's been reporting from Gaza, where people are in fear of the constant air strikes raining raining down from Israeli warplanes.

Booth says Gaza feels very different today than during his past trips there. For one, there is the soundtrack of loud booms and explosions, with vapor trails overhead from rockets and planes. For the Palestinians who have stayed in their homes, bombings have become a kind of background noise.

“You’re doing an interview and you hear this big kaboom and you flinch and maybe the fellow from Gaza you’re interviewing flinches or doesn’t flinch," Booth says. Sometimes the conversation simply moves on without a hitch.

"You continue with the conversation unless it’s very close," he explains, and then "people will turn and run or try and figure out what hit where and if it was a friend or a relative that was there."

Among the tall buildings, Booth says, the small gardens where Gazans grow watermelon and other fruits have been repurposed. It's in those watermelon patches where many of the rocket launchers used by Hamas and Islamic Jihad are placed.
Booth spoke to one family shortly after their house was bombed. One member of the family handed him a plastic bag containing a finger. Booth says when bombings occur and there are fatalities, people try to hunt for the bodies on their own.

“Sometimes the bodies are whole and complete and they can be put in an ambulance and taken away," he says. "But sometimes the strikes are very lethal and the bodies are not all in one piece, and so people gather the parts as best as they can to include in the burial."

Groups of people in the more urban northern part of Gaza, where Gaza City is located, have now fled to the south so they can take shelter in refugee camps set up by the United Nations.

Speaking to Palestinians in Gaza, Booth says they have mixed feelings. There's anger towards the Israelis, but also at Hamas.

But then there's hope that this round of fighting will end soon. Although that, Booth says, seems far away at this point.