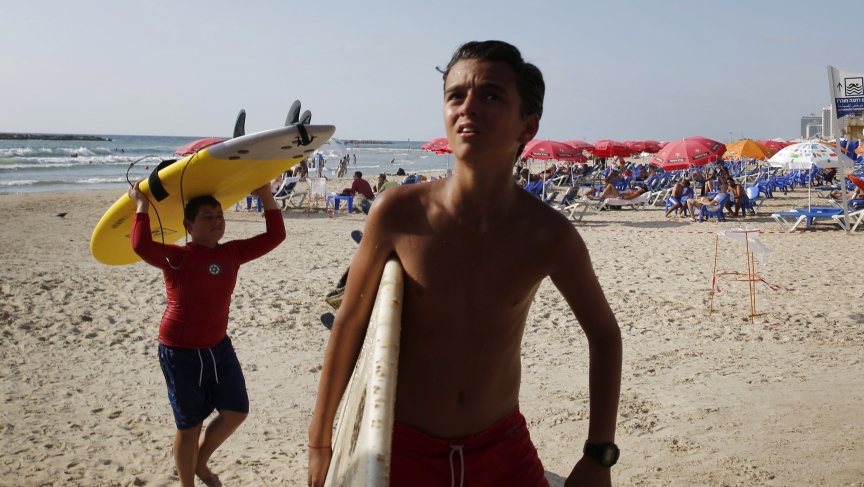 Boys carry their surfboards ashore on a Tel Aviv beach after their lesson was cancelled following a rocket from Gaza that was intercepted by Israel's Iron Dome defense system.
Credit:

It’s almost midnight in central Tel Aviv and a dozen or so young Israelis are lounging in folding chairs on the street patio of a small bistro.

It’s a world away from the devastation in the Gaza Strip ... or even Israel’s southern communities, where sirens ring regularly and residents are accustomed to taking shelter.

“This is the bubble,” said Moti Avraham, who works at the bar. “People here want to live. The restaurant is busy, the bar is busy. We are not afraid."

In the last decade, Tel Aviv has been spared from the rockets and sirens that are relatively common for Israelis in the south and the north. It also escaped the worst violence of the second intifada last decade.

But Hamas’s upgraded arsenal has brought the conflict to Tel Aviv's front door.

Sirens wail with some regularity these days, urging Tel Aviv to take shelter from incoming rockets. For the first time, rockets fired from the Gaza Strip are reaching even farther north than this coastal city.

But still, for most part, people here seem unfazed.

The beach is busy for a Thursday afternoon. Talma Liberman plays in the water with her 6-year old son.

“I choose not to operate from fear,” she said. “But rather from a feeling of safety. A feeling that there is something that protects us and nothing will harm us.”

This choice to ignore danger comes easily here, in part because of Israel’s Iron Dome system, intercepting rockets mid-air. With faith in this system, many people saunter rather than run toward shelters.

And some, like 26-year-old Luna Frankel, don’t seek shelter at all.

“The Iron Dome shoots down the rockets,” she said matter of factly. “I’m more likely to die in a car accident now than from a rocket.”

Israel first installed its defense system to protect the southern region in 2011. The system has since been extended north, and has intercepted at least 70 rockets bound for urban centers in recent days. There have been no Israeli casualties.

So far in this latest escalation, Israel’s strategy has been airborne. While the Iron Dome intercepts incoming rockets, Israel’s air force has been pounding the Gaza Strip, killing around 100 Gazans, according to Palestinian health officials.

Israeli Prime Minister Benjamin Netanyahu has indicated the possibility of a ground invasion. He’s called up thousands of reserve soldiers and amassed tanks and artillery on the edge of the blockaded Gaza Strip.

But on a recent night this week in Tel Aviv, patrons at a café were watching the World Cup, not the news.

“I think they’ve (Hamas) been warned quite a few times to stop sending missiles to Israel, and they haven’t done it,” said Nir Avrahami.

Avrahami is supportive of the air strikes he believes are targeting Hamas. But his support stops short of risking Israeli lives in a ground offensive.

“Once you go on the ground,” he sais, “you’re going to start losing soldiers. And if we lose even 150 soldiers, this country is going to be crying.”

For most in Tel Aviv, air strikes in Gaza and the Iron Dome above are enough to defend the country, and there is less support for escalation to full blown war. Even as the government considers a ground offensive, in Tel Aviv there is a sense of insulation.