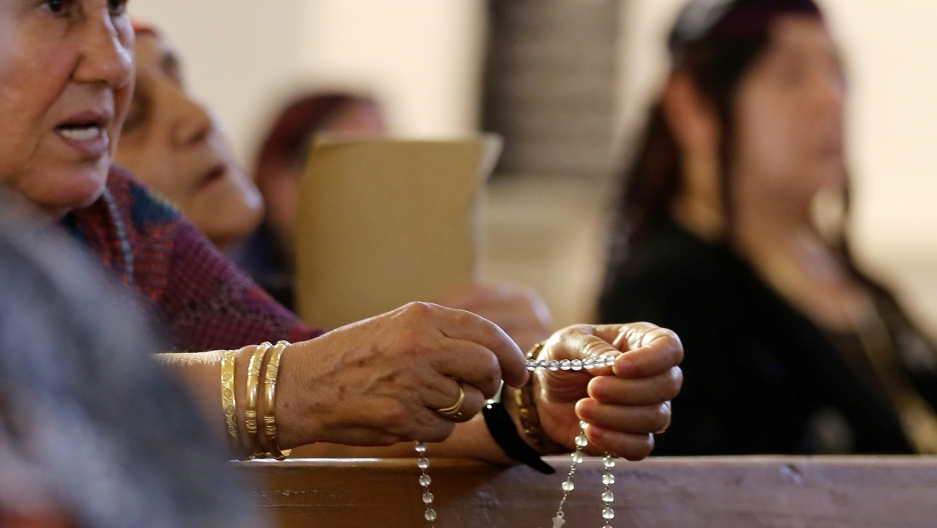 Iraqi Christians fleeing the violence in the towns of Qaraqush and Bartala, both east of the city of Mosul in the northern province of Nineveh, pray at the Saint George church on July 1, 2014.
Credit: Karim Sahib
Share

QARAQOSH, Iraq — Until last month, Sister Miskintah and Sister Utoor Joseph ran an orphanage in Mosul. Then, on June 10, Sunni militants from the Islamic State (IS) attacked and seized the city.

The sisters fled, taking the children with them, as they had heard numerous accounts of kidnapping and even murders of Christians in Syria at the hands of IS. But from the safety of the Kurdish city of Zakho they heard a different story from Christians who remained in Mosul. Assured IS had not harmed any Christians, they decided to return to collect supplies for the children. They took with them two of the older girls and a 12-year-old boy.

That was a week ago. No one has heard from them since. Christian leaders believe they have been kidnapped by IS, also known as ISIL or ISIS.

“We still don’t have any information about where they are,” said Father Yousif Thomas Mirkis, Archbishop of Kirkuk, a city standing on the edge of the IS frontline. “We hope we can negotiate with the kidnappers, but I think they don’t need money. They took all the wealth of Mosul so what can we give them that they want?”

Muslim extremists have targeted Christians with increasing frequency since the fall of Saddam Hussein in 2003. Churches and homes have been bombed. Families have been threatened and bullied. Individuals have been kidnapped and murdered or held for ransom. But to Iraq’s dwindling Christian population, this new Islamic force represents a threat of a different scale.

“This is the biggest threat ever," said Canon Andrew White, Vicar of St. George's Church in Baghdad. “There has never been anything like this. We’ve had our problems in the past but not like this. This is a major threat to the future of Christianity here.”

Unfounded rumors, along with limited communications, has made the true situation of Christian families living under IS difficult to gauge. Around 1,000 families were living in Mosul when IS arrived. Just how many are left there is unknown.

Allegations of rape and kidnappings of Christians in the city of Mosul have been spread and shared on social media, state media and Christian websites. So far, the disappearance of the nuns and their orphans is the only report confirmed by local church leaders, though many families have received threatening phone calls, some even from acquaintances.

But the presence of new challenges for the Christian community is not in doubt. White said that Mosul’s Christian families have now been asked to pay a tax of $250 per person per month. This tax is known as the jizya and is sometimes forced on non-believers living under Islamic rule. Families living in the nearby Christian city of Qaraqosh say while the introduction of the tax has been announced, they do not think it is being enforced yet.

In Mosul, resources are scarce, prices are rising, jobs have been lost and government employees’ salaries slashed, meaning the payment of such a tax could prove an impossible burden on Christian families. But even harder to swallow for a people with such a rich and distinguished history in Iraq are the limits currently being imposed on practicing their faith.

“One of the things that really upset me was when I heard, for the first Sunday in 1,600 years, there was no church service in Nineveh,” said Canon White. “That was deeply saddening.”

Although Christian churches have not suffered the level of destruction visited upon Shia mosques, they have, according to Hakmet Saed, a Christian father who fled with his family to the Kurdish city of Sulamanieyah, seen their crosses replaced with IS flags.

An Armenian Church under construction was bombed in Mosul, while elsewehere in the city some statues, including a renowned sculpture of the Virgin Mary on the Chaldean Church, have been destroyed.

“This is the destruction of buildings,” said Archbishop Mirkis. “But it is killing people that we are more afraid of. Human life is more important than all the buildings.”

Last week, IS forces made a push to take the Christian city of Qaraqosh on the outskirts of Mosul. Many families received threats and warnings by phone.

“Rumors spread of rape, murder, and looting. Panic set in,” said Sabah Raffo, a board member of the Local Guards — a Christian security force that protect the city of Qaraqosh. “The city was empty within three hours. People ran leaving everything behind.”

While most Qaraqosh residents have now begun returning to their homes, Christians throughout the country are making plans to emigrate.

Mirkis said he feared this new threat could leave Iraq “empty of its Christians.”

“The Christian community is very very afraid,” he said. “Many will leave. Many have already fled to Kurdish areas. The future is a very big question mark.”

Canon White said the Christians in Baghdad were afraid and uncertain but determined.

“In Baghdad, we know terrible things are happening but we are staying committed to our faith. Nothing will move us from here. If they come for us, they can take us, but we’re not going anywhere.”