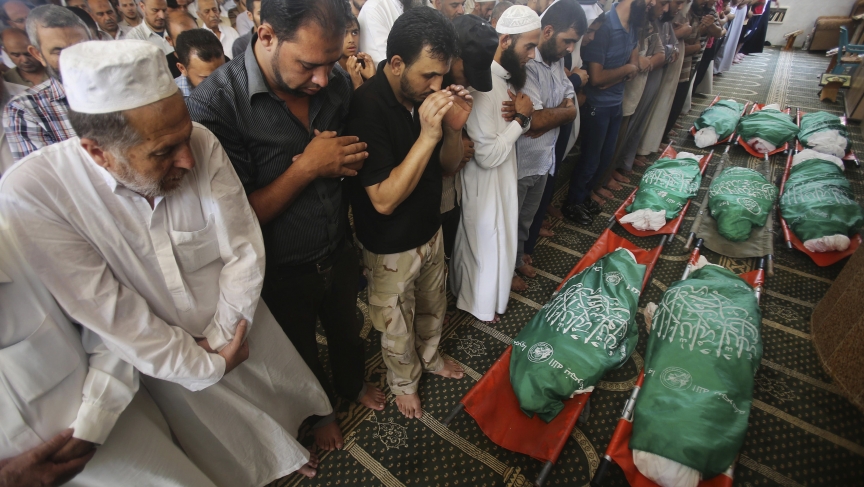 People pray next to the bodies of eight Palestinian members from the al-Haj family from Khan Younis in the southern Gaza Strip. Palestinian medics said the relatives were killed in an early morning air strike carried out by Israel that destroyed at least two homes.
Credit:

When Hamas fighters launch rockets, Israel can respond with F-16s; when they fire Kalashnikov rifles, they might be faced with state-of-the-art tanks. Militarily, that's a no-win situation — and Hamas, the Islamic movement that runs the Gaza Strip, knows it.

But Hamas is not seeking a traditional military victory, and experts say its chances of success are high.

Hamas emerged in the 1980s as a Palestinian off-shoot of the Muslim Brotherhood from Egypt. The movement vowed to follow the path of “active resistance” — taking up weapons — against the Israeli occupation of Palestine. The name "Hamas" is actually an acronym of the Arabic phrase "Harakat al-Muqawama al-Islamiyya," which means “The Islamic Resistance Movement.” But Palestinians have recently taken jabs at Hamas for being none of those three things.

“It wasn't doing anything very Islamic, it wasn't doing any resistance, and it wasn't really much of a movement,” says Nathan Brown, an international affairs professorat George Washington University. In the eyes of the people criticizing Hamas, the movement was too busy trying to govern in Gaza.

Hamas seized control of the Gaza Strip, home to 1.7 million Palestinians, in a bloody coup back in 2007. Since 2009, the movement of people and goods in and out of Gaza has been put under tight restrictions by Israel and Egypt. That's made life difficult for Gazans, but many Palestinians think the Hamas leadership had to take at least some of the blame for the situation.

Now, Hamas leaders want to resurrect their reputation by getting back to their organization's roots. “What they seem to have been doing over the last few months is to try and recover their identity as a resistance movement,” says Brown.

But today, Hamas does not pose an existential threat to Israel militarily — if ever it did. The group's exiled leader, Khaled Meshaal, even says so himself. "We know that the Zionist enemies are stronger than us,” Meshaal said from Doha, Qatar, on Wednesday. But, he went on to say, “our people will never surrender.”

It is not known for sure whether Hamas ordered the kidnapping of the three Israeli teenagers whose deaths in late June preceded this latest round of violence. Hamas also appears divided internally about what direction it should be taking, Brown says.

“It's not clear to me that Hamas is following any kind of clear strategy right now,” Brown is quick to add. "But if there is any impulse that's guiding the movement right now, it seems to be a bid to show its relevance to Israel and that it can inflict pain.”

Even before a single Israeli citizen was injured, Hamas had successfully sent the message that its rockets could reach the major urban centers around Tel Aviv and Jerusalem.

“'We can make your lives miserable. You may be able to hurt us, but we can hurt you too,'” is the essence of the message Hamas wants to send to Israel, says Brown.

Ofer Zalzberg, a Jerusalem-based analyst with International Crisis Group, thinks Hamas is might also be choosing to escalate hostilities with Israel in order to win ceasefire terms that would loosen the blockade imposed by Israel and Egypt. “It's not aimed at re-instating Hamas as a government in Gaza, this is not their preferred option,” he says.

“Hamas is trying to convince Israel that it cannot enforce the blockade in such a total manner, because it's costly,” Zalzberg says.

There are certainly risks for Hamas. Its military commanders are being targeted by Israeli air strikes. Its weapons stockpiles could be depleted by being fired off or bombed by Israel. And if Hamas rockets end up killing Israeli civilians, the Israel Defense Forces could be ordered to re-invade Gaza with the intention of delivering a fatal blow to Hamas as a military organization.

“Hamas is banking, so far rightly, on the fact that [any large-scale ground incursion] would be very costly for Israel as well,” says Zalzberg. But at this point, Hamas appears to willing to take those risks by fighting for some kind of ceasefire arrangement with Israel that would prove it is here to stay.