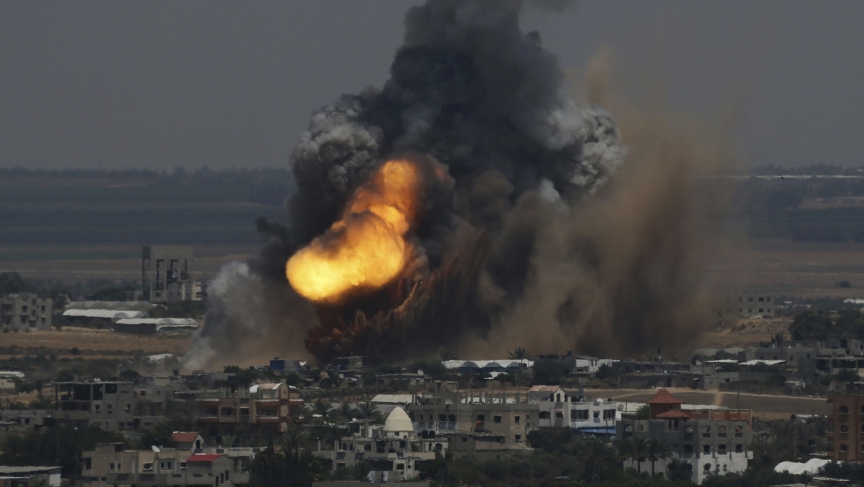 Smoke and flames are seen following what police said was an Israeli air strike in Rafah in the southern Gaza Strip July 8, 2014.
Credit:

Imagine being on your balcony and watching bombs falling all around you. That's what Amjad Shawa, who lives in Gaza City with his wife and four children, has been seeing over the past three days.

Just today, Shawa says, there were 10 to 15 air strikes within 30 minutes. He finds it very difficult to explain what is happening to the children — it's just too complicated to explain to a four-year-old. "Every [time] we have an air strike, the children are very scared," he says. "They scream and come to me and their mother."

Shawa believes the Israeli air strikes are targeting civilians. “Today about four, five families were killed — fathers, mothers and children were killed," he says. "It’s a catastrophe.” From the balcony, he can see ambulances rushing to the bomb sites to help.

While the Israeli army says that it sends warning messages about imminent air strikes, Shawa says he personally hasn't received any. Neither Israelis nor Palestinians get much warning to escape attacks. Even if he had, he thinks they wouldn't be effective.

“We have big families here in Gaza," he explains. "Fifty, sometimes 60 people live in one house and giving them a few minutes to leave is not enough." To add to that, Shawa says, Gaza is an over-populated city that's very difficult to escape during airstrikes.

For the time being, he doesn't see how the differences between the Israeli and Palestinians might be resolved. He has seen moments like this many times before, and they just keep repeating. "There's a war. Things get destroyed. We rebuild and then it gets destroyed again," he says.

For Shawa, that's what life in Gaza feels like.