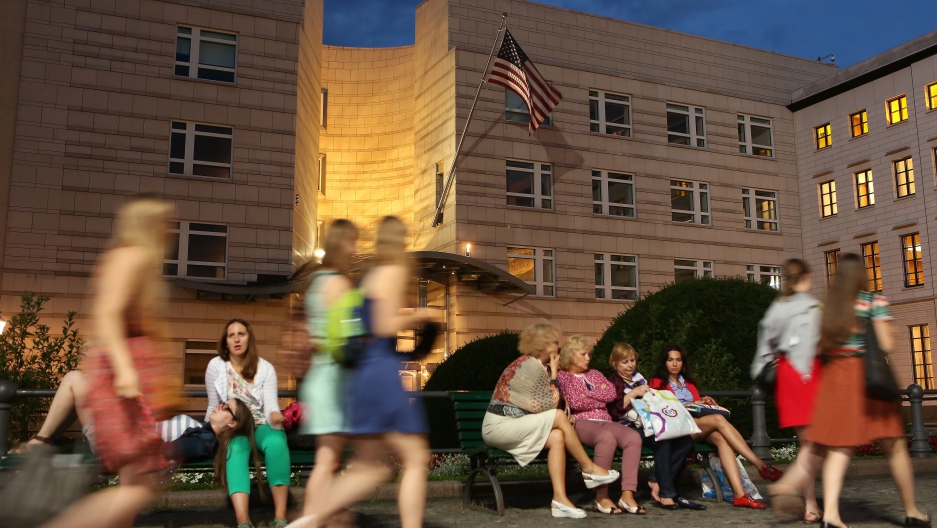 The US embassy in Berlin. The arrest of a German on suspicion of working as a double agent for the NSA hay help erode public trust in Washington especially among the young.
Credit: Adam Berry
Share

BERLIN, Germany — Although allegations that the CIA actively worked to recruit a double agent in Germany's top spy agency is prompting renewed outrage from German officials on Tuesday, experts say the government has little scope for much more than issuing strong words.

“There will be a lot of castigation but the two governments will continue to cooperate on the wide range of issues where their interests overlap,” says James Davis of the University of St. Gallen.

Still, the latest espionage scandal to hit relations between the two countries is strengthening calls for Germany to offer support, possibly even asylum, to NSA whistleblower Edward Snowden, and prompting new demands for the government to launch its own espionage program directed against the US.

However, the largest casualty may be a major EU-US free trade agreement that’s enjoyed the support of Chancellor Angela Merkel.

“That the Chancellor will have to be seen as representing the interests of a sovereign country seems clear, both from a foreign policy and domestic politics perspective,” Davis says of the Transatlantic Trade and Investment Partnership (TTIP).

“[Therefore] the episode will strengthen the hand of those who are against TTIP.”

When not stoking new anger against the US, the case has fascinated German observers because of the curious way it’s unfolded.

Unnamed US officials confirmed Monday that the CIA had indeed recruited an agent of Germany's foreign intelligence service, who was arrested by the German authorities last week on suspicion of being a double agent.

However, the authorities initially said they had detained the man in connection with an alleged offer to sell information to Russia. While in custody, he purportedly confessed to working with US agents as well, selling as many as 218 classified documents over a two-year period for a total of around $35,000, reports said.

His lawyer stopped short of confirming those details on Monday, but he told German television that “there are things in the media which are true.” Earlier reports by Der Spiegel and the Suddeutschezeitung suggested that the double agent had been tasked with gathering inside information about a German parliamentary committee's inquiry into the NSA's activities in Germany — including the tapping of the chancellor's mobile phone.

Alghough Merkel’s cellphone may have made the biggest headlines, ordinary Germans have been mainly concerned about Snowden's revelations about the NSA's massive data collection program. The latest revelations about US agents allegedly working to subvert the inquiry into that case adds a new layer of betrayal, says Jan Techau, director of Carnegie Europe.

“The goal was to spy on this [parliamentary investigative] committee and get secret documents on this committee's work,” he says. “This is what people have taken really hard.”

The public outrage has forced politicians to take stronger stances against the US, Techau adds. And while the new revelations may not result in any immediate consequences for US-German relations, he adds, growing popular disgust with Washington may have long-term implications.

Already, nearly two-thirds of Germans think their officials should act more independently from the US, according to a poll conducted by TNS Research for Der Spiegel. Some 69 percent said their confidence in America had fallen recently.

Visiting China with a trade delegation when the story broke, Merkel issued what some view as her strongest statement yet on the allegations of US spying, saying the case represents a “clear contradiction as to what I consider to be trusting cooperation between agencies and partners.”

President Joachim Gauck exploded on German TV, saying “enough is enough,” and Bild newspaper reported that Home Minister Thomas de Maiziere is pushing to step up spying on the US.

Although that actually taking place is unlikely, those comments and others like them reflect the growing pressure on policymakers from media and public opinion to take some kind of action, says Volker Perthes, director of the Institute for International and Security Affairs (SWP).

“Germany should and will probably improve its counter-intelligence activities, also with an eye on what our American allies are doing,” he says.

Intelligence cooperation between German intelligence agencies and their US counterparts could also be reduced, he adds. And German policymakers could add their voices to those in the European parliament calling for canceling the SWIFT agreement on exchanging banking data.

The growing public disenchantment with the US could have farther-reaching implications over the upcoming months and years.

Germany's orientation has increasingly tilted toward US foreign policy goals and economic ideals in recent years, illustrated by Merkel's toughening stance toward Russia. But growing skepticism about US intentions could slow or skew that tilt, especially if it begins to influence voters' attitudes toward American values.

Davis says the spying scandals are especially affecting the attitudes of younger Germans under 25.

“These revelations continue a long series of similar episodes that together leave the impression for many in Germany that the USA has lost its anchor.”