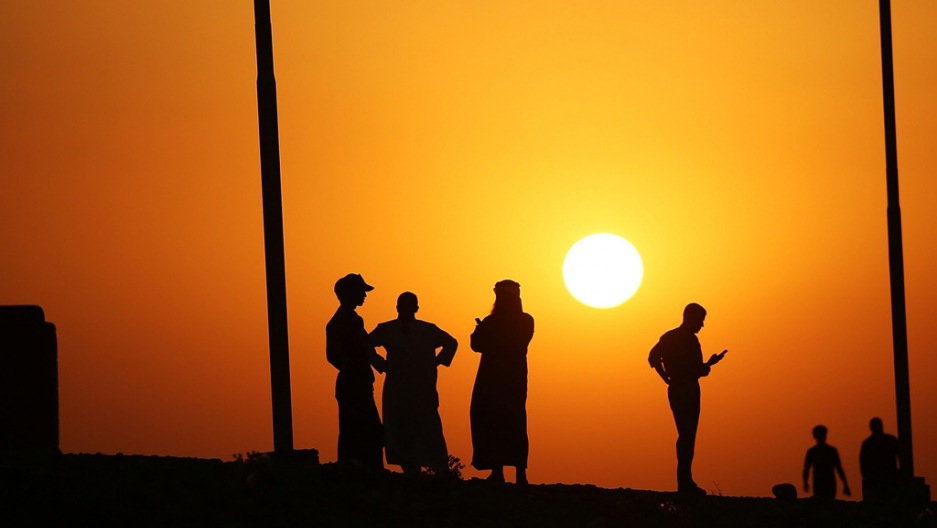 An internal displacement camp in Khazair, Iraq, houses many who hope to enter the relative safety of the nearby Kurdish region.
Credit: Spencer Platt
Share

The reaction internationally has not been so welcoming.

The US urged the Kurds to remain with the central government. Maliki was highly unimpressed, accusing them of “exploiting” Iraq's precarious position as government forces battle with the extremist militant group, the Islamic State of Iraq and the Levant (ISIL).

“This is rejected," he said in a press conference on the semi-autonomous region's push for independence.

The case for Kurdish independence

Sunni militants seized control of large areas of Iraq last month. The Kurds moved in in the wake of fleeing Iraqi forces, gaining control — for the first time — of the full area they claim as Kurdish land in Iraq. So in effect, not only is Barzani calling for independence, but he plans to take a large chunk of previously government-controlled and oil-rich territory with him.

In an interview with the BBC, president Barzani reinforced his belief in the right to Kurdish independence.

"Iraq is effectively partitioned now," he said. "Are we supposed to stay in this tragic situation the country's living in? It's not me who will decide on independence. It's the people. We'll hold a referendum and it's a matter of months."

If the referendum goes through, most Kurds say the answer will be an overwhelming "yes."

“Independence will be a great thing for Kurdistan, but it should have been done a long time ago,” said Hawer Ismael, a university student studying business management.

Tailor Reaz Abdul Wahid agreed. “The sooner the better, but I think it will take some time. We have been trying for many years, so it won’t happen overnight,” he said.

Independence has been the ultimate dream for the majority of Kurds since their region was split between Iraq, Iran, Syria and Turkey in the wake of World War I.

With numbers surpassing 25 million, the Kurds are the largest ethnic group without a country of their own. In Turkey, the battle for independence has been long and bloody with few gains. The recent conflict in Syria gave Syrian Kurds their first chance to seize control of their own lands and today, they too stand on the brink of full independence.

In Iraq, Kurds gained semi-autonomy with the support of the US in 1991. Talk of full independence has been frequent, but this is the first official move towards a complete split from Iraq. But are they capable of the unity such a move would require?

Much of the country remains split between the Kurdistan Democratic Party and the Patriotic Union of Kurdistan who fought a three-year civil war in the 1990s before settling on a power-sharing agreement. Both still operate somewhat independently and hold their own security forces.

But most Kurds believe their leaders are capable of uniting under a Kurdish State flag.

“It won't be easy as there are different groups and different parties, but if we unite we will be stronger and an example to other Kurdish regions,” said Ismael, the university student.

The consequences for Iraq

The central Iraqi government is already dealing with the declaration of an Islamic State along its northern and western borders. Many say a Kurdish break from the already weakened Maliki government will further destabilize the country.

“I do not like this call for independence. I reject it!” said Dr. Bassil, a plastic surgeon and Arab resident of Kirkuk, which is now under Kurdish control. “I think it will make even more problems for our country.”

Ismael agreed that independence could further destabilize the central government and may even lead to further clashes, but he remains adamant that the time is right.

“This may be our only chance for this, so we must take it,” he said.

The most significant land gain for the Kurds in this recent crisis is the long disputed city of Kirkuk, whose population is split between Kurds, Arabs, Turkmen and Christians, all of whom claim historical ties to the oil rich city.

This new push for independence has been met with mixed reactions in this divided city.

Among the Kurds, everyone interviewed for this article welcomed Kurdish rule. Arabs and Turkmen were split with some hopeful Kirkuk could stabilize and progress if united with the prosperous Kurdish region. Others, like Ahmed Mohammed, an Arab store owner, were adamantly opposed.

“The Kurds don’t have the right to decide our fate,” he said.

Reaz Abdul Wahid, who lives in the Kurdish region of Kirkuk, said while he hoped for a peaceful transfer to Kurdish rule, there is a possibility of violent resistance.

“In my opinion, the majority will oppose this. But making Kirkuk a Kurdish area is necessary because the Kurds have suffered so much for so many years from the Saddam region and the policies of the new government,” Wahid said, adding he himself was one of thousands of Kurds arrested and tortured during the reign of Saddam.

Harem Sazan, a Kirkuk landowner, said he believed Kurdish rule would bring stability and an economic boom to the city.

“Within five years I think Kirkuk could be like Erbil," he said, referring to the rapid economic expansion of the Kurdish capital which stands in stark contrast to the instability and economic stagnation that plagues much of Iraq.

"If no one opposes this take over it will be a great thing for all of us — Kurd, Turkmen, Christian and Arab,” he said.

But as always, conspiracy theories abound.

“Clearly the USA and Israel are behind this,” said an engineer who gave his name as Qutaiba. “How could Bazani make this decision without their support? We know the peshmerga have their deals with Israel.”

Dr Bassil says the Kurds will never pull off such a bold move, with or without international support. “It’s all just talk,” he said.

As for the Kurdish claim over Kirkuk he added: “They themselves know they are wrong in making this claim. This city does not belong to any one people. It must be shared between all the people who have a heritage here.”