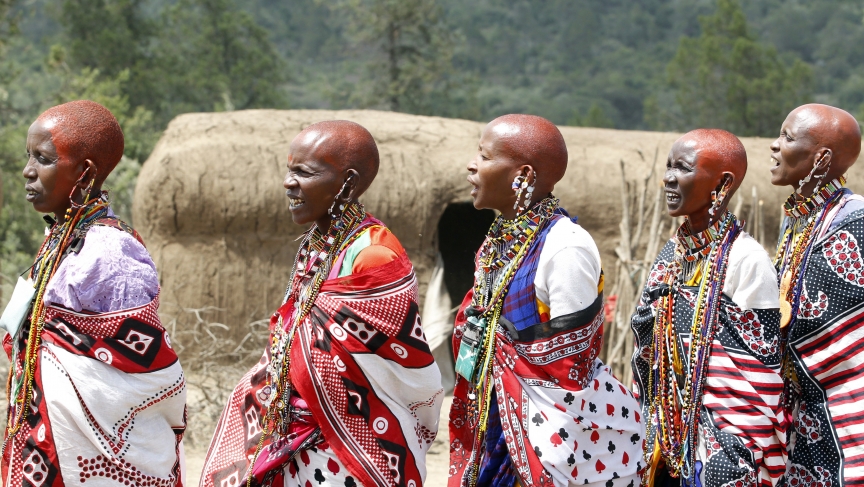 Maasai women, with their faces decorated with red ochre, parade as they participate in the preparation of "Entoto," a traditional coming-of-age ceremony in Olkerin Manyatta, Narok County, about 67 miles west of Kenya's capital Nairobi, March 18, 2012.
Credit:

Stopping female genital mutilation has been a global priority for years.

But the BBC's Anne Soy has been speaking to a group of women in Kenya who support FGM, as it's often referred to. She attended a meeting that was attended by over a thousand women from eight different clans belonging to the Maasai tribe in Kenya.

"They said that no one consulted them even when the country was coming up with laws that prohibited FGM, and so they felt that they were being discriminated against and they needed their voices heard," Soy says.

The meeting of the Maasai women was part of a series of gatherings that came about after a court case was brought against parents of a girl who was circumcised and died as a result. The women told Soy that the practice has been handed down to them from previous generations and they see no reason for it to be stopped.

They also argue that men are circumcised too — a practice that has been encouraged because it may help reduce the number of HIV/AIDS cases.

Soy says for the Maasai women, FGM is an important rite of passage.

“It marks the point when a girl stops being a girl and becomes a woman. In their eyes, anyone who is not circumcised is not a woman and not fit to carry out certain traditions," she says.

Soy points to a study that was carried out in 2009 and showed that 7 out of 10 Maasai girls undergo FGM. She says the few Maasai women who have abandoned the practice have been shunned in the community.

Soy says when she first thought about reporting on this story, she was afraid — because she comes from an ethnic community that traditionally has practiced FGM.

"I know from my own culture that a woman who is not circumcised is seen as a child in front of a woman who has been circumcised. I thought that would be a barrier," she says.

But she was finally able to find women who were willing to talk about the issue.

"Most of the people who still want to carry on with this practice are illiterate. They feel left out. Representatives come from Nairobi to their villages and tell them that this has been decided on and they have to stop this practice. They feel like they haven't been consulted," Soy says.