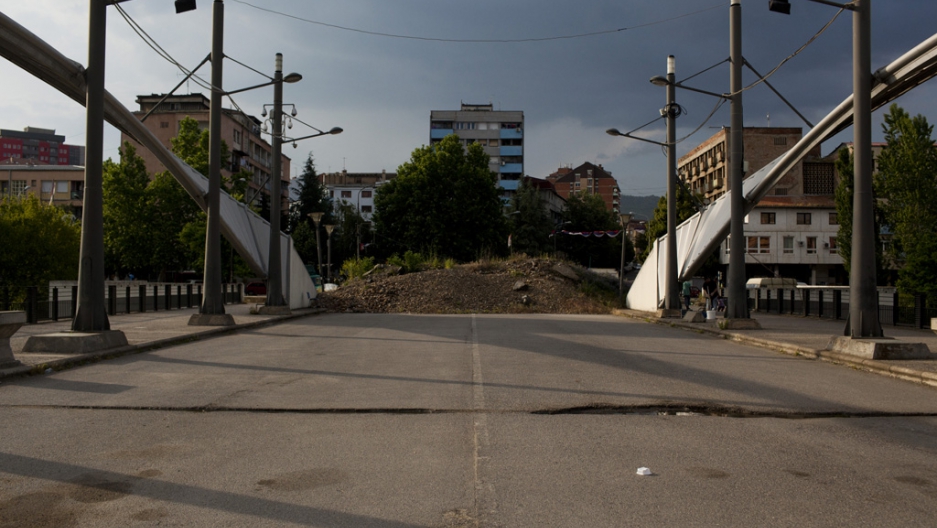 MITROVICA, Kosovo — We came to the bridge in search of redemption.

Not the religious kind, but the only kind of redemption that can heal a place and its people — especially the young — even when they are divided by ethnic hatred, by the memory of war and by a youth unemployment rate around 60 percent that leaves both sides vying for limited opportunities.

A gritty mining town with a population of about 100,000, Mitrovica long had a reputation for punching above its weight class in Europe’s rock venues. There were legendary lead guitarists coming from the brick row houses around the Trepca copper and silver mines.

The bands were often a combination of ethnic Albanians, who today make up 85 percent of the population, and Serbs, who make up the other 15 percent. No one paid much attention to the ethnic dividing line until 1991 when the wars in the Balkans first got rolling and inevitably landed here in 1998 and 1999.

Having covered the Kosovo war, I wanted to come back and see if that legendary music scene had returned. And so photographer Ron Haviv and I set out to revisit the places and the people we knew to see how Mitrovica was faring.

Sadly, what we kept running into was the same old tune: ethnic tension and a smoldering threat of violence. NATO peacekeeping forces police the bridge over the River Ibar — which divides ethnic Albanians on the south side and a Serbian enclave on the north — day and night to prevent the two sides from clashing even now, 15 years after the end of the war in Kosovo.

News came last month that the bridge was once again the scene of violent clashes, this time between NATO peacekeeping forces and protesters.

In 2004, clashes between Serbs and ethnic Albanians resulted in four deaths, and the bridge has been a front line with razor wire and sandbags ever since.

The confrontation this time came after the clearing of a blockade on the bridge that Serbs had erected three years ago to prevent Albanians from crossing over. The Serbs responded to the clearing by marshaling heavy pots of evergreens six rows deep to reestablish the blockade. They dubbed it a “peace park.”

The ethnic Albanians gathered in protest on the south side and waved red Albanian flags calling for the NATO forces to clear the blockade. BBC footage of the clashes showed some ethnic Albanians throwing rocks and NATO peacekeeping forces responding with tear gas and rubber bullets. Six vehicles were torched. Twelve policemen and 10 civilians were injured in the clashes, according to the BBC. There were ten arrests, according to local news reports.

This scene was definitely not what we came for.

In the days just before this resurgence of violence, we were still hopeful in our simple quest to hear some good music.

Two community activists and friends, Ardiana Osmani and Milos Golubovic, were confident we would succeed. They come from different sides of the bridge but have worked hard to bring their respective communities together by hosting peace gatherings — including an international conference sponsored by the University of Massachusetts, Boston two years ago — here in Mitrovica. Ardiana is ethnic Albanian and Milos is Serbian.

They exuded confidence that the two sides were working hard to come together. They talked about various cross-community enterprises funded by international donors, including a famous music program known as The Mitrovica Rock School. They also cited the new International College of Business, Mitrovica (ICBM) as an example of ethnic Albanians and Serbs working together.

Meanwhile, the tensions simmer and the people who work to try to reconcile the two communities are growing weary. Even Ardiana and Milos, who are nothing short of heroic in their efforts, seemed to be despairing at times.

Milos wanted to show us the Rock School, and we were excited to see the Serbs and ethnic Albanian students and teachers working together.

“Well,” he explained, “actually they have separate campuses and they don’t play together in Kosovo only when they leave the country.”

On the north side’s Serb-only campus, a huddle of kids dressed in black smoked cigarettes. The walls were covered with iconic posters of Jimi Hendrix, Bob Marley and Jim Morrison of The Doors. Behind the studio doors came the sound of crashing of drums and some students hammering out a lick that sounded like a very rough rendition of “Smoke on the Water.”

Inside one studio, Goren, a 35-year-old Serbian guitar teacher, was offering instruction to his Serbian student, Stephan, who is 18. Surrounded by several sets of drums and a wall of vintage 1960s amplifiers, they were working on scales. They took a short break to talk about the Rock School.

“It’s about music, not about politics,” said Goren, who asked that his full name not be used as he explained there were still some threats that came for being part of a school that dared to cross the divide, even if it did so tentatively and only outside of Kosovo.

“We have to be careful,” he added. “It’s still very hard for everyone here.”

Asked if he thought there would be a time when his teenage student might be playing in a band with ethnic Albanian musicians from the other side of town, he said, “Yeah, sure, in about 50 years. Or, maybe, a thousand. Hard to tell.”

Our journey to the International Business College was equally disappointing. While the ethnic Albanian and Serb students did join in field trips and some overlapping student councils, there were two separate campuses and very little collegiality between the two sides.

A recent graduate, Egzon Fejzullahu, 23, pulled together a group of ethnic Albanian students for us to speak with and he started the conversation, trumpeting the idea behind the school:

“Business is the place where even the worst enemies can come together. Business is where success means crossing borders and boundaries.”

It sounded like the language of a promotional brochure, and as it turned out he had studied marketing and was working part time for the school. But fairly quickly, he turned the corner toward a reality that he said saddened and frustrated him and just about all the students.

He said, “So far there really is no cooperation in business. I don’t know when that will happen. We are all waiting and hoping.”

One of the most glaring examples of the failure of the government and the two sides of the business community to work together is the largely shuttered Trepca Mines sitting atop vast reserves of iron, zinc, lead and copper.

Throughout history, the mines have been productive and frequently controlled by empires from Rome to the Ottomans.

After the country of Yugoslavia was created following the Paris Peace Agreement of World War I, British mining interests exerted control. At the height of the Tito era in the 1970s, 22,000 people worked at Trepca. Now there are dozens of employees operating one small section. The vast sprawling complex is rusted and derelict as the new government of Kosovo and private investors from China, Greece and beyond vie for control.

Meanwhile, youth unemployment is soaring throughout Kosovo and most acutely in Mitrovica, where it is estimated that over 65 percent of youth ages 15 to 24 are neither employed nor in school.

On the north side, sullen teenagers from the Serbian community, which these days feels more isolated than ever, sit on a broken concrete wall overgrown with weeds and smoke cigarettes. They eye the other side of the bridge where ethnic Albanian youths skateboard and ride bikes and where families enjoy a small park with kiddy rides and trampolines and vendors selling popcorn.

High levels of unemployment exist on both sides, and most of the young people who do have work seem to be employed by NGOs, which have created a kind of false economy built on aid from donor states and an alphabet soup of acronyms for the different agencies.

We continued our search for some genuine rock ‘n’ roll and wandered past bars where DJs played rap and some lounge bands that played incredibly loud and bad electronic dance music.

Down one of the winding roads on the South side, we came across Naim Mursezi, 34, a well known lead guitarist who Ardiana knew. We stopped to have a coffee as a light rain spattered on the tin roof of an outdoor café.

“Mitrovica was a cradle of rock, man, for sure,” he said, measuring three spoonfuls of sugar and stirring it into black coffee.

He creaked back in a wooden chair and told the history, “It was a big scene here in the 1980s and early 1990s, but it ended with the wars and the NATO bombing.”

He said he started a basement rock club about 10 years ago, but added, “I couldn’t sustain it. “

He added, “We used to play together and listen to music together. In any good rock bar, you would find Serbs and Albanians. The war changed us. I wish that was not true, I wish I could take you out and show you we still have it, but it’s not here. The music is over now.”

Ardiana and Milos tried their best to help us navigate Mitrovica, but we never did succeed in our quest for music. That doesn’t mean it wasn’t there, they both insisted, but it definitely seemed hard to find.

Last month, with the news breaking of violent clashes on the bridge, I wanted to get in touch with Ardiana and Milos to make sure they were okay. I reached Ardiana by phone and she was at her favorite night club, House Pub.

I asked her about how she felt about the resurgence of violence. She replied, “I’m upset, I’m angry. I have a lot of words for the way I feel. But most of all I just feel terrible. I can’t believe we are going back to that.”

While she spoke, I could hear a drum beat kick in over a crackling phone line and a grinding electric guitar and muffled, angry lyrics in Albanian.

“You hear that?” Ardiana asked. “I told you there was still music here. It’s just hard to find and you gotta keep looking.”

See more of Ron Haviv's photography from the wars in Yugoslavia