I'll get to the superhero in a second.

But first, a backstory: I read Gene Luen Yang's book, “Boxers and Saints” last winter. It's a two-volume story.

After completing the first book, honestly, I didn't feel satisfied. Something was missing. I hoped it was intentional. It was a pair of books after all.

Upon completing the second book I realized the books needed one another. He wove two story lines of two separate characters together into a compelling narrative. You left the book impressed with the story, and the sheer cleverness of its construction. I’m not sure what to compare it to, and I’m terrible at analogies. But, picture admiring the art inside the building, and then admiring building itself. The Guggenheim in NYC comes to mind.

When I heard Yang was reviving a golden age comic book hero in his latest book, “The Shadow Hero,” I had to read to it. If it was someone else, I might not.

Many of these old heroes are lame. Their powers are lame. The stories are trite. You can tell they were rushed into production to make a buck. So I had to know why Yang wanted to revive: The Green Turtle.

I mean, the name is bland. Though to be fair, so are a number of superheroes, like The Green Lantern. And while we’re on this tangent, so are the ones who follow the pattern: animal + man = name.

Okay, back to the book.

I knew it held a cultural connection to him. Yang is the son of immigrants. And The Green Turtle is thought to be the first Asian-American superhero. The cartoonist Chu Hing created it back in 1944. He was a pioneer. He was one of the first Asian Americans in the American comic book industry. His publisher tasked him to create a superhero of his choosing.

He chose, of course, The Green Turtle. The masked and caped man defended China against Japan during WWII. And while he didn’t have a super-power, he did avoid bullets with ease.

That's pretty much all Yang could nail down as fact in his research. But the rumors were much better, and may have explained more than the facts ever could. Yang includes this at the end of the novel. But I feel like it also works as a good primer. 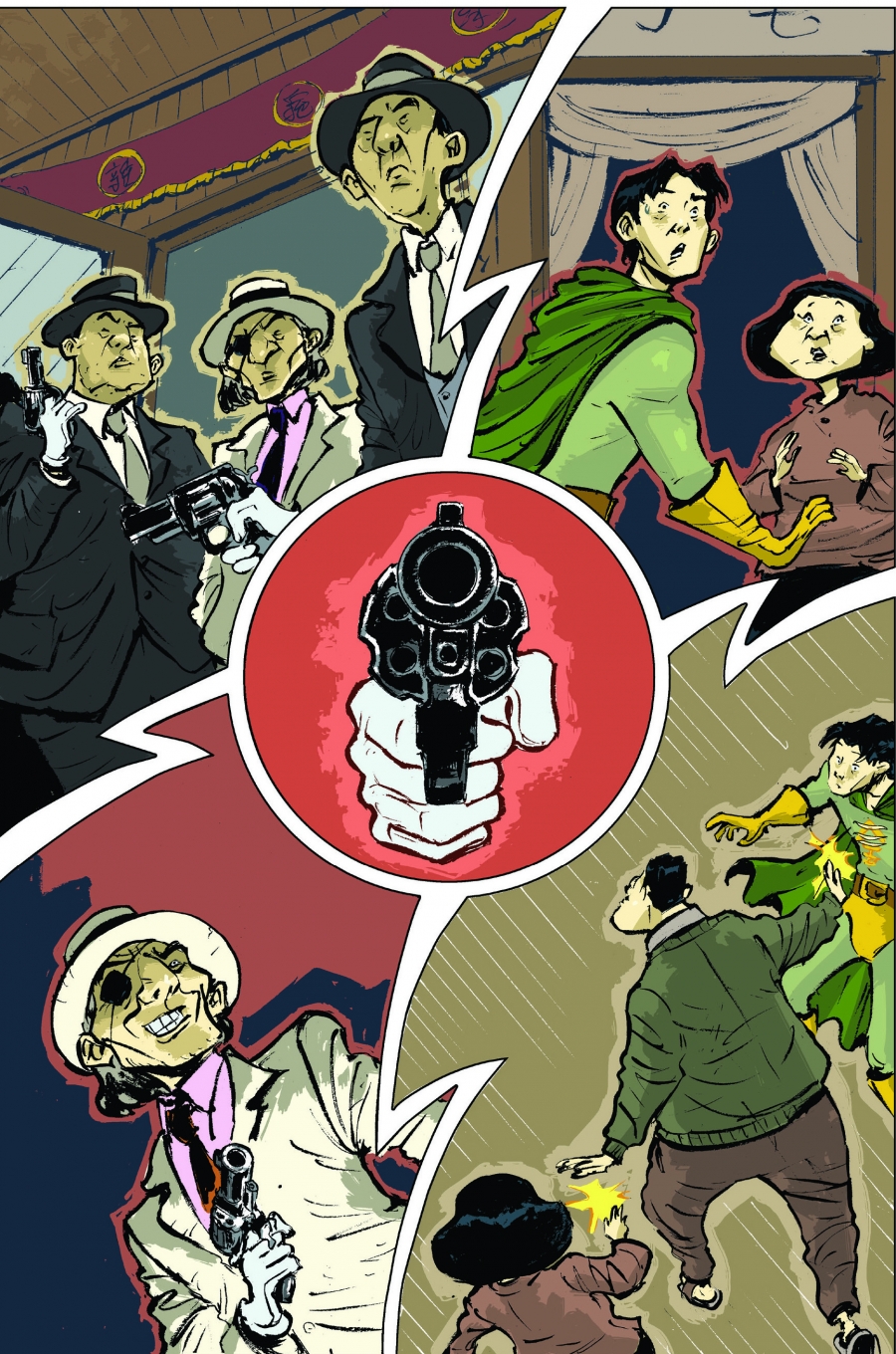 In an interview with cartoonist Sonny Liew, his co-creator in the project, Yang asks for Liew's initial reaction to the Green Turtle. Here's his answer.

"I thought the whole attempt to cover up his face was fascinating and hilarious. … He went to ridiculous lengths – which made it visually interesting, but also made you really think about cultural expectations in the mass media that continue to this day…"

Yang says there was a battle being played in the actual pages of the old comic book. While Hing refused to show his character’s face, it’s believed the publisher colored the hero’s skin bright pink, as a way to show his whiteness.

Whatever the case, Yang says the adventures of The Green Turtle didn’t last very long. And the one thing missing from the Green Turtle was an origin story.

All good superheroes need one. Yang and Liew filled that void. They placed him as a kid growing up in a San Francisco-like Chinatown in the 1930s. The characters struggle, even with their superpowers, to fit into the world. Yang writes as much on his website:

"Superheroes are also about immigrants. Take at look at Superman, the granddaddy of them all.  His parents sent him to America in search of a better life.  He had two names, one American (Clark Kent) and the other foreign (Kal-El).  He wears two sets of clothes and lives in between two cultures.  He loves his new home, but a part of him longs for his old one."

There's a spirit shadow in the form of a turtle that gives The Green Turtle his power: he ability to never be shot. That spirit is self-aware, too. It knows such power is somewhat lame. It doesn't protect you from a knife, let alone knives.

It reminds The Green Turtle about the lameness of his request throughout the book, usually at in opportune moments. The story brims with humor.

What the origin story does best though, is the introduction of a strong character: The Green Turtle's mom. She wants more for her son. She wants him to be a superhero. So she pushes him down that pathway, injuries be damned. 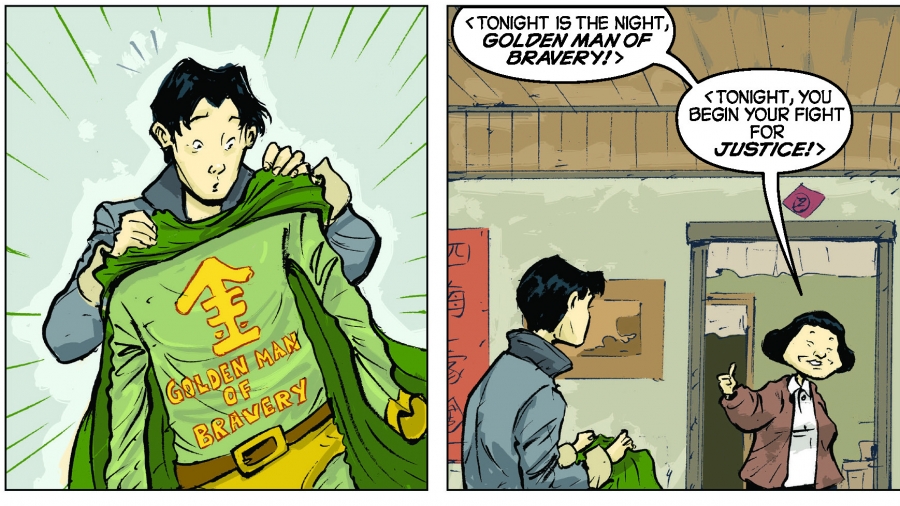 In "The Shadow Hero," Hank Chu, simply wants to help run his family's grocery store. But it's Chu's mother who pushes her son towards his superhero path.
Credit:

“With a lot of my work, what I’m interested in is taking stereotypes and undermining them by fleshing them out,” he says. “I want the main character’s mother to start off like the stereotypical tiger mom. And then I hope by the end of the story that we move her beyond that.”

Still, there aren't too many Asian American superheroes. So can The Green Tortoise fill that void? Who knows? It's just great having a new superhero to care about. When you complete The Shadow Hero, you feel like you did with Boxers and Saints. You want more. But not just a second one. You want a whole series.

You want to follow The Green Turtle wherever his adventures take him.