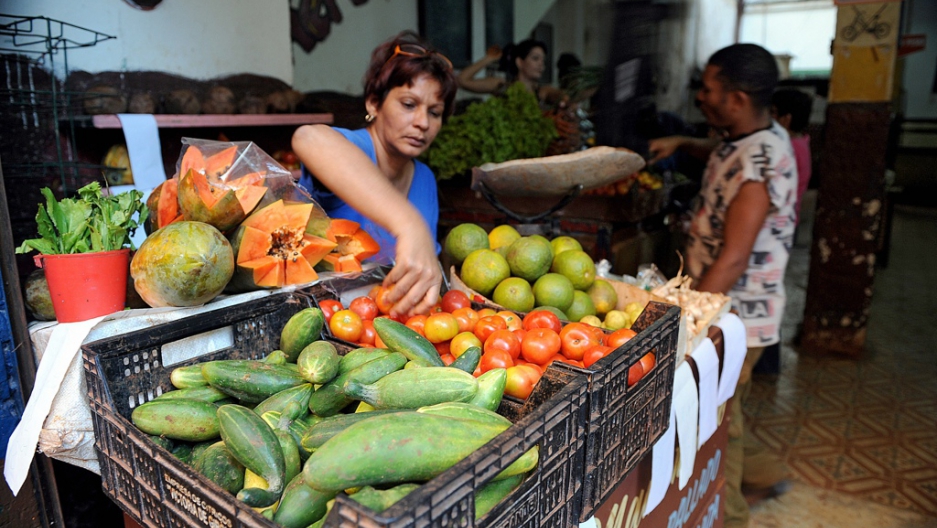 HAVANA — San Francisco restaurateur Narsai David is in food heaven as he wanders through the stalls at a large farmer's market. “The papayas are much sweeter and fresher here,” he exclaimed. At another counter, his lips puckered as he tasted a hot pepper.

David is meeting with Cuban chefs in an effort by Green Cities Fund, a Bay Area nonprofit, to establish a culinary school in Havana. The group is awaiting approval from Washington to legally operate as required under terms of the United States embargo against Cuba.

Meanwhile, David is involved in a cultural exchange with lots of people in tall white hats. This morning he will lead a workshop while preparing a picante sauce using fresh papaya, vinegar and chile.

David now knows that the mere existence of well-stocked farmer’s markets is a big change for Cuba. While they had existed for some years, starting in 2008, the government encouraged private and co-op farming, which has markedly increased food supplies.

But food remains expensive for ordinary Cubans. And some items suddenly go missing, warned Imogene Tondre, an American who lives in Cuba and is program director for Green Cities.

“When in Cuba, when you see something you need, grab it,” she told David.

The papayas and virtually all the other products in this market are grown without use of chemical fertilizers or pesticides. Cuba has become the world’s largest per capita consumer of organic food.

“About 90 percent of the food raised in Cuba is grown without chemicals. Almost all our pork, beef and chicken don’t use steroids or antibiotics,” said Fernando Funes, a retired agriculture ministry official known as the father of Cuban organic farming. “We are protecting our health and the environment.”

Yet Cuba still imports an estimated 55 percent of its food, according to Funes. As Narsai David was about to find out, Cuban food production is very complicated indeed.

When the USSR collapsed in 1991, Cuba lost trade subsidies that had kept the economy afloat. The economy shrank by 35 percent from 1989-93. So the government could no longer afford to import industrial fertilizers and pesticides. Food became scarce, and the island was forced to adopt organic methods.

The government mobilized agronomists and farmers to develop organic methods suitable for a tropical climate. Food production initially dropped, but eventually recovered to pre-1991 levels for many crops.

More recently the government has instituted reforms to give greater play to free markets and de-emphasize the role of the state. Before 1991, 75 percent of Cuba’s agricultural land was farmed by large, state enterprises; today 75 percent is farmed by individuals and co-ops, according to Funes.

Small farmers have more incentives to produce and innovate, he said. That’s not capitalism, he argued, pointing out that large agribusiness will never be allowed. “This is a new type of socialism, more realistic,” Funes said.

Socialism also means Cubans don’t pay more for organic products. Organic farming is actually cheaper than industrial farming. Farmers don't have to pay for expensive chemicals and labor is cheap. In addition, Cuban farmers don’t raise prices well above the cost of production as frequently occurs in the US.

But organic farmers, co-ops and state farms still don’t produce enough food to feed the island. At the Organoponico Vivero Alamar organic farm on the outskirts of Havana, Isis Salcines explained why. She told Narsai David that the co-op farms 25 acres of tomatoes, lettuce and other vegetables.

Organic production for an island of 11 million people isn’t easy, she said. A single bug infestation can wipe out a crop. “Organic farming is very hard.”

Food production in Cuba has improved but not enough to meet growing demand. The island has been bedeviled by hurricanes and other weather problems. The transportation system remains broken, with farmers having difficulty getting products to market. The government has had a hard time converting the old state farms into co-ops and creating incentives for more production.

The US economic embargo on Cuba causes serious problems as well. While US law allows American companies to sell food to Cuba, the Cubans must pay cash in advance. Cuba can’t sell cigars, rum or anything else to the US, making normal trade impossible. The US remains a natural market for Cuba but inaccessible for the time being.

David has gotten an earful of explanations and excuses about Cuba’s shortcomings. But he’s impressed with the dedication of chefs at his workshops. He turned on a blender to mix papaya and a dash of hot chile. He suggested using the seeds as a garnish.

David became famous as one of the originators of California cuisine, which emphasizes the use of fresh, local products. He said Cuban chefs and farmers should expand their existing networks to make use of the island's wonderful products.

Funes dreams that someday all Cubans will have access to fresh, organic food at affordable prices. He’s just not sure when.

Special correspondent Reese Erlich is author of “Dateline Havana: The Real Story of US Policy and the Future of Cuba.”