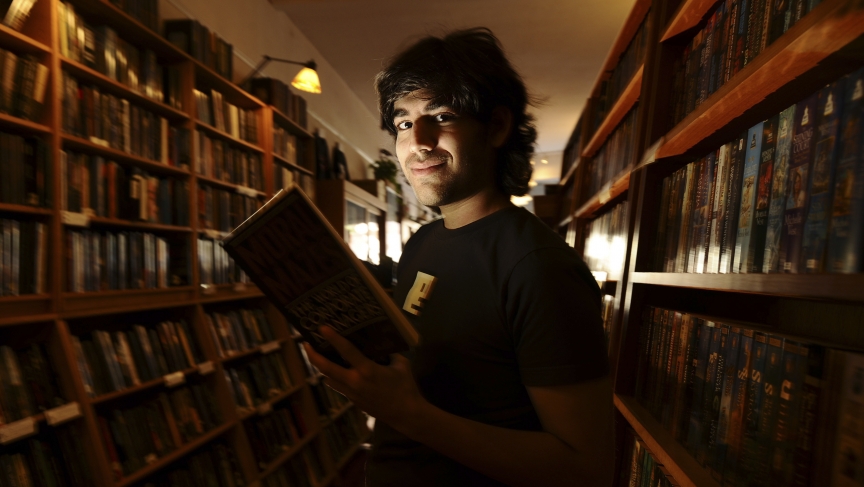 Aaron Swartz poses in a Borderland Books in San Francisco. The Internet activist is the subject of new documentary about his life, activism and death.

Aaron Swartz is remembered as many things — an early partner and creator of Reddit, a self-made millionaire by the age of 19, and a hacktivist who ushered in a huge wave of opposition to the Stop Online Piracy Act.

But beyond his public roles, he was a young man who truly believed he could change the Internet — and the world — for good. Now he's the subject of a new documentary that chronicles his fight to keep the Internet open — and his death by suicide after he was prosecuted by the federal government for those efforts.

In the fall of 2010, Swartz used MIT's computer network to download 4.8 million academic articles and documents from JSTOR, a paid-access online database of academic publications. Over the next few months, Swartz was indicted by a federal grand jury and eventually charged by federal prosecutors on more than a dozen charges. He faced a prison sentence of up to 50 years, plus $1 million in fines.

Swartz's then-girlfriend, Quinn Norton, says he was offered a plea deal, but it was one he could not accept — he did not want to live life as a felon. Swartz eventually took his own life, sending shockwaves throughout the hacking and Internet communities.

Swartz's story is one of the fight for a free Internet, and the complicated relationship between hackers and the government. It's told in the new documentary "The Internet's Own Boy: The Story of Aaron Swartz," from director Brian Knappenberger.

"Right after he passed, there was this big wave of anger, frustration, and sympathy that came even from people that didn't know him," Knappenberger says. "I think that the reason for that is he did sort of symbolize a kind of choice."

Knappenberger says that after Reddit was sold to Condé Nast, Swartz and his other colleagues became very wealthy. But Swartz chose a different path than many young tech moguls.

"That sale made him a really rich 19-year-old," Knappenberger says. "Instead of staying on that Silicon Valley start-up treadmill — in other words, doing what most people do — of just doing it again, building a flip, finding another business and selling it to a big corporation again — he took a pretty decisive turn towards social justice issues."

Knappenberger says Swartz felt it was wrong to lock publicly-funded academic research away behind high-priced paywalls. He wanted to set the information free — and found a way to do it.

"Aaron, to me, seemed like he wanted to work very much within the system. He wanted to sort of 'hack' it in the best possible sense, understanding that social systems can be changed and altered," Knappenberger says. "A felony really takes you out of that system. I mean, you can't even vote in some states if you're a felon. And that was the one thing prosecutors were never going to budge on — they wanted him to be a felon."

For Swartz, having a felony conviction was a grave designation. It would be much harder for him to challenge lawmakers when it came to things like SOPA and the Protect IP Act, laws that many in the tech community felt would stifle the freedom of the Internet.

Supporters of SOPA and PIPA claimed that the bills targeted "rogue" foreign websites that encourage online infringement. Those like Swartz who opposed the the bills — including major internet players like Google, Wikipedia, Reddit, Craigslist and others — argued that these legislative measures contained vague language that would create a devastating new tool for silencing legitimate speech all around the web.

"He had this ability to explain these complex issues to people in ways that they found relevant to their lives," Knappenberger says. "He was able to take the message of SOPA and really explain it in ways that got people motivated and made them understand that this was going to be damaging to this thing that they love — the openness of the internet."

Initially, hundreds of lawmakers in Congress supported the bill, and the legislation was on the fast track to becoming law. That is, until Swartz helped lead a charge against the bill and sparked a huge online protest.

"It culminated in a black out day, where a lot of people actually blacked out their websites," Knappenberger says. "You just saw Congress folks fleeing from this, just jumping ship, and it was dead within a period of about 48 hours. This is how democracy should work in the digital age. It was kind of a shining example."

In the midst of the SOPA victory, however, Swartz was still wrestling with his prosecution.

"Once the prosecution starts, it's just this machine that can't be turned around again," Knappenberger says. "The prosecutor keeps ramping up charges against him. He's initially charged with four felony counts, and later he's given a superceding indictment that ups that to 13. Eleven of the 13 are the result of this wildly outdated law called the Computer Fraud and Abuse Act, which is a computer law that hasn't really had any meaningful changes since 1986. It was created after the movie 'WarGames' with Matthew Broderick."

In the end, Knappenberger says that Swartz ran out of options when it came to plea deals — something that pushed him over the edge: "He ends up taking his own life, actually within a few days of the two-year anniversary of his initial arrest."