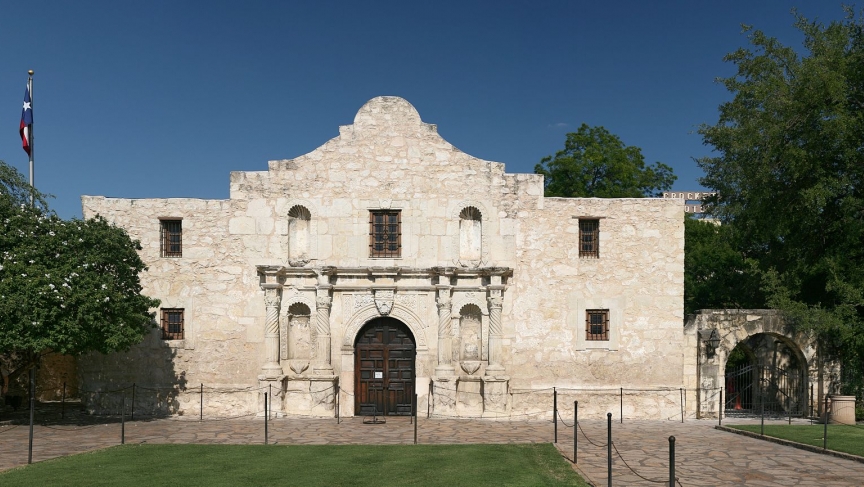 The chapel of the Alamo, San Antonio, Texas

A big piece of Texas history is coming home.

Remember the Alamo? In case you flunked history or missed the 1960 John Wayne movie, back in 1836 Texan rebels led by Davy Crockett, Jim Bowie and William B. Travis were besieged by Mexican forces.

They held out for 13 days in a crumbling adobe mission called the Alamo in what’s now San Antonio, Texas, before being defeated and killed.

Their sacrifice makes the Alamo a sacred site for many Texans, especially Anglos. So there was delight Thursday when a private collector announced he's donating all of his Alamo memorabilia to the state of Texas.

The donor is none other than British singer-songwriter and drummer, Phil Collins. You know: Sussudio, In The Air Tonight, Against All Odds.

“It started with Walt Disney’s portrayal of Davy Crockett, and I became a huge fan,” Collins told a BBC documentary team in 2012. “I’ve got pictures of me dressed as Davy Crockett when I was 5 or 6 years old. Then a few years later John Wayne brought out his film, which blew me away.”

So began a life-long obsession.

Back in 1973, Collins came to the US for the first time as a young drummer with Genesis, on its first US tour. As soon as he got a break, the first thing he did was make a pilgrimage to see the Alamo.

“One day in the ‘80s,” he recalls, “I was in Washington and there was a shop — Gallery of History they were called — and I was looking around, and there was a letter from Davy Crockett. I’d never thought that such a thing could exist. That was the first piece I bought.”

His collection now includes a howitzer, one of Davy Crockett's rifles and one of Jim Bowie's famous knives, as well as cannonballs, musketballs and other artifacts dug at the site. Then there's all kinds of documents, including the final muster roll drawn up within the walls of the besieged fort. “It was there when the Alamo fell,” says Collins. “If only documents could talk.”

Believe it or not, Phil Collins is now one of the foremost experts on the Alamo. And he's the first to admit that the battle is surrounded by myths.

“The saddest thing I think is the inherent racism. No one talks about the poor Mexican soldiers. It’s a very dark, deep, story. It’s weird — the more I find out about it, the more disappointed I get. (But) I’m no less fascinated by it.”

Collins says that — being British — he can't talk about what the collection is worth, but it's believed to be in the millions. “I’m fortunate,” he says. “I earned my money and this is what I do with it. You know, I don’t buy Ferraris. This is what I spend my money on. It’s part of my life.”

Later this year the collection will be heading back to Texas.

Collins, who's 63, says his goal is to keep the collection together, “which is why I’ve got to be careful what I do with it, when I move on, you know, to the great drum-kit in the sky.”