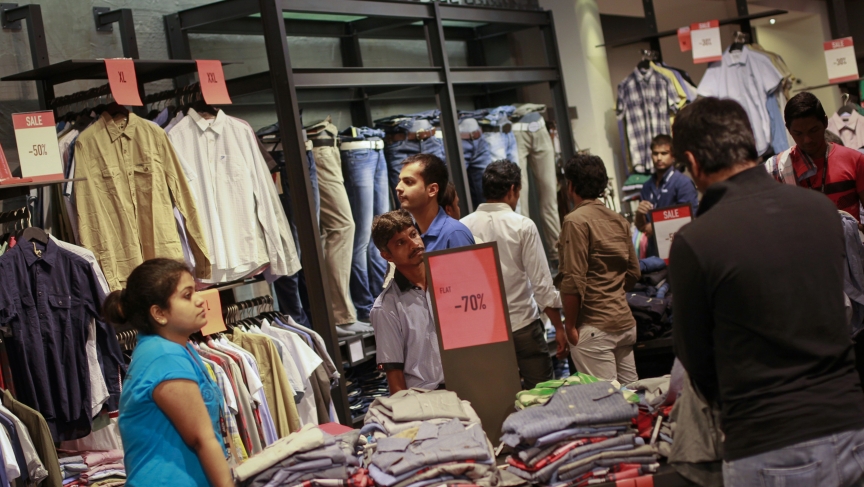 People shop for clothes during a seasonal sale at a store inside a shopping mall in Mumbai.

A few days ago, my family and I flew from Chicago to the swanky international airport in New Delhi. We got a cab and drove through the evening rush hour.

My daughter, who’s four, pointed out the cows, water buffaloes, goats and dogs in the street.

Soon we turned a corner and found ourselves on a street that wouldn’t be out of place in downtown Chicago. Rich-looking Indians stepped out of chauffeur-driven BMWs, Audis and Jaguars. There were tall glass buildings on both sides; beautiful women in sleeveless tops and miniskirts filled the sidewalks with perfume.

When we stopped at an indoor mall, international brands welcomed us — Gucci, Starbucks, Apple, Chicago Pizza and Krispy Kreme. It was a Tuesday evening, and there were more shoppers here than I had ever seen on any Black Friday in any mall in the US.

My daughter saw an ice cream place and pulled me toward it. It was a Häagen Dazs. I paid 290 rupees, about $5, for a single scoop.

As we walked around, feeling amazed at how busy all the stores were and how much people were spending, my daughter asked me to buy her a princess book. In the US, I usually buy her books that are on sale, but I didn’t bother to look at the price in New Delhi. I was coming from the States. I was supposed to be rich. How could I not afford a book or an ice cream cone in India? I paid 600 rupees, around $10, for the book.

The next stop was Starbucks. Another 300 rupees, or $5, bought me two cups of regular coffee.

At the end of the day, I realized that between cabs, ice cream, books and coffees, I had spent about $100 within a few hours of arriving in India.

I thought I’d better watch myself, or the brands and habits I’ve grown used to in the US will cost me dearly in India.

Maybe I should eat local here, I thought. Instead of buying mango-flavored ice cream from Häagen Dazs, I should stick to real mangoes.