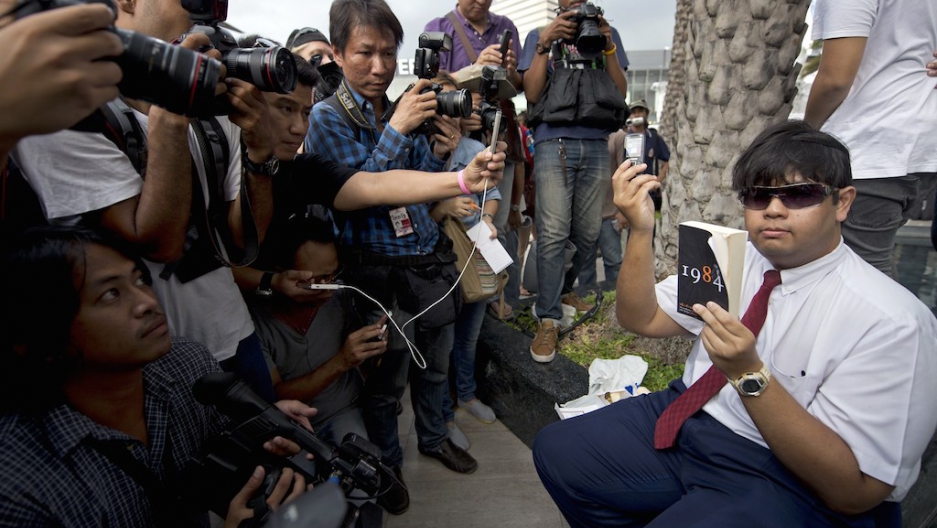 BANGKOK — One month ago, after Thailand’s army seized control of the nation, the instructions were quite clear: Praise us or keep your mouth shut.

Dissent is now punishable by detention in military-run Thailand. Those who have directly condemned the coup in public have been summoned to military camps for “attitude adjustment.”

The army has instructed citizens to feel “happy” about their takeover. The generals have hoped to sway them by screening the World Cup for free and holding festivals featuring ponies, free food and camo-clad dancer girls.

At the same time, officials goad citizens to turn in co-workers expressing anti-coup sentiments. Come across a photo on Facebook or Instagram in which a Thai citizen criticizes the coup? Police will dole out $15 if you rat out the offender.

Thais dismayed by the coup know speaking out is dangerous. So they’ve resorted to a range of silent and subtle protest techniques, each designed to determine just how petty the authorities can be.

They have arrived at this approach the hard way. Thailand’s military and police appear willing to drag away protesters for the most absurdly minor offenses. The list now includes:

Wearing the wrong shirt: T-shirts have repeatedly landed protesters in military detention. The offending shirts aren’t scribbled up with slogans urging bloody uprising. One simply read “PEACE PLEASE” and was worn by a Belgian man at a Bangkok traffic circle briefly used as a rally site until troops drove protesters away. This week, a Thai woman in her 70s was arrested at a temple for wearing a shirt that simply said “Respect my Vote!”

Eating a sandwich: Since early June, student pro-democracy activists have handed out free sandwiches and staged quiet picnics in lieu of holding protests. Surely, the junta can’t arrest them for eating sandwiches, right?

Wrong. The sandwich activists announced a “picnic” on June 22 outside a glitzy Bangkok mall. On cue, a young Thai man showed up that afternoon. He pulled out a sandwich with trembling fingers and ate it in silence.

He was promptly surrounded by authorities and hauled off. Six others, according to the BBC, were also detained. Their offense? Possessing sandwiches with ill intent. Officers have previously thwarted “sandwich parties” in advance. Thai headlines have even warned that eating sandwiches with anti-coup intent is a criminal act.

Reading “1984” in public: The young sandwich-eating Thai was also reading 1984, the George Orwell masterpiece about a civil servant who tries to rebel against a dystopian tyrannical state. Previous gatherings in which Thais gathered on sidewalks to silently leaf through the book have gone undisturbed by authorities. But any future public readings could lead to more arrests.

Throwing up the three-finger “Hunger Games” salute: In the “Hunger Games” science-fiction series, the subjects of a cruel authoritarian regime raise three fingers to signal their dissent. Anti-coup Thais later adopted the salute and began flashing it in Bangkok.This form of protest has tactical advantages: You don’t have to carry around an incriminating sign, book or sandwich. But plain-clothes police have still managed to spot and nab Thai saluters.

Arrests for anti-coup dissent keep mounting. At least 500 to 700 people have been summoned or arrested by the junta, according to estimates provided by the organization Thai Lawyers for Human Rights. Detainees include deposed politicians, activists, journalists and small-time street protesters.

“In many cases, their heads are covered with black plastic bags so they won’t know their detention center’s location,” said Yaowalak Anuphan, an attorney with the group. Troops often refuse to reveal detainees’ locations to worried relatives, she said. But most are freed after several days worth of psy-ops sessions with military officers. “This is commonly known as an ‘attitude adjustment,’” she said.

Instead of gradually easing martial law, Thailand’s military appears keen on smothering even the meekest expressions of dissent. The generals insist their tight grip on society is necessary to “Restore Happiness to the People,” which has become the junta’s de facto slogan.

A top junta spokesmen, Werachon Sukhondhapatipak, even urged reporters to stop calling their power seizure a “coup.” He prefers “military intervention." Forced detentions? Those should be called “military accommodation,” he said.

But Thailand’s National Human Rights Commission — which now answers to the army — has told the army that harsh tactics will only “seed further resistance in society.”

“Thailand is like a sick man with cancer. But martial law is a very powerful dose of medicine,” said Nirun Pitakwatchara, a physician who heads the commission. “As a professional doctor myself, I know an overly strong dose of medicine can kill the patient.”