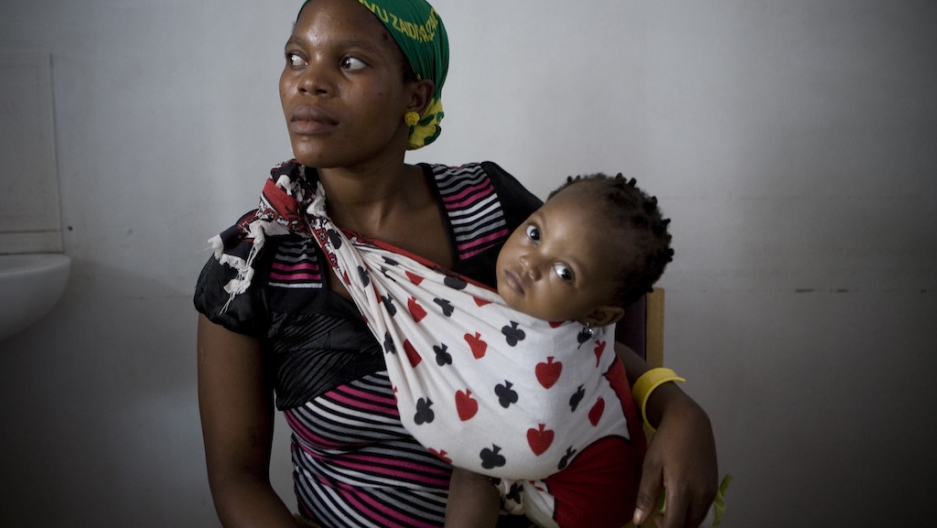 A woman and her child at the Mbagala Rangitatu clinic in Dar Es Salaam, Tanzania on April 4, 2011. Margaret tested HIV positive in 2007. She was counselled to use ARV prophylaxis after 28 days into her pregnancy to protect her baby, who was born free of HIV.
Credit: SIEGFRIED MODOLA
Share

“It is not good enough.”

In a video interview presented at Canada’s Maternal, Newborn and Child Health Summit last month, Tanzania’s President Jakaya Kikwete shook his head. He was talking about his country’s progress in preventing deaths among children under 5 years old. Since 2000, child mortality in Tanzania has dropped significantly from 147 deaths per 1,000 live births to 54 per 1000 just last year. But to Kikwete, it wasn’t good enough.

With the 2015 deadline for the Millennium Development Goals fast approaching, Tanzania is within reach of the MDG 4 target to reduce child mortality by two thirds—to a rate below 49 deaths per 1,000 live births. Much of the East African country’s progress can be credited to the dedication and determination of Kikwete and his team who have demonstrated the will to lead on the issue. The story of Tanzania illustrates the profound importance of political leadership to the health and well-being of women and children, even in resource constrained settings.

The world needs more government leaders to stand up and speak out for women and children. Two years ago, at a high-level forum convened by the governments of Ethiopia, India and the United States, participants gathered around the ambitious goal to end preventable child death. Emerging from that event was an effort that brought together the private, public and civil society sectors around a common roadmap called Committing to Child Survival: A Promise Renewed. Approximately 180 governments have since pledged to accelerate declines in preventable maternal, newborn and child deaths.

Today, a follow-up event called Acting on the Call: Ending Preventable Child and Maternal Deaths is being held in Washington, DC to highlight successes, analyze gaps, and focus on what is needed to sustain this momentum. This event is in direct support of the UN Secretary-General's unprecedented global movement to prioritize women's and children's health, Every Woman Every Child.

In the last two years, countries like Tanzania have turned its child survival pledge into action. Last month, the government sharpened the national health strategy and instituted a number of reforms, chief among them the decentralization of the health sector itself whereby local governments have more autonomy in making decisions for their communities. By having a greater say in the allocation of resources, local governments now can target resources towards those women and children in greatest need. President Kikwete has also pioneered the use of mobile technology to reach Tanzanians in even the most remote towns and villages. With a single cell phone text, community health care workers can monitor and report on drug stock-outs, for example, or communicate with pregnant women to ensure good prenatal care, transforming the lives of thousands of mothers.

To achieve the 2015 targets, Tanzania plans to scale up some of its most successful interventions. For example, the Ministry of Health is increasing the number of trained community health workers to improve the quality of care available in rural areas, especially for mothers and newborns. Efforts are also underway to strengthen the supply chain for life-saving commodities such as zinc and oral rehydration salts, which are used to treat pneumonia and diarrhea—two of the leading causes of child mortality worldwide.

Strengthening the supply of medicines and health care services is, of course, a critical step towards saving mothers, newborns and children from preventable deaths. But, it must be followed by a second step: increasing the public demand for life-saving interventions.

In too many communities around the world, the death of a mother or her young child is all too common. Worldwide, 6.6 million children under five died in 2012 alone. Forty-four percent of those child deaths occur within the first month of life, and each year nearly 300,000 mothers worldwide suffer pregnancy-related deaths. Under-five deaths are increasingly concentrated in Sub-Saharan Africa. The region is plagued with the highest risk of death in the first month of life but has exhibited the least progress in reducing the neonatal mortality rate.

The frequency of death inures communities to the tragedy that plays out each time a single life is cut short. For this to change, public attitudes need to change. Individual citizens need to demand that no mother or child die of preventable causes. As Kikwete said in May: “It is not right, it is not fair, for a woman to die for giving life to another human being. We cannot allow that.”

Under the banner of A Promise Renewed, leaders from the private and public sectors are calling on citizens to rally around national strategies for maternal, newborn and child survival. In Tanzania, the government is giving citizens a say in monitoring and reporting the quality of services available in their communities. Through the seemingly simple act of speaking out about issues of quality, mothers and fathers can become more deeply engaged in their own health and that of their children.

With less than two years until the 2015 MDG deadline, the world is at a crossroads. Momentum is building around global efforts such as A Promise Renewed. So, too, is the political will for meaningful change, as demonstrated by Kikwete. By working together, African leaders from the public, private and civil society sectors can build on the progress of countries like Tanzania, and create a continent-wide movement to give every African child the best possible start in life. Global partners like UNICEF and Speak Up Africa stand ready to help.

Kate Rogers is the Senior Programme Manager for Committing to Child Survival: A Promise Renewed at UNICEF. Nicole Schiegg is a Senior Consultant to Speak Up Africa, which is working alongside UNICEF to catalyze country-led action in support of A Promise Renewed.