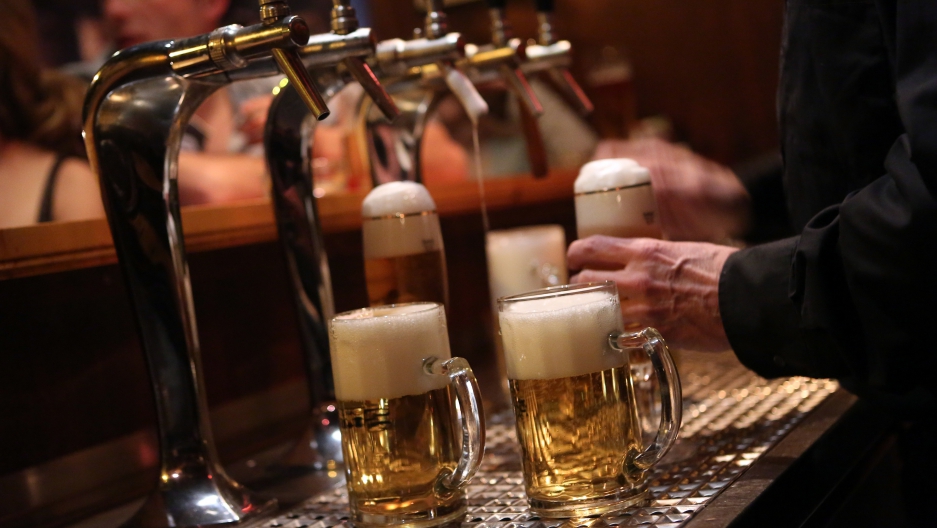 BERLIN, Germany — It's one o'clock in the afternoon at Bei Schlawinchen and the beer is already flowing.

Famous for keeping the taps running 24 hours a day, seven days a week for the past 35 years, this quintessential “kneipe,” or “dive,” is the last place you'd expect to find alcohol-free beer. But even this haven for hard-core drinkers offers two varieties, a Pilsener and a hefeweizen, or wheat beer, in deference to Germany's latest brewing trend.

While Germans are drinking less and less beer, sales of “non-alcoholic” beer, which contains less than 0.5 percent alcohol, have doubled over the past seven years, according to the German brewery association.

But not everyone’s a convert.

Seated at a table with Bei Schlawinchen's owner and several other afternoon drinkers, 59-year-old Gunter Schumann grouses about the new development.

“Maybe for when they're driving?” adds another perplexed drinker.

They may be a dying breed.

Although Germans still drink more beer per person than anyone but the neighboring Czechs and Austrians, consumption has fallen by a third over the past 25 years, as high production costs and low prices threaten hundreds of small traditional brewers.

“Not only is demand getting stronger, but they're bringing more women to the category,” she says.

Last year, alcohol-free beer consumption rose 12 percent as Germans slugged down 480 million liters of the stuff — meaning one bottle out of every 20 beers drunk nationwide was non-alcoholic.

While alcohol-free beer can still be difficult to find in the US, German breweries already offer more than 200 brands, including wheat beers, Pilseners, standard lagers, flavored beers and bottled “Radler” or “cyclist” — a mix of beer and lemon soda that's long been a beer garden staple.

Around for more than 30 years since the Radeberger Group first launched Clausthaler in 1979, non-alcoholic beer was held back for decades by its taste. As the market has grown more attractive, however, the brews have improved.

It's not just designated drivers and recovering alcoholics drinking it. Various brands including Carlsberg's Holsten, Krombacher and Warsteiner are aiming to compete with Gatorade for the sports drink market, emphasizing that alcohol-free beer, like the regular kind, is “isotonic,” says Birte Kleppien, spokesman for the Radeberger Group.

“Non-alcoholic beer is now not only a substitute for beer but also an alternative to soft drinks and even water,” he says.

Perhaps. But marketing beer as a health supplement these days isn't as easy as it may once have been.

More from GlobalPost: This graphic shows which teams have the most fans at the World Cup

Across Berlin this summer, billboards advertise Krombacher alcohol-free as part of a marketing blitz that includes the distribution of variety packs, free samples and various other promotions in 25 German cities. But the “isotonic” brand's slogan, “We refresh Germany,” has already attracted the ire of the regulators.

Earlier this month, a district court in North Rhine-Westphalia ruled that promoting Krombacher as “revitalizing” violates European Union regulations requiring such adjectives to be backed up by proof of specific health benefits.

Racking his brain while hoisting back a regular old bottle of Beck's at Bei Schlawinchen, Schumann says he can think of only one advantage.

“I guess people can drink it the day after they've really tied one on.”