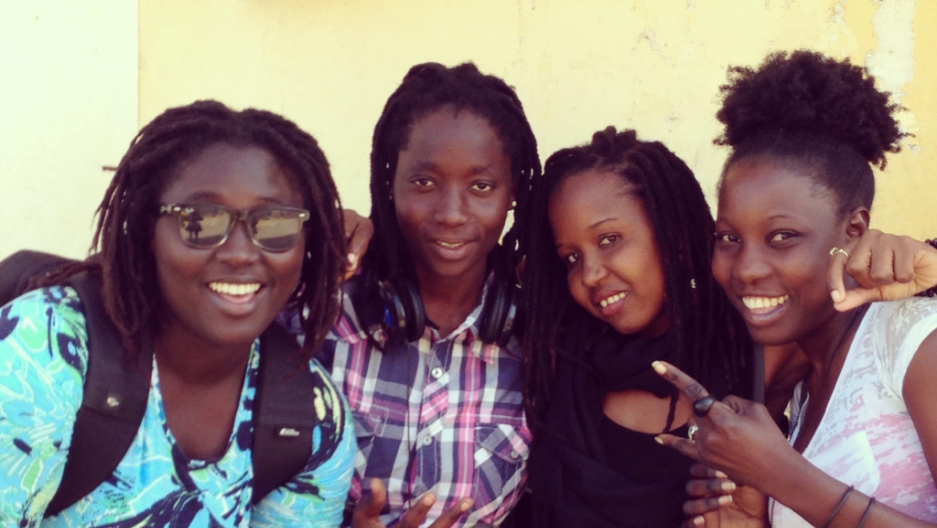 DAKAR, Senegal — On the dusty outskirts of Dakar, a young woman stepped onstage, wearing thick dreads and Ray Ban sunglasses. Toussa Senerap looked out at the crowd, mostly men. She began rapping and dancing out the beat with ease.

“I love you so much,” she sang in English, before switching to Wolof, the local language. “We are spending all our nights together, you and I. But we are not fiancées, and we are not married.”

The annual “Flow Up,” a rap competition hosted by Dakar’s Hip Hop Akademy, an alternative school for developing rappers, had never had a female contestant. But that day Toussa won a spot as one of the finalists, the crowd cheering and shouting their support, in spite of — or perhaps because of — the song’s bold lyrics.

Toussa freestyles on the streets of Dakar from GlobalPost on Vimeo.

Senegal’s current, massive male-dominated hip hop industry has been around since the 1980s. But rap has been here for hundreds of years.

Historians and ethnomusicologists trace the roots of rap back to West Africa’s "griots," or eloquent bards, who've been doing spoken word since at least the 14th century. The griot’s oral tales — part history, part commentary and part wit — were often accompanied by drums or other minimal instrumentation. This chanting style of song was later carried over from West Africa to the United States with the slave trade. Decades later, consciously or not, rap evolved from the griot tradition.

A great number of West African griots were women, but that hasn’t translated to modern-day rap. In the US, people are asking where all the female rappers are, and Senegal faces the same problem. Of the few women rapping in the country today, most focus their efforts on singing, a more acceptable musical career path for women.

The most famous Senegalese female rapper, Sister Fa, is actually based in Berlin. And while the Hip Hop Akademy works with dozens of rappers every day, only a handful are female.

“It’s cultural here in Senegal. The women don’t stay long in hip hop,” said Moustapha Sall, who runs the academy, a tall, thin man in a beanie and big sunglasses. “Because of the pressure of the families, when she gets married she leaves. Or because when you are in hip hop, people think you are a person who is just about violence, drugs and sex. If you are a girl, people think that.”

Toussa’s first single, which she released in 2006 at the age of 13, warned women in its lyrics that men often “don’t give you a lot of respect” — either in marriage, or in the rap industry.

Since then, she has gone on to perform in national competitions, tour Senegal and the eastern United States, and found an all-female hip hop collective, GOTAL, which means “unity” in Wolof.

Toussa interviewed at home from GlobalPost on Vimeo.

Some of 22-year-old Toussa’s songs are locally influenced, incorporating the sound of griots, Senegalese rap, or Senegalese pop, called "mbalax." Other songs, however, sound like close cousins of American rap. The first rap song Toussa heard, in fact, was American rapper 50 Cent’s “In Da Club,” which is what led her to seek out other music forms.

“It’s out of that that everything began,” she said later. “I wanted to listen to everything.”

Ali Colleen Neff, an ethnomusicologist at the College of William and Mary, said it is this combination of old and new that makes the music of female Senegalese rappers today so potent.

“They are drawing from Beyonce and Missy on one hand, and then their own indigenous women’s poetry on the other hand,” said Neff. “You put that together and it is super powerful.”

On a bright, hot morning in mid-March, four of the five members of Toussa’s hip hop collective, GOTAL, gathered to record one of the final songs of their first album, which will be out this summer. The women had just written and performed two songs about violence against women for International Women’s Day, but on this day, they were in the studio to record a song simply meant to entertain.

“The goal of my music is to talk about everything,” said Toussa, who was born Astou Gueye, but chose the stage name Toussa because it means “everything.” “When we need to divert people we divert them, and when we need to really get a message out to this generation we do it.”

Their lanky producer Kef Keffie, the only man in the room, stopped Toussa. “Don’t be Toussa the rapper,” he said. “Be Toussa the singer. You have to be a singer.”

Toussa began again, this time rapping even more rhythmically than she had before, and singing out a single line in English: “I’m not luck-yyy.” Kef wanted more feminine; Toussa gave him more heart.

Neff said she believes Toussa will last in a way other female rappers haven’t in Senegal because of her skill at negotiating situations like those. “From the time she was 18 she managed studio sessions with professional producers — even ones that are not professional — and no one has tried to transgress her,” said Neff. “She’s just dead serious with what she does and commands respect.”

A month after the recording session, Toussa sidestepped those problems entirely, announcing that she was opening her own recording studio, RockTeam Musik, run by women, for women. The studio would produce music but also hold workshops about the role of women in society and hip hop. “Life as a woman in the hip hop world is not very easy,” said Toussa, soberly. “We will work on that.”

Flock's reporting in Senegal was supported by a grant from GlobalBeat, an international reporting program at New York University.