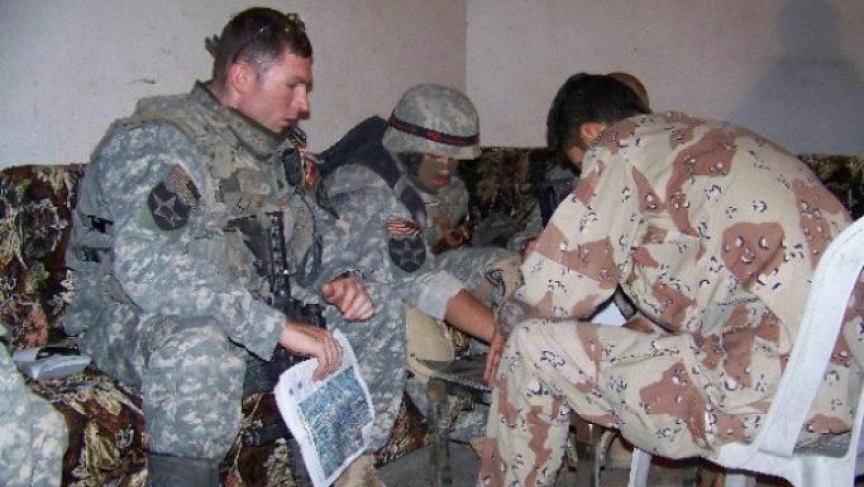 “I lost friends in Mosul. We lost Iraqi interpreters who fought with us in Mosul. To see all of the gains that we had established, and the opportunity for stability wiped away, is incredibly frustrating.”

Hall led a recon platoon and sniper unit in Iraq from July 2006 through September 2007. Those were some of the deadliest months of the Iraq war. He was part of 3rd Stryker Brigade based out of Fort Lewis in Washington state. He fought in Mosul, Baghdad and elsewhere.

Hall now runs a tech company in Washington, DC. “One of the dilemmas that combat veterans face is that no one can really understand your experience. Even if you’re able to articulate the trauma that you experienced and the sacrifice that you saw, you would still never quite get across the true reality of those experiences. That’s something all of us has to live with. It’s a bit isolating.”

“At the same time,” Hall adds, “I’ve kept current with the politics in Iraq and it’s a little bit frustrating to see the level of naivete that still exists within the public discourse. Some of the same talking heads who were wrong about Iraq from the beginning continue to shape the narrative about Iraq."

"And that’s really what’s put us in this situation where, after 13 years of warfare, not only is Iraq not a more stable place, it’s not [even] a place that’s in the best interests of American national security. [It’s] quite the opposite, where our arch-enemy al-Qaeda now has a safe haven.”

Technically speaking, the Islamic militants who now dominate northern and western Iraq, ISIS, have been disowned by al-Qaeda. But ISIS shares a similar anti-Western agenda.

“I don’t want to politicize it,” says Hall, “because I’m a soldier. But I think a lot of the folks who advocated for war — and most of them happen to be in the Bush administration — are still talking now about how the Obama administration has messed up the situation. But to me, I think it’s just been a consistent failure by both administrations throughout the course of our experience in Iraq."

"The only difference really is the order of magnitude, where I think the administration that started the war bears the majority of the blame. But we certainly never had a coherent strategy for Iraq, in my opinion. It’s tough to live with that on a day-to-day experience and not to have other people understand you.”

Reflecting on the current fears of sectarian warfare, Hall says it reminds him of Baghdad in 2007.

“I’ve never felt emotions like I felt when I was on combat patrols in Baghdad. Macabre is one way to describe it. There was just always an atmosphere of fear. We would see corpses by the side of the road and it felt like the city was dying. ... So when I think about Baghdad, what’s really concerning is that the city is now divided along pretty stark lines between Sunni and Shia. You might have some pockets where the Sunni are surrounded by the Shia."

"I just think it’s incredibly unfortunate because the average Iraqi family is going to be caught in the middle of all these forces. ... As these militants come closer and the Shia begin to radicalize and take up arms, those folks are at pretty high risk for being targeted as part of a genocide-type campaign.”

“It’s tough because you form relationships over there with families and so, now, to know that they’re at risk and that the country might be even more divided after this particular episode is just — it’s just heartbreaking.”