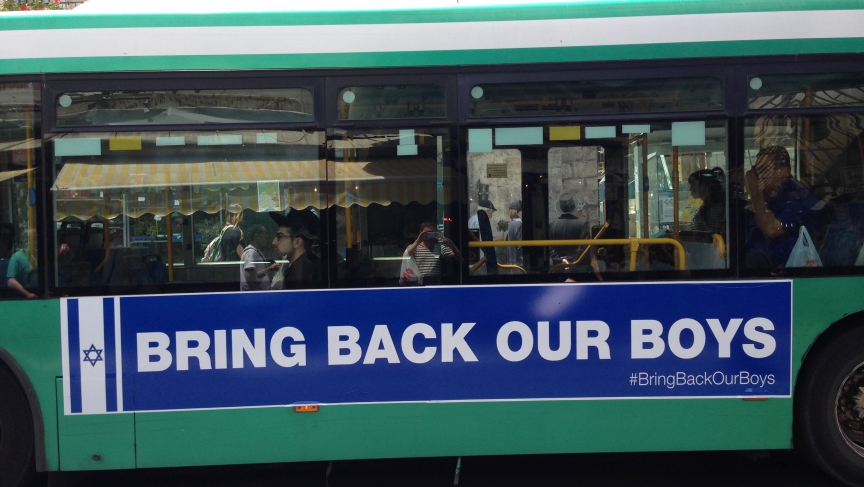 Iraq is dominating the headlines around the world, but there's a different crisis captivating Israelis – especially on social media.

Last week, three Israeli teenagers went missing on their way home from their Jewish religious school in the West Bank.

Israel says Hamas members kidnapped the teens, and it has unleashed its biggest offensive against Hamas in the West Bank in more than a decade. Two Palestinians, one 15 and one 20-years-old, were killed in clashes with soldiers, more than 300 Palestinians were arrested, and a number of Hamas affiliated sites were raided.

Even before local media reported that the Israeli teenagers were apparently abducted, the rumors were making the rounds. A dozen university student activists – leaders of pro-Israel student advocacy groups – started chatting on WhatsApp, brainstorming ideas for a campaign. When the news hit the Israeli media, they were ready to pounce.

“Within 32 minutes, we had all the Facebook, Twitter, Instagram, we had research guys going, we had graphics guys with things ready to be uploaded,” said Emily Neilson, a student organizer.

Their hashtag campaign: #BringBackOurBoys, inspired by the #BringBackOurGirls campaign to free the Nigerian schoolgirls kidnapped by Boko Haram.

“This isn’t about Nigerians or Israelis or something specific happened in Israel. This is about: terrorists are kidnapping kids,” said Neilson.

The #BringBackOurBoys campaign went viral. Matisyahu, the American Jewish reggae rapper, tweeted a selfie with the slogan. Thursday, Israel’s first lady Sara Netanyahu did the same – just like Michelle Obama did for the Nigerian girls.

Like most Internet memes, the slogan has taken on a life of its own.

Arab-Israeli teenager Mohammad Zoabi received threats from the Arab-Israeli community after he posted a YouTube video siding with Israel, instead of with the Palestinians, as the Arab community in Israel tends to do.

“To those terrorists, who have kidnapped our kids…bring them back, and you better bring them back now,” Zoabi said in English, Hebrew and Arabic.

Meanwhile, Palestinians have appropriated the #BringBackOurBoys slogan to call attention to Palestinian boys arrested by Israel, and some Palestinians are posting photos holding up three fingers – to support the capture of the three Israeli teens, in hopes that they can be traded for Palestinian prisoners in Israeli jails, like the prisoner exchange three years ago with captured Israeli soldier Gilad Shalit. A Palestinian song on YouTube celebrates the kidnapped teens as three “Shalits.”

A lot of the online content surrounding the ongoing crisis comes directly from the Israeli army’s social media headquarters. Forty young officers churn out infographics, blog posts and videos, 24/7, in a cluttered room full of cheeky, colorful posters – a cross between a college dorm and an advertising agency.

“We’re a bit of both, but at the end of the day we are military,” said Lt. Col. Peter Lerner, who heads the army’s social media unit. “We are about getting the message out. That’s what we convey.”

On a recent afternoon, two soldiers wrote English captions for a YouTube video of a nighttime raid at an office that broadcasts Hamas TV, while another soldier named Tamara typed up a Spanish language blog post about Hamas’ civilian institutions.

Some might call this unit a propaganda machine, but Tamara said it’s about fighting for public opinion.

“I believe there are two battlefields at this moment that the army is fighting. The first is the actual battlefield and the second is the Internet,” Tamar said. “It’s important for people to understand that it’s a war, that there are so many negative comments online, that we need to make sure that we have a presence. To make people understand that there is another side, and that our side is the correct one.”

Israeli leaders say the military offensive is just beginning. Just like the kidnapped Nigerian girls, the Israeli boys have yet to be found.