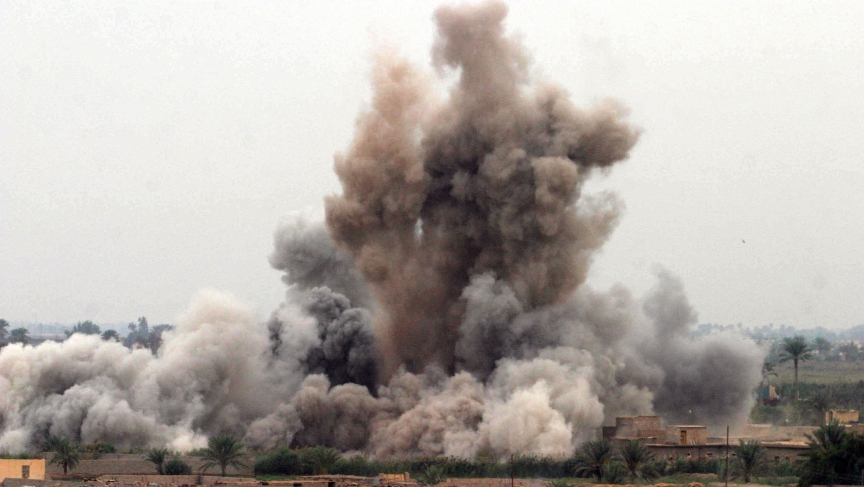 A US air strike on a suspected insurgent hideout in Fallujah in 2004. It's been more than 2 1/2 years since the US carried out air strikes in Iraq.

The Iraqi government formally requested US military assistance on Wednesday. President Obama last week said the crisis in Iraq affects vital US national interests, and he is consulting with Congress to discuss the possibility of intervention.

But if it happens, the White House has made clear that any intervention would not involve ‘boots on the ground.’

Anne-Marie Slaughter is a former director of policy planning at the State Department, and currently President of the think-tank, the New America Foundation.

In an opinion piece in the New York Times on Wednesday, she argues that the United States should go further. The piece is entitled "Don’t fight in Iraq and ignore Syria."

“I don’t understand why Iraq is a vital interest that would allow us to use force when Syria is not,” Slaughter told The World.

“Actually, what’s happening in Iraq is a direct result of what’s been happening in Syria,” argued Slaughter. “People have been predicting for over a year that ISIS would try to create their own state in eastern Syria and western Iraq. That’s now happening. But the root of that problem is in Syria, and yet in Syria he (Obama) says it’s not a vital interest, and so we shouldn’t use force.”

Slaughter argues that any US air campaign must attack ISIS inside Syria as well as inside Iraq. But she also argues that as part of that campaign, the United States should also attack the forces of Syrian president, Bashar al-Assad. ISIS is one of many rebel groups in Syria that is fighting to overthrow Assad.

Slaughter agrees that such an attack would complicate negotiations with Iran, which is a close ally of Assad. But she says the overwhelming priority is to help the ordinary people of Iraq and Syria.

Other foreign policy experts say the United States should not get involved in either country. Retired General David Petraeus - the architect of the surge in Iraq in 2007 - said Wednesday that the United States "should not become the air force of a Shia militia."