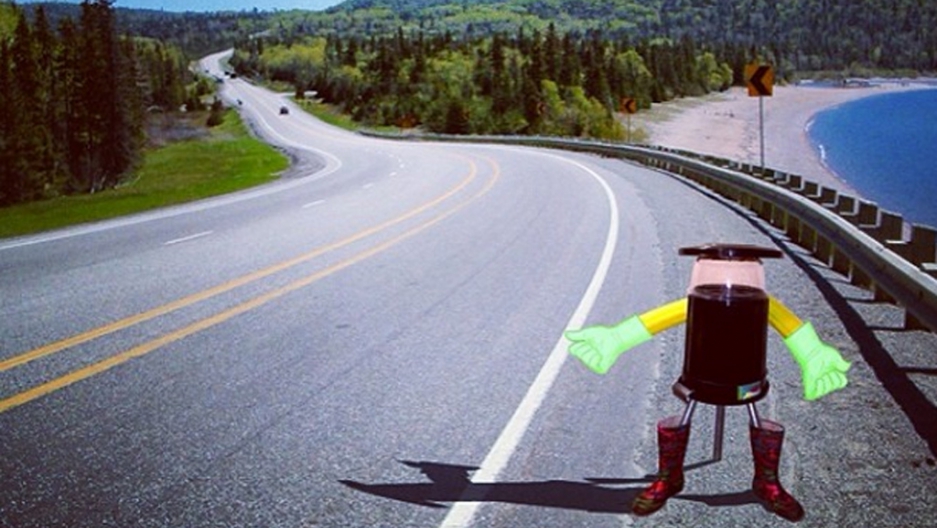 Hitchhikers come in all shapes and sizes.

But motorists traversing the Great White North this summer could cross paths with a talking robot trying to hitch a ride as part of an art project and social experiment.

About the size of a small child, this adorable little robot has been cobbled together with parts found at a yard sale, including a beer cooler bucket, foam pool noodles, garden gloves, rubber boots and even a cake saver.

Its mission is both parts art and science.

"We want to take the question that is normally asked — if we can and should trust robots — the other way around and ask: Can robots trust human beings?" David Smith, an assistant professor at Canada's McMaster University, told NBC News.

"We believe that through this artwork we can learn a lot also in terms of social robotics, how we approach robots (in the wild, i.e., in non-restricted, non-observed environments), and whether we interact with them and if yes, how."

Wondering why I'm hitchhiking? Robots cannot get driver's licenses - at least not yet. #hitchbot #robotrights

HitchBOT will begin its journey July 27 on the side of a road near The Institute for Applied Creativity at Nova Scotia College of Art and Design in Halifax.

It hopes to reach the Open Space Gallery in British Columbia, some 3,870 miles away.

Other that its hitchhiking arm, hitchBOT isn't able to move. But it can make small talk by answering questions with the help of Wikipedia and comes with a camera allowing it to detect motion, according to CBC News.

Anyone can pick up hitchBOT and charge its battery by plugging it into a cigarette lighter.

If successful, hitchBOT will join other non-human hitchhikers like Scoop the dog.