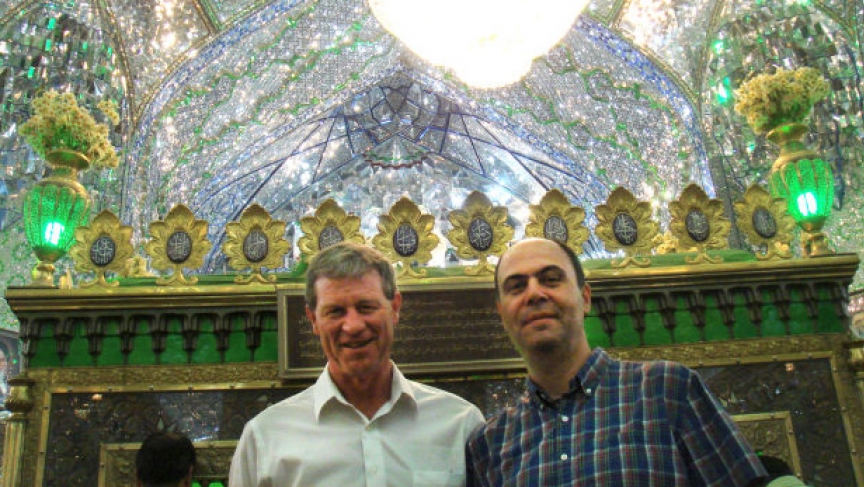 Jim Riddle in Iran with his sponsor and guide Reza Ardekani.

Jim Riddle was surprised when he got an email from Iran.

The Minnesota farmer, and former chairman of the US National Organic Standards Board, says he was invited to speak at the Second International Organic Agriculture conference in Tehran.

"The organizing committee was looking for a speaker knowledgeable about the United States organic regulation and organic markets and the situation here," he says.

Since Riddle had never been to Iran before, he says he wasn't sure if his trip would conflict with US sanctions against Iran. So he checked with the USDA and State Department and he says they told him about some cultural, sports and academic exchanges that are going on. "[It's] kind of like soft diplomacy," he says.

After Riddle got the green light from the State Department, he was on his way to Tehran. As you might imagine, his trip was met with some raised eyebrows from his friends.

"Some of them were like 'are you crazy? Why would you want to go there?"

But Riddle says he learned a lot from his trip to Iran.

"I thought it would be much more repressive and controlled," he says. "I also learned that Iran has over 3,000 certified organic farms already, producing organic products such as pistachios, pomegranates, grapes, figs, dates."

Riddle says now Iranians want to strengthen their access to the international organic market and focus on improving their local, domestic infrastructure. But Riddle also discovered it's difficult to find blueberries in Iran.

"Some people have heard of them, maybe some have tasted them, but it's not easy to find."

So he got a lot of questions about blueberries when he was there.

"Blueberries need a very acidic soil. In Iran, at least, most of the country has just the opposite," Riddle says.

"I saw very busy traffic, very busy markets, restaurants, bazaars. What I did not see was US products, except for Coca-Cola and some Pepsi. I just did not see any US automobiles and in some ways, the United States, we are the ones who are being hurt by these sanctions."

Who knows, maybe one day Iranian and Americans will be swapping recipes for blueberry pie and saffron rice pudding.