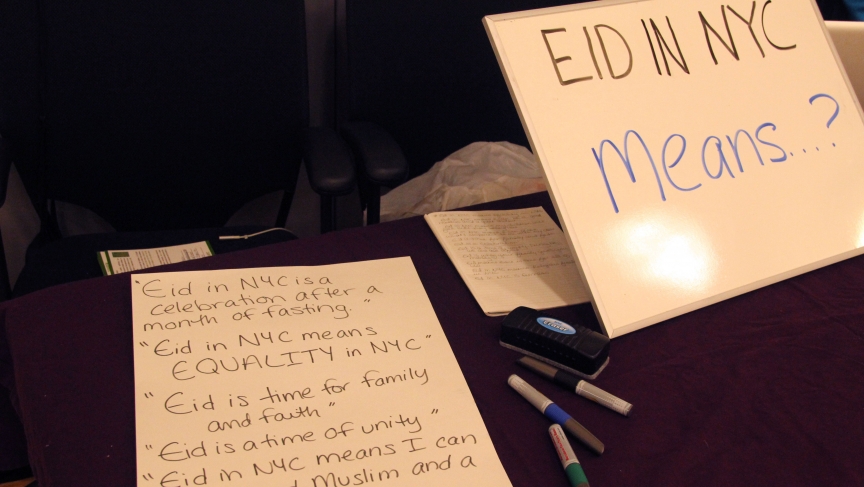 Thoughts on what Eid school holidays would mean for Muslim students, at a recent community meeting at the Islamic Cultural Center in Manhattan.

Muslim parents in the US typically face a choice — make their kids miss school or make them miss Islam's most important religious holidays.

The two biggest Muslim holidays are Eid al-Adha and Eid al-Fitr. Eid al-Adha marks the end of the annual pilgrimage to Mecca. Eid al-Fitr comes at the end of Ramadan, the month of fasting. Both are observed through prayer and time with family.

At least six school districts across the US have begun closing for the two holidays. New York City’s Muslims would like their public schools to be next. At a recent public meeting held by the group Coalition for Muslim School Holidays, elected officials and representatives from the office of recently-elected Mayor Bill de Blasio expressed their support.

But city officials haven’t always been so accommodating. New York City's former mayor, Michael Bloomberg, wasn't hearing of it — he said if he had his way, there would be fewer school holidays.

New York's current mayor, Bill de Blasio, has said he’s committed to adding the two Muslim holidays to the school calendar, though it will take some time.

New York City schools close for the Jewish holidays of Rosh Hashanah and Yom Kippur. Christmas falls during the winter recess and Easter and Passover during spring recess. So why not close for two Muslim holidays? A study from Columbia University estimates that 10 percent of New York City public school students are now Muslim.

The city’s Muslims say it’s time for them to be recognized, too. “I've been doing organizing work in the Muslim community for 12 years and this is one of first times ever that I’ve really seen a form of beautiful unity,” says Linda Sarsour, executive director of the Arab American Association of New York.

She says that New York’s Muslims have historically had difficulty mobilizing on issues, in part, because it’s such a diverse population. But they’ve found common ground fighting for school holidays, and Sarsour hopes this issue will help them organize on thornier ones, like surveillance of Muslims.

“People have fear that the more they organize around that issue, the more scrutiny they would get from law enforcement,” she says. “But we think that our work with the Coalition for Muslim School Holidays is really empowering more people to be like, ‘Wait a minute, we stood up together and we got these holidays. Maybe if we stand up together the New York Police Department, the FBI, the TSA, Customs and Border Patrol will stop racially profiling our community and we can help change legislation and things like that.'”

Adding a couple of days off school should be a less contentious battle. Still, not everyone supports it, even some Muslims. Farhan Memon, co-founder of the Muslim Bar Association of New York, says that the effort raises church-state separation issues and is just not fair for kids whose faiths don’t have a holiday.

“I understand why Muslim parents in New York want their children to be home for Eid, but we live in a pluralistic society, and everybody deserves the same rights as each other,” Memon says.

He also wonders where the holidays would stop. In fact, other groups are now asking for school holidays, too. New York’s large Chinese population is lobbying for a holiday to mark its New Year. Another group is pushing for a holiday for Diwali, an important festival in the Hindu, Sikh, and Jain calendars.