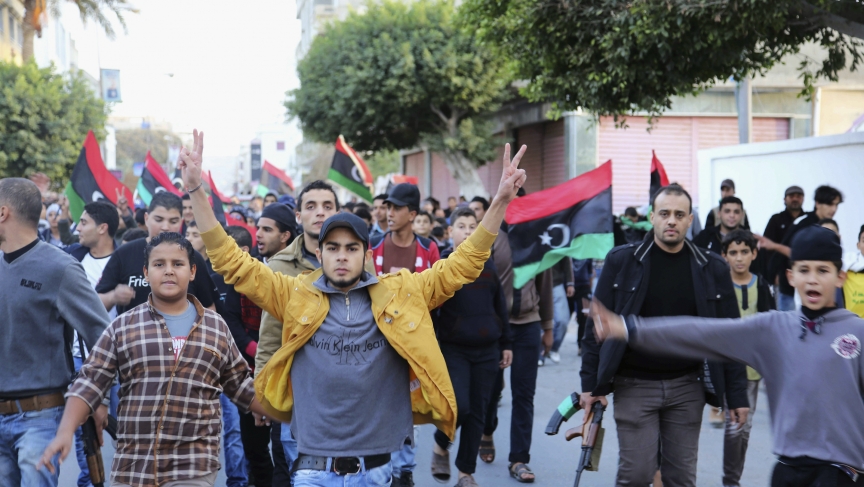 People demonstrate against the Islamist militant group Ansar al-Sharia and in support of the army and police along a street in Derna in December 2013.

It's not a regular, two-sided conflict

Like the Game of Thrones has many different houses, the crisis in Libya is a power struggle with multiple actors and alliances. "There are clans or tribes that control different parts of the territory and they are all pretty much trying to take over the throne and push their own interests," explains Hassan Morajea, a journalist and Game of Thrones fan. "They are all putting together their own armies. Obviously, that’s Libya’s militias. And you have tons of plots underway. Alliances keep shifting. You’ve got rumors of coups and counter-coups. It’s a mess."

The Mad King is the Mad Dog

Aerys II Targaryen, also called the Mad King, was assassinated before Season One of Game of Thrones begins. The parallel is with Muammar Gaddafi, who in 2011 was overthrown and killed by dissidents during the Arab Spring. The "Mad King" fits the reputation that Gaddafi had, cunning and ruthless. Oh, and Gaddafi's nickname? Mad Dog.

“The King can do as he likes! The Mad King did as he liked. Has your uncle Jaime ever told you what happened to him?”

Once the mad man dies, the kingdom falls apart

Just like with many of Game of Thrones' kings, Gaddafi had a bloody reputation and a bloody ending. Still, he held together Libya as Targaryen held together the seven kingdoms — and once he dies, everything falls apart. The death of Gaddafi in 2011 resulted in the collapse of the Jamahiriya state, in place for over 30 years prior. Although elections for a congress were held in 2012, the interim government is weak and competes with armed rebel groups.

Today's Libya is in Season Four

Marine Olivesi's says "Game of Thrones" is a useful way to think about the situation in Libya.

Just like in the Game of Thrones season that wrapped last night, Libya is in a post-revolution state.

Tripoli is the Red Castle

Tripoli, like Game of Thrones' King's Landing, is the capital. Both capitals have castles, and both are red.

In both Game of Thrones and Libya, whoever controls the capital — no matter what's going on elsewhere — controls the rest of the kingdom. Today, Tripoli is controlled by mainstream Islamists related to the Muslim Brotherhood, the most powerful political group in Libya's Parliament. The Muslim Brotherhood is backed by some of Libya's largest militias. The family that controls King's Landing in Game of Thrones are the Lanisters. Just like the Islamists in Libya, the Lanisters don't have much popular support, but they're very shrewd politically.

The Lannister Brotherhood can hold a grudge

In Game of Thrones, the Lanister's hometown is Casterly Rock (the parallel would be Misrata in Libya, a stronghold of the Muslim Brotherhood). And just like the Lannisters, the Misratis have a reputation for holding a grudge and always paying their debts. The analogy even goes further, says Morajea. The Lannisters are also very wealthy merchants, and Misrata prides itself on being Libya's business capital.

“Have you ever heard the phrase: 'Rich as a Lannister'? Of course you have, you’re a smart man. And of course, you have also heard the phrase, 'A Lanister always paid its debts!'”

Morajea compares Winterfell to Benghazi, and the Starks to the Libyan Army. Historically, the core of the Libyan Army has been in Benghazi. As in the TV show, the Stark family is seen as more honest and not so power-hungry compared to the other families. In Libya, today, you clearly have scores of people who say they want an army, not militias. Because militias want the power for themselves. The army is just trying to do what’s right, but the problem is: they’re not very powerful. In Season Four, Winterfell is occupied and its forces are in shambles. You can say the same for Benghazi and the Libyan army at this point, says Morajea.

Winterfell is the last kingdom before the Wall, which marks the frontier between two worlds: the civilized world and the savage world. If you go north of the wall, there is no rule of law, mercy, or safety. If the Wall is North in Game of Thrones, in Libya, the Wall is east. Beyond the wall in Libya is Derna, a city further east than Benghazi. Derna is a stronghold for Ansar al-Sharia, a radical Islamist organization affiliated with al-Qaeda, thought to be responsible for assassinations and car bombs aimed at the Libyan army.

Ansar al Sharia would represent the “wildlings” in Game of Thrones: Savage, ruthless, what would be described today as terrorists. The wildlings want to destroy everything, and there's a constant threat that they are going to try to break through the wall. We've seen that happening in Libya, says Morajea, with Ansar al Sharia organizing repeated incursions in Benghazi.

Who is the Night's Watch of Libya's Eastern Wall?

That would be Libya’s special forces, the Saeqa. Like the Night’s Watch, they have no ties to anyone. Their job is to protect the country, but at this point in the series they can hardly contain the wildlings — the Ansar al Sharia militants.

“Tonight we fight. And when the sun rises, I promise you, Castle Black will stand. The Night’s Watch will stand. With me now! Now with me!”

While the Night's Watch are desparately trying to hold the fort, a retired general, Khalifa Hiftar, decided to go on the offensive against radical Islamists in Benghazi. The army in Benghazi is spearheading the fight with the help of other cities like Zintan, a town in western Libya that has a very powerful militia. In The Game of Thrones' world, the Zintanis would be the Martel. Like in the show, the Zintanis (the Martel) have a lot of hate for the Misratans (the Lannisters). Thus, there’s a common interest between the Martel and Winterfel in defeating the Lannisters. This is replicated in Libya with the Zintanis and the Army wanting to defeat the Islamists.

What other parallels between Libya and Game of Thrones are we missing? Leave your comments below.