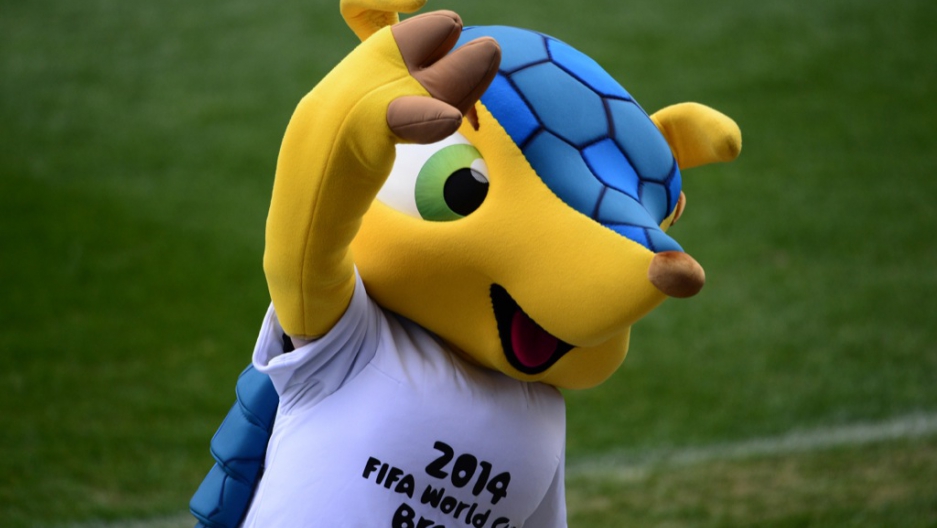 Fuleco, the World Cup 2014 mascot, is a little bit armadillo and a whole lot of branding.
Credit: JAVIER SORIANO
Share

LIMA, Peru — When they unveiled Fuleco nearly two years ago, organizers of the 2014 World Cup vowed the official mascot would help green the planet’s most popular sporting event.

The garish blue and yellow talisman, which is already omnipresent at the month-long soccer fest that kicked off in Sao Paulo on Thursday, is supposed to be a three-banded armadillo, known as the “tatu-bola” in Brazil, the only country where it exists.

Officially classed as “vulnerable” to extinction — but due to be reclassified to the more urgent “endangered” next year — the species has seen half its natural habitat in the Caatinga, a vast tropical dry forest in the Brazilian northwest, chopped down over the last 15 years. Meanwhile, many poor locals still illegally poach the tatu-bola for its meat.

FIFA, world soccer’s governing body, saw an opportunity to put a positive spin on those grim trends. Fuleco’s name, voted on by thousands of fans, is even meant to be a hybrid of “futebol” and “ecologia,” two Portuguese words that need no translation.

“The fact that the three-banded armadillo is a vulnerable species is very fitting,” Jerome Valcke, Secretary General of FIFA, said at the mascot’s official inauguration. “One of the key objectives through the 2014 FIFA World Cup is to use the event as a platform to communicate the importance of the environment and ecology.”

Environmentalists, too, hoped Fuleco would bring more attention to the plight of the endangered species.

But now, as millions around the world tune in to watch the ultimate soccer tournament, critics are claiming that FIFA’s sweet rhetoric on the environment is nothing more than crass corporate greenwashing, and that the organization is doing zip to save the unfortunate armadillo.

“It is not ethical,” says Rodrigo Castro, of Brazilian environmental group the Caatinga Association, whose campaigning was responsible for FIFA choosing the tatu-bola as the tournament mascot over 46 other proposals.

“You cannot exploit the image of an animal that is nearing extinction to make millions and then give nothing back.”

Castro says that a 10-year plan to save the armadillo would cost $12 million, and he had hoped that FIFA would contribute around 15 percent of that amount.

But although Continental Tire, one of the official sponsors of this year’s World Cup, has donated $45,000 toward the Caatinga Association’s tatu-bola project, FIFA has refused to give a single cent to any organization working to save the armadillo.

That comes despite expectations that FIFA will make millions from sales of tatu-bola stuffed animals, which retail for $14.99, and other Fuleco merchandise.

In an email, FIFA told GlobalPost that “time constraints” meant no official was available for an interview. However, the organization did claim a long list of environmental achievements for the 2014 World Cup.

Those included waste recycling, offsetting the tournament’s carbon emissions and offering spectators the chance to offset theirs for free, including for their flights to Brazil, and, of course, using Fuleco to “play a key role in driving environmental awareness.”

But the organization also admitted that it does “not have any direct relationship” with any group working to save the tatu-bola.

Overall, FIFA’s revenue for the 2014 World Cup is widely predicted to outstrip the $2.4 billion the Switzerland-based nonprofit, which is not accountable to any national government, made from the 2010 tournament in South Africa.

Meanwhile, Brazilian taxpayers provided the $11 billion needed to upgrade soccer stadiums and infrastructure for the World Cup, a fact that has enraged millions in a country where nearly 16 percent of the population, some 32 million people, still live in poverty.

More from GlobalPost: Here’s why some Brazilians want their country to lose the World Cup

FIFA even found a spare $25 million to blow on a film about itself in which Sepp Blatter, its controversial 78-year-old president, is played by Reservoir Dogs and Pulp Ficton star Tim Roth.

That was money that could have been spent on football projects for youngsters in some of the world’s grittiest slums — or on saving the tatu-bola.

Meanwhile, experts are ridiculing many of FIFA's other claims of environmental achievements.

Chris Gaffney, a Rio-based US academic who studies the impact of major sporting events, says the 2014 World Cup could have been organized at a fraction of the environmental and financial cost, including by making do with existing stadiums.

He even questioned the LEED environmental certification that the 12 host stadiums are receiving for supposedly being energy and water efficient.

“It's basically a marketing tool because no one is accounting for the environmental costs of destroying existing stadiums and then rebuilding them. The same people that paid for the original stadium [Brazilian taxpayers] are being billed to demolish them and then build new ones.”

Gaffney also questioned FIFA’s use of carbon offsets rather than actually reducing its own greenhouse gas emissions, which the organization has calculated at 2.7 million tons of carbon dioxide (page 15) for the 2014 World Cup.

With offsets, individuals or organizations can pay to fund projects — such as forest conservation or renewable energy — that, in theory, compensate for the greenhouse gas emissions they trigger from air or road travel, heating, air conditioning or other causes.

“It is like indulgences from the church in the Middle Ages,” Gaffney said. “FIFA flies people around the world, drives them around in limousines, does nothing to reduce its emissions, then buys carbon credits. It is greenwashing.”

Andre Guerra, of Friends of the Earth Brazil, agreed: “When FIFA says the World Cup is green or sustainable, I would ask green and sustainable for whom?”

“What is the impact for a family that has to leave its home to make way for a boulevard that leads to a World Cup stadium? Is it possible to measure the disrespect, humiliation and violence for the poorest sections of society when they are in the way of such mega events?”

As for Fuleco, he has not even raised awareness of the tatu-bola’s dire straits in the wild, says Flavia Miranda, a Brazilian biologist and deputy chairwoman of the group of experts that is recategorizing the tatu-bola as endangered.

That is partly because the mascot’s official World Cup publicity barely mentions the danger the creature is in. Not to mention, the mascot looks as much like a squirrel or racoon as it does a real armadillo.

“I don’t see any benefit from this use because we are not talking about the real tatu-bola,” Miranda said. “Many people think that the species is an insect that we have here in Brazil.”

“We are, in fact, talking about a living fossil that will cease to exist soon if it we don’t have funds to invest in a conservation program. The cup could have had that legacy.”