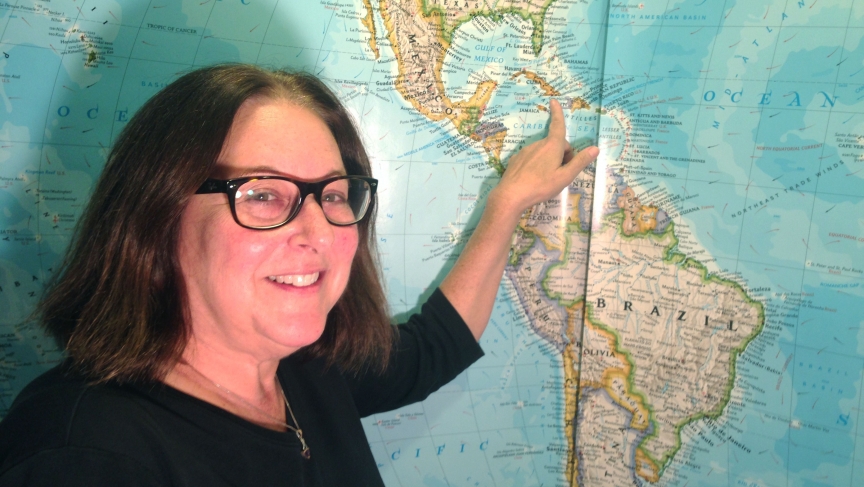 Carol Rosenberg joined us in The World's studios.

Carol Rosenberg has covered the detention camps at Guantanamo Bay for the Miami Herald since 2001. She joined us in our newsroom in Boston this week to talk about a story she has spent more than a decade covering and that she says may be the last story she ever covers.

Here are nine things we learned from Rosenberg's 13 years of work.

In 2002, the Bush administration was overwhelmed with prisoners in Afghanistan, says Rosenberg. So they decided to move prisoners 8,000 miles to their base on the coast of Cuba. "They thought at this time, probably against all reason, that it would be out of the reach of the US courts." Rosenberg says the US was motivated to find a place that was "lawless."

The first 20 detainees in Guantanamo included an Australian, Yemenis and Afghan men. It was the months after Sept. 11, and "they thought this was going to be, among other things, an intelligence site for doing interrogations. They were fairly desparate to determine if there were sleeper cells out there, planning attacks on US targets."

When he took office, President Barack Obama was clear with his intention to close Guantanamo Bay. Six years later, the detention center remains open. Rosenberg describes Obama's approach to Guantanamo detainees at the start of his presidency: "He thought he would take a look at the detainees, and either try them or let them go."

But quickly, Rosenberg says, Obama discovered that a "third category" of detainees emerged: Indefinite detainees. And because Congress blocked Obama from moving this category of detainees into the United States, the president was forced to live with the current system.

"Most people misunderstand the goal of closing Guantanamo as letting all those detainees go, unless they're convicted," Rosenberg says. "Their plan is, still to this day, to win Congressional approval to empty the detention centers at Guantanamo ... but to hold people in Guantanamo-like detention here in the US."

In many ways, the five men swapped for Sgt. Bowe Bergdahl in May weren't typical Guantanamo detainees, says Rosenberg. These five men didn't fight with guards, followed the rules and lived together in communal detention. The so-called "cooperative captives" were allowed recreation time together and lived together in bunk houses. "These guys were more like war prisoners than many people at Guantanamo," says Rosenberg. "They were waiting for what happened, which was the deal that would release them as war prisoners."

There are 149 detainees currently in Guantanamo. Of this number, six are actively on trial, and 78 are cleared for release. These prisoners are free to return home — yet have not left because the US government does not trust the detainees' governments to rehabilitate them. The United States is waiting to release these 78 detainees "to circumstances that are rehabilitational."

Guantanamo is comprised of an airstrip, detention center, Navy base and town. The town supports sailors, administrators, and the 2,200 Pentagon employees that staff the prison. It's a little town — 45 square miles, says Rosenberg. It has a McDonald's, a church, a golf course and even an elementary school. "Sailors come with their cars, pets, kids and households, and move into suburban style housing."

The 17.4-mile fence line that borders Cuba proper is topped with barbed wire. Unlike in A Few Good Men, where there are hundreds of Marines that guard the fence line, Rosenberg says cameras and motion detectors do most of the work. Today, fewer than 150 Marines actively guard the fence.

Rosenberg has never been able to talk to detainees

Through her 13 years of reporting in Guantanamo, Rosenberg has never been allowed to talk to detainees. "I've spent years looking at these men through the wire — trying to write their stories," says Rosenberg. The detainees are sometimes told that their cases are being covered by the media, but seldom get access to the coverage themselves. Yet Rosenberg says that often after detainees are released, they will try to get in touch with her. "They basically say, 'Thank you for telling my story.'"

Guantanamo "might be the last story I will ever cover."

One of Rosenberg's greatest fears is that Guantanamo will continue to be a story even after she retires. Covering the detention center started as an assignment, but morphed into an obligation when coverage waned and other reporters disappeared. "Other people didn't want to see it, didn't want to cover it."

Now, covering Guantanamo is both satisfying and frustrating. Rosenberg likes the feeling of asking questions that the American people want asked, but fears the detention center will stay open for another 20 years and past her retirement as a reporter. "I sort of concluded a couple of years ago that this might be the last story I will ever cover."