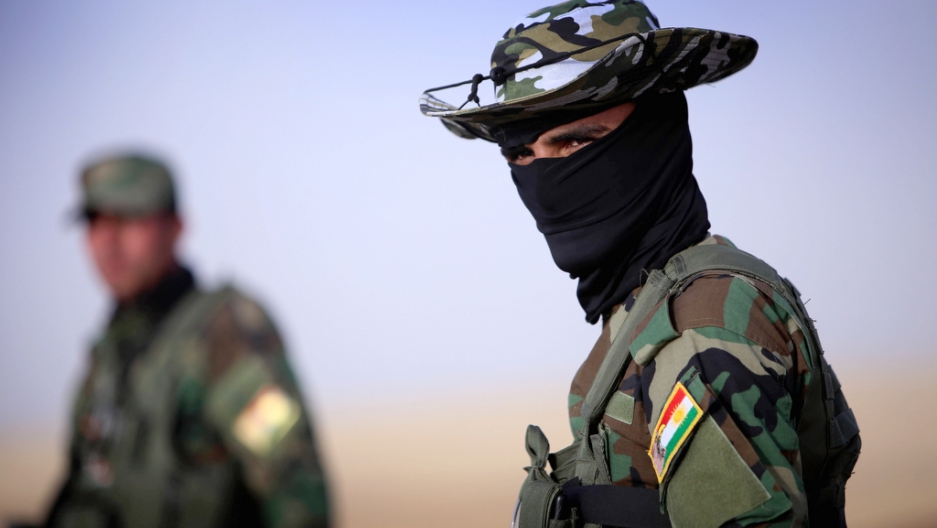 An Iraqi Kurdish soldier stands guard as Iraqi families fleeing violence in the northern Nineveh province gather at a Kurdish checkpoint in Aski Kalak, 25 miles west of Arbil, in the autonomous Kurdistan region, on June 11, 2014.
Share

The Islamic State of Iraq and the Levant, the radical Al Qaeda offshoot storming toward the Iraqi capital of Baghdad right now, is terrifying.

ISIL insurgents have carried out mass executions, random killings, public crucifixions, amputations and beheadings across Syria and Iraq where it wants to establish a Sunni Islamic caliphate governed under strict Sharia law.

Background about ISIL from GlobalPost: Where ISIL, the jihadist group that is seizing Iraq, came from and what it wants

ISIL is considered so extreme that core Al Qaeda moved to distance itself from it earlier this year, suggesting the group is too violent. Seriously. Iraq's security forces know: ISIL's attack on the Iraqi city of Mosul this week prompted the US-trained Iraqi soldiers to strip off their uniforms in the street and run for their lives.

Here are just some examples of ISIL's brutality.

Be warned: the images and videos are disturbing.

(Raqqa is Being Slaughtered Silently/Twitter)

Members of ISIL have hung on crosses the bodies of executed rebel and government fighters in a number of cities under its control in northern Syria.

#ISIS summarily executed and crucified 2 Syrians in Minbj for being soldiers with the government army. pic.twitter.com/yunLdv8i4S

ISIL, which imposes its own brand of Islamic law in the territories under its control in northern Syria and northwestern Iraq, uses barbaric methods to punish accused criminals.

More from GlobalPost: How the US helped turn Iraq into an Al Qaeda haven in just 53 steps

This video posted on YouTube claims to show two men in Syria being flogged by a member of ISIL after they missed Friday prayers.

Beheadings are also common. These images published by TIME in September show a man, said to be an ISIL fighter, beheading a young Syrian in front of hundreds of people in a small town near Aleppo. It's not clear what crime he committed.

Earlier this year, the apparently social media-savvy extremist group live-tweeted the amputation of a man's hand in the northern Syrian town of Maskanah. ISIL accused the man of stealing. Twitter has since suspended the account that posted the shocking photos.

ISIL has carried out numerous mass executions like the one pictured above.

In March, the UN's Human Rights Council accused ISIL of war crimes after its fighters killed an unknown number of prisoners. ISIL has also been accused of indiscriminate and brutal killings of civilians.

Earlier this month, ISIL fighters killed a 102-year-old man and his entire family in Syria. Some of the victims were burned alive while others were killed in their sleep, Agence France-Presse reported, citing the Syrian Observatory for Human Rights.

Their crime? They were Alawites, the same offshoot of Shiite Islam as Syrian President Bashar al-Assad.

This shocking video claims to shows ISIL fighters on a shooting rampage in Iraq.

Human rights groups say abductions, arbitrary detentions and torture are all strategies used by ISIL militants. The victims include people suspected of simple crimes like theft and drinking alcohol.

Former detainees in northern Syria told Amnesty International they were held in "grossly inhumane conditions," frequently flogged with generator belts and thick pieces of cable, tortured with electric shocks and had their bodies bound in excruciatingly painful poses.

Often detainees are given summary trials that sometimes last barely a minute before being taken away and killed.

This week ISIL abducted 49 members of the Turkish consulate in Mosul, bringing to 80 the number of Turkish citizens in the group's custody.

So this is what Iraq is now up against. Time to put together a new Coalition of the Willing?

More from GlobalPost: What the Iraq mess means for oil