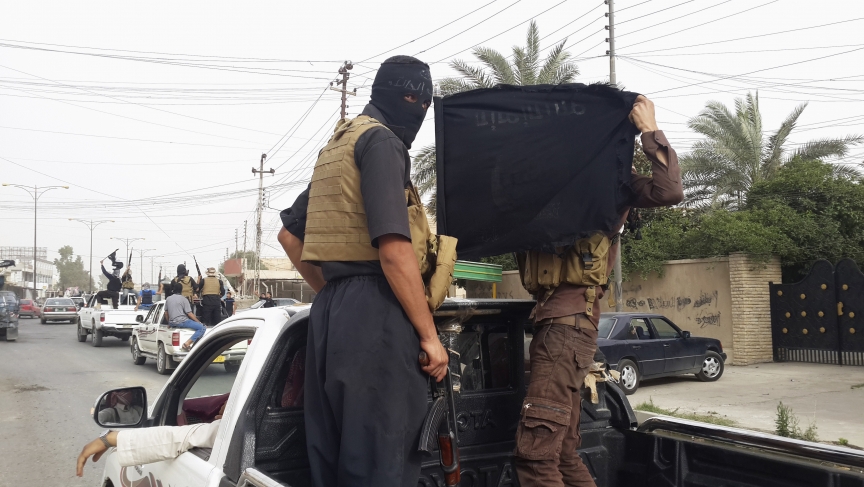 Fighters of the Islamic State of Iraq and Syria celebrate on vehicles taken from Iraqi security forces, at a street in city of Mosul, June 12, 2014.

President Barack Obama said today that he's considering a range of options to help the Iraqi government defend itself.

He said that includes military options, but not ground troops. He made it clear that U-S help is contingent on Iraqi leaders addressing some of their long-standing political problems.

"We're not going to allow ourselves to be dragged back into a situation in which, while we're there we're keeping a lid on things, and after enormous sacrifices by us, as soon as we're not there, suddenly people start acting in ways that are not conducive to the long-term stability and prosperity of the country," he said.

The president's words today echoed a feeling that many American war veterans have been voicing lately as parts of Iraq that US troops once fought and died to defend have fallen to insurgents.

The World reached out to our community of veterans and received thoughtful responses to the latest developments.

It's heart-breaking how many of us had to die to get that country going in the right direction for them to just roll over and retreat every time the ISIS show up. We absolutely should not go back, though. We gave them the map and compass, but they got themselves lost in the woods.

Personally, I felt that this was inevitable. The people over there seemed like they did not want to change. The war and the objectives were doomed from the start. The Iraqi army was corrupt to the core, and lacking leadership how is the Iraqi Army supposed to protect the country?  The only way I feel to fix this is with international support, that's something we should have gotten before we went over there. Allow the country to go through their revolution organically

Yes, I am an Iraq war vet.  The news is still soaking in.  I've heard from other vets that they figured it would happen. Others said that they were never in favor of the war in the first place. Many really suffered when Fallujah fell earlier this year, it hit home to those who lost so much, and reflecting on it, they, we, I, often ask, for what? It wasn't up to us to make the political discussions or gains, it was up to us to accomplish the missions. Which we did, but somewhere along the line someone failed, either our politicians, their politicians or the Iraqi people. It was hard to let go of the Iraq war when it ended a few years back, and it is harder to hear that we are losing what we were there to do.

Moya, a former Marine sergeant who helped lead the charge into Iraq back in 2003, says his mind goes back there now and again. He was 19 at the time. And his superiors were telling him and his peers they were there to liberate the people of Iraq. They were making history. "So it did feel as though we were actually doing something very important there," he says.

Moya says when he think about Iraq, a lot of emotion comes back. His fellow Marines died. And when the war ended in 2011, he says it was hard to let go. "It was kind of a bad relationship that you kind of want to stay in, but you kind of know that it needs to end," he says. "And it hurts either way, whether you stay or let it go."

We asked Moya what he thinks the American responsibility is at this point. He had trouble answering. He says it's a double-edged sword. If the US goes back, according to Moya, what responsibility do we have to the men and women who are returning? And if we let it go, we're letting go of the sacrifices of the veterans that were there prior to the current fighting.

"I think our responsibility would be to make sure that no regime like Saddam Hussein's regime or anything similar goes into power," he says. "But I definitely don't think that we should send boots to the ground and start winning the hearts and minds again."