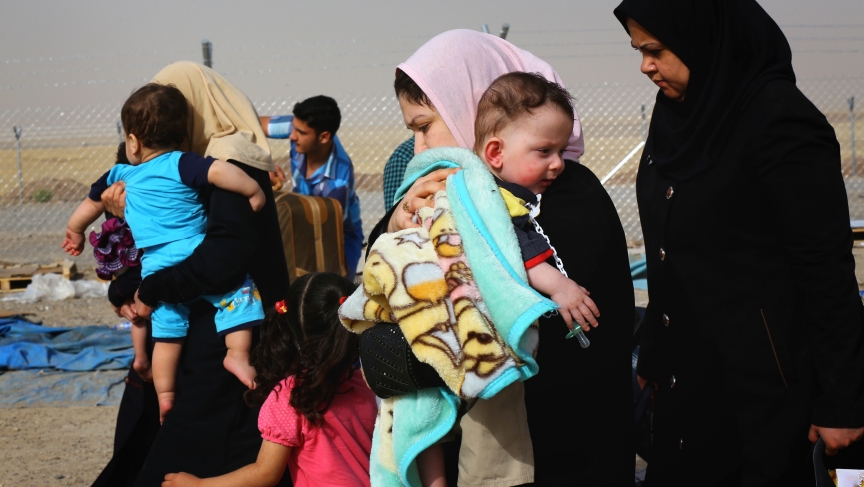 Families fleeing the violence in the Iraqi city of Mosul arrive at a checkpoint on the outskirts of Arbil.

Just take a look at the northern city of Mosul, which was overrun by jihadi militants on Tuesday.

On the ground, the city has long been divided by Kurdish security forces and Iraqi government patrols. Correspondent Jane Arraf, who reports from Iraq for Al Jazeera America and the Christian Science Monitor, calls it a microcosm of Iraq's competing interests. Arraf spoke today to people who were fleeing from Mosul and found an array of reactions.

"Some of them said this wasn't necessarily a bad thing. That yes, these (jihadi) fighters had taken over, but one of them actually said the streets are clean now, we have water again, we didn't have water before," Arraf reports. "But of course there are a lot of people who are terrified."

Arraf says Mosul residents told her that some extremists gave locals assurances that they would not be harmed. And she says considerable numbers of Mosul residents who fled in recent days have returned.

"Families are actually going back to Mosul. They left for a couple of days, they called back to see what was happening, and when they were told it was relatively quiet and people weren't being slaughtered in the streets — yet anyway — they started to go back," Arraf says.

Still, fighting continues to spread across much of Iraq, and escalating tensions led President Barack Obama to declare today that the US is ready to send additional help to Iraq. But Arraf says none of the Mosul resident she talked to were calling for more US involvement.

"There was a time a few years ago when the US would have been seen as the answer to everything. Now it's pretty much — apart from the Iraqi government officials, and Kurdish officials — by ordinary people, the US is seen as the answer to pretty much nothing," Arraf says. "They don't want US involvement. US involvement to most people here has led to nothing but grief."