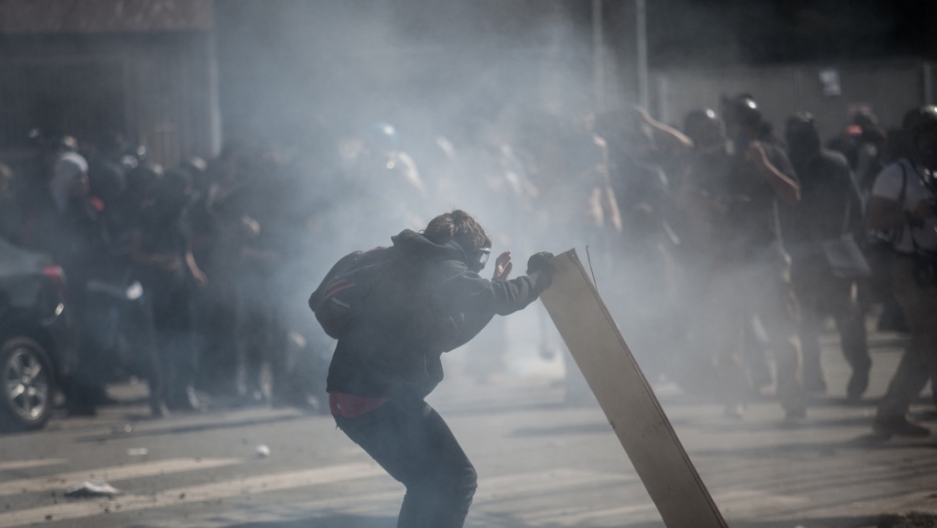 Protesters clashed with riot police in Brazil on the first day of the 2014 World Cup.
Credit: Victor Moriyama
Share

SAO PAULO, Brazil — On Thursday morning, while the world’s eyes were focused on the Arena de Sao Paulo, where Brazil would later beat Croatia in the opening game of the World Cup, a few kilometers away protesters were locked in street battles with platoons of riot police.

The protests were the latest manifestation of a movement that has been building for a year: Brazilians angry about government waste and spending on the World Cup have been in the streets since last June, when Brazil saw its biggest demonstrations in decades.

The police fired stun grenades and tear gas into the crowd of mostly young militant protesters, pushing them from neighborhood to neighborhood and leaving a trail of injuries and chaos in their wake.

This GlobalPost reporter found himself in the thick of things. It was a wild scene. Here are six of the craziest things that happened:

1. A CNN journalist was hit by a tear gas canister fired by police

I was probably 20 or 30 feet away from CNN producer Barbara Arvanitidis when she was hit by a tear gas canister fired by police this morning. A stun grenade fired at the same time landed a couple of feet away from me and deafened me for a few minutes.

What was so extraordinary about the sudden attack by police was that it was entirely unprovoked. At the time, there were perhaps five protesters goading police and an absolute army of journalists and photographers. Probably a couple dozen other protesters milled around, doing nothing provocative.

The “protest” had actually become a bit embarrassing as photographers jostled for a view of the few angry activists. Then the stun grenades hit, sending reporters and photographers sprinting in all directions.

A few minutes after this police action, things really started to get violent.

2. Protesters lit a massive trash fire in front of a gas station

The sudden, unexplained show of force by the police seemed to galvanize the protesters, who moved a few blocks west — just off the East Radial, the main road leading to the stadium — and merged alongside a larger group of about 300 peaceful protesters. The peaceful protest, organized by a labor union, mostly consisted of middle-aged workers.

Within 30 minutes, the crowd had swelled to about 500 people and become much more aggressive. The de facto uniform of the most militant protesters — black clothing, helmets, gas masks, piercings and partially shaved heads — was prevalent in the crowd. The protesters, who identify with the Black Bloc movement, seemed to grow more angry as the minutes progressed.

A crossroads in the Tatuape neighborhood quickly became the nucleus of the protests, and things started getting ugly when one young man ripped open a large bag of trash and began spilling it in the middle of the street.

Protesters then spread out in all directions, returning with more bags of garbage, which they added to the pile. Soon, someone had set the “barricade” alight, a few feet from a gas station which workers had chained off minutes before.

They are now making a barricade from trash, which they are setting on fire #WorldCup #protests pic.twitter.com/SC85yTy71H

Next, a street sign was added to the pile, along with a traffic cone and other jetsam. Playing to the army of cameras, the young protesters began goading the police, who had stationed themselves about a block away.

Within a couple of minutes of the fire being lit, the riot police were marching forward, shields raised, toward the protesters.

Right away, tear gas canisters began landing at the feet of the protesters, many of whom were wearing protective masks, helmets and flak jackets. Overhead, stun grenades exploded, sending shock waves across the crowd. Undeterred, the most well-protected protesters threw garbage bags on top of the gas canisters, quenching them, and kicked others back toward the police.

More from GlobalPost: 19 amazing things that happened at the World Cup opening ceremony

4. At least a dozen people were injured

It wasn’t just journalists getting hurt. Renata Maffezoli, a press assistant for the National Union of Teachers of Higher Education Institutions, said at least 11 protesters were injured and treated at the union offices, right at the center of the protests.

Maffezoli said the police stormed into the group of peaceful protesters her union had organized — a group that was not affiliated with, nor particularly supportive of, the younger crowd of militants.

“Today, it was really clear that the police have been using force in a very non-democratic way,” she said.

Among the throng of protesters were several other injured people. 28-year-old Rafael Lusvarghi strode through the crowd bare-chested, showing off two wounds from rubber bullets fired by police. Lusvarghi, a student, had been arrested by police earlier.

“This is what a man should do — fight for rights, fight for people,” he said. “We have a too-corrupt government, on too many levels, wasting public and private money on this World Cup.”

This is Rafael Lusvarghi who was shot w rubber bullets #WorldCup pic.twitter.com/xyfhTFNEVv

Once the tear gas started flying, photographer Jaqueline Gomez and I retreated. Without gas masks, it was impossible and dangerous to stay right in the thick of the fight between the protesters and the police.

Even from a block away, however, one wasn’t safe.

About an hour into the riot, we were watching alongside a group of motorcycle cops and a few other journalists and protesters keeping their distance, when the riot police inexplicably began firing tear gas canisters up the street at us, away from the protesters.

The only “tactic” employed by the riot police appeared to be continually moving protesters from neighborhood to neighborhood.

The result was chaos.

As the protesters moved from street to street, they overturned trash cans and set them on fire. Leafy squares that were idyllic one moment — where men had sat drinking beer and kids honked celebratory horns at passing cars — were instantly transformed into running battles as the procession of protesters and then police stormed through.

By 3 p.m., the protesters were hemmed inside a nearby subway station. As the riot police gathered outside and an unsuspecting sea of yellow-shirted soccer fans flowed past, the protesters began to chant: “No to the World Cup, use the money for education and healthcare!”

More from GlobalPost: Meet the anarchists who plan to go nuts at the World Cup