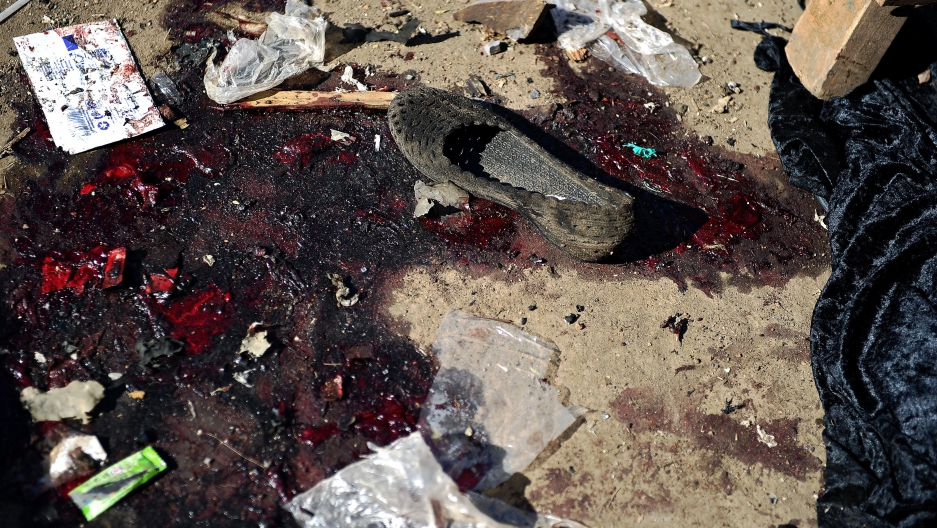 A shoe and debris at the scene of an explosion on May 16 on the outskirts of Nairobi's business district. Ten people were killed and over 70 wounded.
Credit: John Muchucha
Share

NAIROBI, Kenya — Terrorist attacks in Kenya are on the rise, triggering travel warnings from foreign governments and scaring ordinary Kenyans. Islamic militants from neighboring Somalia are blamed for most of the attacks and in response the government here is cracking down on ethnic Somalis, hoping to halt the escalation. But Al Shabaab has grown and evolved in recent years: Now it looks like the threat may come from within.

Though the attack on the Westgate Mall last fall is the driver of Kenya’s current anti-terrorism campaign, the country knows terrorism well. From the 1998 bombing of the US embassy in Nairobi onward, terrorist attacks by Al Qaeda and its affiliates have occurred regularly, if not often.

Most of the acts of terrorism that followed were low-level and ineffective in their aim of shaking Kenya’s resolve to keep its soldiers in Somalia. Attacks in the poor and neglected northeast were ignored, and when terrorists tossed grenades into late-night bars or dropped bombs at bus stops in Nairobi or Mombasa, the handful of civilians killed caused the government little concern.

Westgate was different. At least 67 people died in the initial assault and subsequent security operation at an upmarket mall in the heart of the capital. Among the dead was a nephew of President Uhuru Kenyatta.

Al Shabaab justified Westgate as retaliation for Kenyan attacks in Somalia. The threats have continued since.

People light candles outside the Westgate Mall on in Nairobi, eight days after the attack that left 67 dead. (Carl de Souza/AFP/Getty Images)

Daveed Gartenstein-Ross, a senior fellow at the Washington-based Foundation for the Defense of Democracies, keeps a database of terror attacks in Somalia and the region. It reveals that those in Kenya are becoming more sophisticated and more deadly. “Clearly there is a focus on Kenya and an increased pace of activities in Kenya,” he said.

The escalation is easily observed in fatality counts. With the exception of the armed assault on the Westgate Mall, the deadliest incident of 2013 was a December grenade attack in Nairobi that killed six and injured 34. In contrast, bombs placed in Nairobi’s Gikomba market on May 16 of this year killed 10 and injured 70. Explosions in Mombasa and Nairobi over a single weekend in early May killed seven and injured 80.

The technological sophistication is increasing, as well. In March police in Mombasa belatedly discovered a large and sophisticated truck bomb in a vehicle impounded by officers days earlier. A Western diplomat said the device was “on a scale not previously seen in Africa.”

The concern is that suicide bombings — used by Al Shabaab as a prelude to gunmen in their more complex attacks in Somalia — may be the next step. Djibouti, another country that hosts both US and French military bases and contributes troops to the African Union force battling Al Shabaab in Somalia, suffered its first suicide bombing in May. Uganda, the first country to send troops to Somalia under the AU banner, was hit by suicide bombers during live screening of the 2010 World Cup soccer tournament.

Police officers process the scene of a car bomb explosion at the entrance to the Pangani police station. (Tony Karumba/AFP/Getty Images)

A car bomb that exploded at Nairobi’s Pangani police station on April 23 could either have been a bombing gone wrong or Kenya’s first suicide attack.

“The concern is whether [Al Shabaab] are going to be able to find and deploy fighters willing to die for the cause here,” said Matt Bryden, director of the Nairobi-based think tank Sahan Research. Until then grenade attacks and improvised explosive devides (IEDs) are probably “the limits of their capabilities,” said Bryden.

Kenya’s response to the terrorism threat has included mass roundups of predominately ethnic Somalis suspected of being illegal aliens. Thousands have been detained, and at least 359 deported to Somalia since "Operation Usalama Watch" began in April. Others have chosen to leave. Human rights groups have criticized the crackdown.

“It appears that Operation Usalama Watch is being used as a pretext for the blanket punishment of the Somali community in Kenya,” said Michelle Kagari, East Africa regional director at Amnesty International.

The Masjid Musa mosque in Mombasa was raided in February by armed police officers wearing body armor and helmets. One person died and more than 100 were rounded up in the daylight assault. Most suspects were subsequently released without charge.

There are fears that violent and indiscriminate security operations based on ethnic and religious profiling are counterproductive and may work as a recruiting tool for militants.

In an audio and video message posted online last month, for example, Al Shabaab’s leader Ahmed Godane threatened Kenya and urged Muslims to avenge the deaths of two radical preachers from the same mosque that was targeted by police officers in February.

Abubakar Shariff Ahmed, aka Makaburi, and Aboud Rogo, who both preached jihad and were accused of being Al Shabaab recruiters, were shot dead in Mombasa in April 2014 and August 2012, respectively. No one has been charged with either murder. Human rights and Muslim groups blame Kenya’s US-funded Anti-Terrorism Police Unit for these and other extrajudicial killings.

Though the facts of those killings are difficult to establish, the widespread indiscriminate harassment of ethnic Somalis is well-established.

“It’s hard to judge how many terrorist attacks have really been averted by these operations,” said Jonathan Horowitz, legal officer at the Open Society Justice Initiative in New York. “What we do know is there are very few successful prosecutions or convictions and very high numbers of human rights violations.”

Horowitz said the Kenyan government is expending “massive amounts of resources in a manner that has been proven to be ineffective.”

The threat from within

Still more worrisome is the possibility that the Kenyan government is targeting the wrong demographic entirely — that, in fact, officials have missed a crucial development: the internationalization of Al Shabaab and the growing presence of a homegrown Kenyan terrorist threat.

In fact, the few arrests and fewer convictions in connection with Kenya’s terrorist attacks point to a domestic threat, not a foreign one. Kenyan police identified one of the suspected Pangani car bombers as a Kenyan university student and son of a military officer. A man convicted in October 2011 of a Nairobi grenade attack was a Muslim convert from western Kenya.

Kenyan Elgiva Bwire Oliacha stands next to exhibits presented to courts before being sentenced to life imprisonment after he admitted involvement in a grenade attack and membership of the Al Qaeda linked Somali Al Shabaab militant group. (Simon Maina/AFP/Getty Images)

“Just because the group presenting the threat is Somali-based that doesn’t mean the agents it uses to carry out attacks are Somalis from Somalia,” said J Peter Pham, director of the Africa Center at the Atlantic Council in Washington.

“Al Shabaab is increasingly taking on a regional dynamic and agenda, trying to project themselves as Al Qaeda’s primary African operation,” said Pham.

Non-ethnic-Somali Kenyans have always been a large cohort within Al Shabaab, but as the group faces military pressure and territorial losses in Somalia, the Kenyan mujahedeen are thought to be coming home.

“There are hundreds of Kenyans who have been in Somalia since 2007, who have been trained and had exposure to battlefield conditions. We should expect to see a hardcore among them willing and able to carry out the kind of complex attacks that Shabaab is now capable of,” said Bryden.

What the returning militants find in Kenya is a large pool of potential recruits among a marginalized and threatened Muslim and Somali minority in the coastal region, the northeast and Nairobi.

“There is a mass of young people in Kenya who, because of their economic and social circumstances, are a resource for terrorists that is not Somalia-based that can be manipulated and used,” said Kahumbura.

“A small number of Al Qaeda or Al Shabaab followers are able to mobilise a much larger group,” he said.